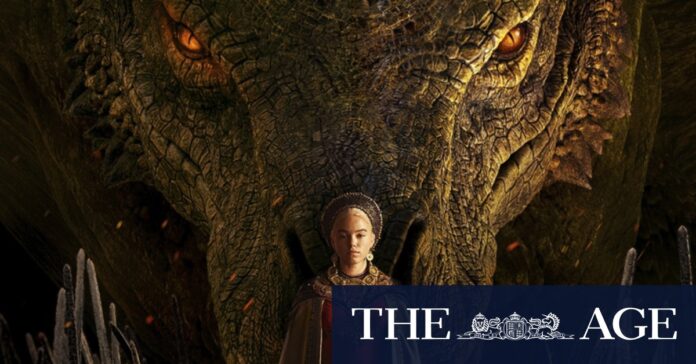 The first poster from the highly anticipated prequel to Game of Thrones have been released, featuring Australian actress Milly Alcock in the role of young Princess Rhaenyra Targaryen.

The series, House of the Dragon, premieres later this year but the US broadcaster HBO has released the poster art ahead of a major marketing campaign aimed at building momentum around the show’s launch.

The “key art” is a set of posters featuring the key characters of the story; Alcock was revealed as a member of the cast last year, though HBO has been tight-lipped about any specific story details.

The series is based on George R.R. Martin’s book Fire & Blood, which is set in Westeros, the same world as Game of Thrones, but is not part of the book-cycle on which the Game of Thrones series was based.

House of the Dragon tells the story of House Targaryen, the same ruling house which will later produce Daenerys Targaryen, who was played by Emilia Clarke in Game of Thrones. The series is set 200 years before the events of Game of Thrones.

Alcock, 22, is best known for roles in the television series The Gloaming, Reckoning and Upright. She also had roles in A Place to Call Home, Janet King and Wonderland.

The official House of the Dragon Twitter account shared the new poster featuring Alcock and the show’s tagline “Fire will reign”.

Gleeson opens up on NBA gig with Toronto Raptors