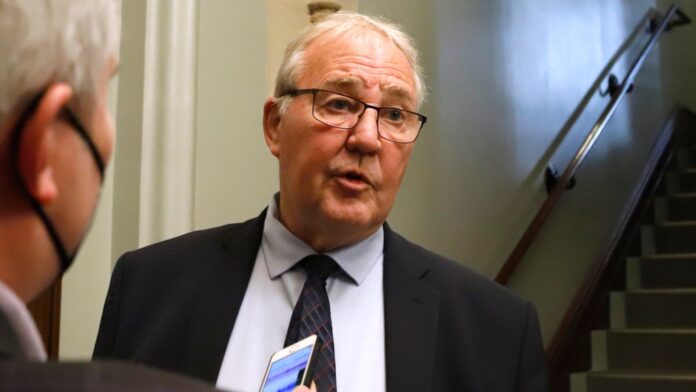 
Emergency Preparedness Minister Bill Blair is denying anyone in the federal government interfered in the RCMP’s investigation into the Nova Scotia mass shooting, coming to the defence of Commissioner Brenda Lucki, who is at the centre of accusations that there was pressure to release details.


“There was no pressure brought to bear and no interference with the operational decisions of the RCMP,” Blair told reporters on Wednesday. “I made no effort to pressure the RCMP to interfere in any way with their investigation. I gave no direction as to what information they should communicate. Those are operational decisions of the RCMP. And I respect that and I have respected that throughout.”


Allegations were raised Tuesday that the worst mass shooting in Canadian history was being used by Prime Minister Justin Trudeau and his government to help push forward a new gun ban, based on documents released as part of the Mass Casualty Commission probing the April 2020 mass shooting that left 22 people dead in Nova Scotia.


According to the documents, 10 days following the Nova Scotia killing rampage, Lucki shared disappointment with the Nova Scotia division, after wanting them to release specific information on the firearms used by the perpetrator.


In handwritten notes, Nova Scotia RCMP superintendent Darren Campbell wrote that Lucki indicated she promised Blair, the then-minister of public safety, and the prime minister’s office that the RCMP would release this information, and that this was tied to pending gun control legislation intended to make officers and the public safer.


At the time, the Nova Scotia RCMP said that releasing additional information would jeopardize the ongoing investigation into the perpetrator’s access to firearms.


Days later, the Prime Minister announced a ban on 1,500 assault-style weapons, including weapons used in the Nova Scotia shooting.


In a statement issued late Tuesday night, Lucki said she would never jeopardize an investigation, and that she “did not” interfere in this case, but called it a “tense discussion.”


“I regret the way I approached the meeting and the impact it had on those in attendance. My need for information should have been better weighed against the seriousness of the circumstances they were experiencing. I should have been more sensitive in my approach,” Lucki said.


“It is important to note that the sharing of information and briefings with the minister of public safety are necessary, particularly during a mass shooting on Canadian soil. This is standard procedure, and does not impact the integrity of ongoing investigations, or interfere with the independence of the RCMP,” Lucki said.


Facing several questions about the matter on Wednesday, Blair came to Lucki’s defence, but didn’t directly respond when asked if he still had confidence in her as the RCMP’s lead officer.


Blair said that the tragedy was “unprecedented, and incredibly difficult, and traumatic,” for the whole national police force, and that the differing account coming from Lucki’s colleagues is something that is “entirely between the Commissioner and her subordinates.”


He also noted that, prior to the shooting, the Liberals campaigned in 2019, and later followed through, with a mandate commitment to ban assault-style firearms.


The opposition parties have pounced on the story, demanding an emergency debate and a full parliamentary investigation into what NDP Leader Jagmeet Singh has called “troubling allegations of interference.”


“These allegations suggest that pressure from the government risked undermining the investigation into the worst mass-shooting in Canadian history — all for their own political agenda. Nova Scotians have suffered enormous losses and the mishandling of the investigation into this shooting is making it incredibly difficult for the families of those who were murdered,” Singh said in a statement issued Wednesday morning.


“The idea that this government — that any government — would use this horrific act of mass murder to gain support for their gun policy is completely unacceptable.”


Dismissing the denials issued by Blair and Lucki, several Conservative MPs decried the government allegedly pulling strings, and accused them of undermining the notes taken by RCMP officers in Nova Scotia.


“Conservatives believe superintendent Darren Campbell when he says that Brenda Lucki the commissioner pressured him, pressured the RCMP, and the reason she did it was because she had made a commitment, or she had been pressured by the prime minister’s office and or the public safety minister’s office,” said interim Conservative Leader Candice Bergen. “This is disgusting.”

How will R. Kelly sentence impact other trials?

‘Not going to happen in our lifetime’: First-time homebuyers share their struggles with purchasing a home

Applying for a passport in Canada? What you need to know

For K-pop supergroup BTS, questions remain about its future