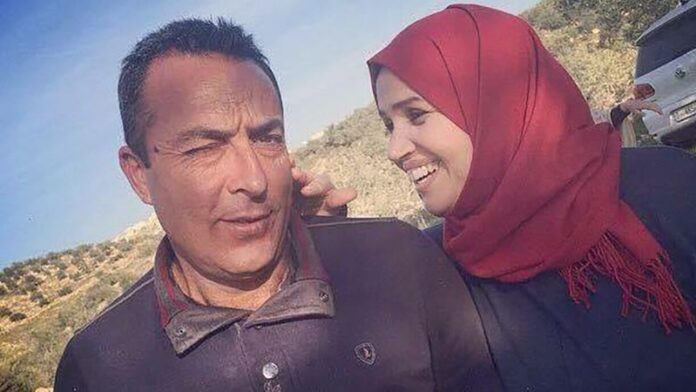 Aisha Al-Rabi was driving with her husband, Yacoub, and 8-year-old daughter to their home in the West Bank on a cool Friday night last October. The Palestinian mother of nine needed to hurry back to prepare for an older daughter’s upcoming wedding.

As they neared the Zaatara checkpoint, south of Nablus, Yacoub heard someone yell “Arabs!” Suddenly, a stone smashed into their car.

“I looked at her and I saw her face and head full of blood,” Yacoub Rabi, Aisha’s husband, told CNN. “She didn’t make any noise.”

He rushed his wife, 48, to a hospital while his daughter screamed in the back, but Aisha was dead on arrival. This was not a freak accident, according to Israel’s internal security agency, known as the Shin Bet, who opened an investigation into the attack by suspected Israeli settlers.

On Sunday, the security agency announced the arrest of several Jewish teenagers on a number of terrorist offenses including murder.

The suspects, all minors, studied at the nearby Pri Ha’aretz yeshiva, or religious school, next to the West Bank settlement of Rehelim, according to a statement from the Shin Bet.

Under international law, Israeli settlements in the West Bank, and the presence of settlers there, is considered illegal because the international community – through repeated United Nations Security Council resolutions – has declared the West Bank, along with Gaza and East Jerusalem, to be occupied territory, though Israel disputes that characterization.

Revealing details of their investigation, the Shin Bet described how on the morning after the attack a group of activists arrived at the religious school in order to “instruct youths learning at the yeshiva on how to prepare for and deal with [Shin Bet] interrogation.”

While investigating the suspects, the Shin Bet also found what it called anti-Zionist and extremist material. One of the suspects allegedly hung an Israeli flag with “death to Zionists” written on it next to a swastika in his room. Other items uncovered included videos showing a number of the suspects burning Israeli flags.

The detained teens were prevented from meeting with their lawyers for the first six days while being interrogated by investigators because they were “suspected of serious acts of terror,” the Shin Bet said. That has prompted strong criticism from the teenagers’ lawyers, who said their young clients had had their rights violated.

Lawyer Adi Keidar from the organization Honeinu, which is representing some of the suspects, attacked the Shin Bet’s tactics.

“This child, from the morning to the night, is being kept in terrible conditions,” Keidar told Israeli TV. “He is sleeping on the floor. All his rights have been violated. If that is not torture I don’t know what you call torture. I saw a child exhausted, tired, broken, and hungry. The children I saw have no connection to this event and we should be worried.”

The Shin Bet denies any wrong doing, adding that the boys never complained and that they were treated according to Israeli law and under the supervision of doctors in the prison authority.

“Claims to the effect that they are being denied their rights in violation of the law are without any foundation and are designed to divert discussion from the severe accusations for which the suspects are being held and questioned,” the Shin Bet said. The security agency also condemned the criticism as a “deliberate and continued effort to denigrate the organization and its employees and its activities.”

This isn’t the first incident of settlers allegedly attacking and killing Palestinians. In 2015, three members of the Dawabshe family, including an 18-month-old toddler, were killed in an arson attack by Jewish extremists in the Palestinian village of Duma in the West Bank. Two settlers were indicted amid accusations of abuse by the Shin Bet, which the agency also denied.

This latest incident is likely to further polarize Israeli society as campaigning heats up ahead of the April 9thparliamentary election. Saturday evening, scores of supporters of the teens clashed with police outside the residence of Israeli Prime Minister Benjamin Netanyahu in Jerusalem.

One lawmaker from Netanyahu’s Likud Party compared the Shin Bet to the KGB, the feared security agency of the former Soviet Union.

“Every day stones are being thrown at vehicles in Judea and Samaria, and if you are wondering why you don’t hear about it, it’s because they are Palestinians throwing stones on Jews,” Member of Knesset Nava Boker wrote on Twitter, referring to the West Bank by its biblical name.

“But when Jewish boys are suspected of throwing stones, suddenly they come up against KGB investigation techniques,” wrote Boker. “It would be better if the Shin Bet would deal with preventing murderous Palestinian terror and not torturing Jewish boys.”

The Israeli military, along with the Shin Bet, routinely arrest Palestinian stone-throwers, many of which are children. The Shin Bet emphasized that it “will not slacken in its continuing counter-terrorist efforts, whether it is against Jewish or Palestinian terrorism.”

The news of the arrests gives little comfort to the Al-Rabi family.

“If the attack had been carried out by Arabs, they would have caught them within a day or two,” Yacoub Rabi told the Jerusalem Post, a local Israeli newspaper. “We said from day one that this was an attack that was carried out by settlers. It was not the first incident of its kind against Arabs in the same area.”

“The arrest of the settlers is not going to bring back my wife. Anyone who does something bad should pay the price. I don’t want more people to be harmed.”