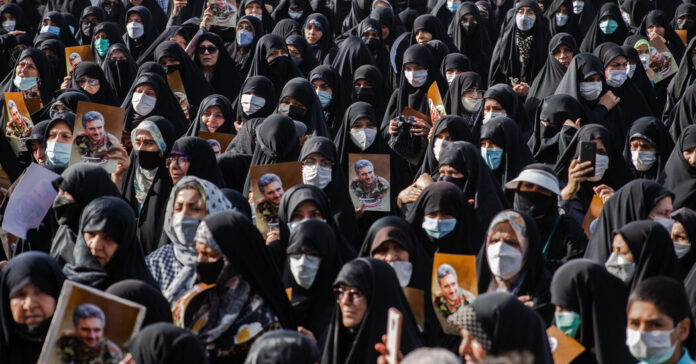 They both graduated from Iran’s top universities — young, healthy and athletic — before they suddenly fell ill in late May. The two scientists grew sicker and sicker, and ended up in the intensive care units of hospitals in two different cities nearly 400 miles apart.

Then, they both died within days of each other.

Iran believes Israel killed them by poisoning their food, according to an Iranian official and two other people with ties to the government who spoke on condition of anonymity because of the sensitivity of the subject. One of them, Ayoub Entezari, was an aeronautical engineer who worked for a military research center, and the other, Kamran Aghamolaei, was a geologist.

Compounding the mystery behind their deaths, Israeli media and Persian news channels abroad reported that Mr. Aghamolaei worked at Iran’s Natanz nuclear facility. But friends denied that, and said he worked for a private geological research company, and The New York Times could not corroborate that he had any ties to the government or any weapons program.

Mr. Entezari had a doctorate in aeronautics and worked on projects related to missiles and airplane turbines for a government aerospace center in the city of Yazd, about 390 miles southeast of the capital, Tehran.

He developed symptoms of food poisoning after attending a dinner he was invited to in Yazd, according to a staff member of a senior Iranian official. The host of the dinner party had disappeared and authorities were searching for him, according to the staff member, who could not be identified because he was not authorized to speak publicly.

Mr. Aghamolaei had just returned to Tehran from a business trip to the northwestern city of Tabriz when he developed intense nausea and diarrhea that worsened day by day until his organs failed and he died, according to a friend.

If, as Iran suspects, these mysteriously similar deaths were targeted killings, it would fit the pattern of a shadow war with Israel that has seen both sides strike each other with just enough secrecy to avoid a full blown war.

Now that shadow war appears to be intensifying. In the past two weeks alone, a series of deaths linked to Israel have rattled Iran. Israel appears to have broadened its targets from senior figures connected to the nuclear program to military personnel and lower level scientists.

A spokeswoman for the Israeli prime minister’s office declined to comment on the two recent deaths inside Iran.

But Israel has worked clandestinely for years to undermine Iran’s nuclear and weapons programs, including by targeted killings of experts involved in those endeavors. It has also attacked Iranian military sites developing advanced drones and missiles.

Iran, in turn, has tried to target Israeli citizens around the world, and armed and funded regional militias hostile to Israel, such as Hezbollah in Lebanon.

But much of the conflict has centered around the nuclear program.

Israel staunchly opposes the efforts, albeit faltering, to resurrect the 2015 nuclear deal between Iran and world powers — which President Donald J. Trump pulled out of in 2018. The agreement eased punishing economic sanctions on Tehran in exchange for limiting Iran’s nuclear activity.

Israel feels the deal does not limit Iran’s nuclear activities enough at a time when it is deeply concerned that the country is within close reach of producing enough enriched uranium to make a nuclear weapon.

Supporters of the nuclear deal, however, say it will limit Iran’s uranium enrichment, allow the United Nations nuclear watchdog to resume monitoring of the Iranian nuclear program and reduce the threat of Iran developing nuclear weapons.

Iran has long maintained that its nuclear program is for peaceful purposes only. But an American intelligence assessment years ago concluded that the country once had a nuclear weapons program, then halted it in 2003.

If the negotiations to revive the 2015 nuclear deal collapse and Iran accelerates its nuclear activities or further reduces cooperation with U.N. monitors, the covert war with Israel risks blowing up into an open conflict.

“Whether or not there is a nuclear deal, this type of activity will likely intensify — Iran extending its reach around Israel, Israel extending its reach deeper inside of Iran,” said Henry Rome, an Iran analyst with the Eurasia Group, a political risk consultancy.

The quickening pace of attacks in Iran, taken together with recent comments by Israeli leaders, suggest a shift in Israel’s strategy.

“The past year has been a year of changing course in Israel’s strategy vis-à-vis Iran,” Prime Minister Naftali Bennett of Israel said on Tuesday at a meeting of the parliamentary foreign affairs and defense and foreign affairs committee. “We have shifted into a higher gear. We are acting at all times and places, and we will continue to do so.”

Then, the two scientists died.

Mr. Entezari, 35, died on May 31. A colleague from the military research facility where he worked said on social media that he had been well the night before he suddenly fell ill, and Iranian media reported that nobody else in his family had gotten sick, although they had all eaten the same food.

The governor of Yazd Province, where he lived, presented his family with a framed certificate of condolence that deemed him “a martyr” and thanked the family for its sacrifice to the nation. Iran bestows the label martyr as an honor on those killed by enemy fire or in the line of duty to their country. A City Council member in Yazd called his death “biological terror.”

But in the face of Israel’s repeated breaches of Iranian security, officials quickly pulled back on calling Mr. Entezari a martyr and on other details that could point to another Israeli attack — something that could potentially embarrass the authorities.

The governor’s public relations office retracted the martyr reference two days later, saying it was an error. The prosecutor’s office in Yazd denied Mr. Entezari was an aerospace engineer, and instead said he was an ordinary employee of an industrial company.

Photographs and videos published in Iranian media dating to 2019 show Mr. Entezari making a presentation to then-President Hassan Rouhani at the Ghadir Industrial Turbines Company, where Mr. Entezari worked. These images were consistent with the notion that he worked at this government facility, and a statement from his university’s alumni association said he was indeed an aerospace engineer.

Mahmoud Entezari, a relative who leads tours in Yazd, said on his Instagram page that the engineer had worried that his life was in danger after the photographs of him with Mr. Rouhani surfaced in local media. The photographs, he had told his relative, were supposed to remain confidential.

Iranian officials have been even quieter about Mr. Aghamolaei, 31, who died on June 2.

The only official mention of Mr. Aghamolaei’s death was a condolence statement from the president of Tarbiat Modares University in Tehran, which said he was a doctoral student in geology. The statement then claimed he had died of a heart attack in his hometown, Izeh, a small, working-class area in the southern Khuzestan Province.

The family is waiting for the result of an autopsy report by the government-run coroner’s office, said the friend who provided the account of his suddenly falling ill after eating. But given the sensitivity around the case, relatives worry the autopsy result might not be shared with them.

Attitudes toward crime in Arab sector changing among Jews and Arabs