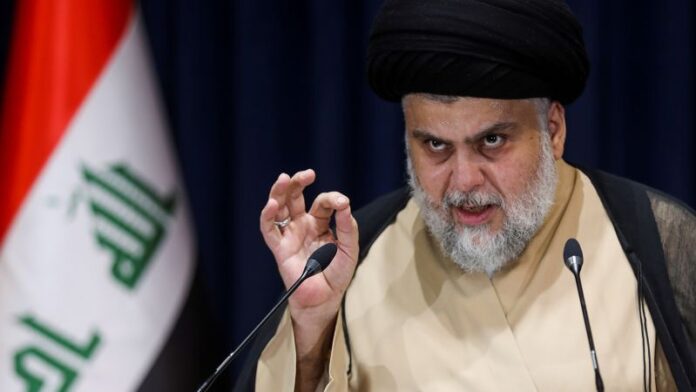 Editor’s Note: A version of this story first appeared in CNN’s Meanwhile in the Middle East newsletter, a three-times-a-week look inside the region’s biggest stories. Sign up here.

After eight months of political paralysis, the kingmaker of Iraqi politics has ordered his bloc to withdraw from parliament.

The stepdown of Shiite Muslim cleric Moqtada al-Sadr’s entire group of 73 lawmakers is the largest shakeup in Iraqi politics since an October election saw Iran-backed Shiite blocs losing seats to the Sadrists. The Sadrists now appear to have stepped back from parliamentary politics.

“This is a tectonic shift that threatens to derail the post-2003 political order in its entirety,” said Ranj Alaaldin, nonresident fellow in the Foreign Policy program at the Brookings Institution, a think tank in Washington, DC.

In a handwritten statement, Sadr said that his request for his lawmakers to resign was “a sacrifice from me for the country and the people to rid them of the unknown destiny.”

Sajad Jiyad, a fellow at The Century Foundation think tank in Washington DC, said the move “has changed the political discourse.”

The cleric is immensely popular in Iraq. For years he has positioned himself against both Iran and the United States, and in October emerged as the biggest winner in a parliamentary election that threatened to sideline Iran-aligned Shiite blocs that have long dominated the oil-rich country’s politics.

But politics has since been in a stalemate as bickering and accusations of corruption have stalled the presidential election and hindered the formation of a government.

“If the Sadrist bloc remaining [in parliament] is an obstacle to government formation, then all lawmakers of the bloc are honorably ready to resign from parliament,” said Sadr in a televised speech on Thursday, as he set the stage for the resignation.

Experts say that according to the procedure, once a lawmaker resigns and the process is finalized, the next lawmaker with the largest batch of votes steps in as a replacement.

“This will redistribute 73 parliamentary seats among various political blocs,” wrote Abbas Kadhim, a senior fellow at the Atlantic Council think tank, on Twitter, adding that Iran-aligned Shiites are expected to take over those seats, along with some independents.

So is Sadr giving in to Iran-backed groups, or is this simply an attempt to showcase his power in the streets, where he has tremendous influence? Analysts say it is likely to be the latter.

“Sadr’s secret weapon is his vast grassroots network of supporters and dominance on the street,” said Alaaldin, adding that “the withdrawal of Sadrist MPs is a signal of intent to confront his rivals on the street.”

The resignations came after the Iran-aligned Shiite blocs opposed Sadr’s government formation initiative, said Ihsan Al-Shammari, a politics professor at Baghdad University and head of the Iraqi Centre for Political Thought. It also comes as Sadr realizes that he cannot create a national majority government with the obstruction of the rival bloc.

Sadr may be signaling to his supporters that he has done all he can to try to form a government with his Iran-aligned Shiite rivals, said Jiyad. The move may also be a threat to other parties, showing them that they cannot do without him, he added.

The cleric’s influence is far from diminished, said Al-Shammari. “Sadr will continue in the direction of popular opposition … I think [this] will double his political power.”

Analysts say that sidelining Sadr and his party from government will result in chaos, and that any government born out of Sadr’s isolation “will be a dead one.”

“This will lead to anger from Iraqis and from Sadr’s supporters,” Al-Shammari said. “They will not agree to see their leader politically broken or isolated.”

Iran and Venezuela on Saturday signed a 20-year cooperation plan in Tehran, with the Islamic Republic’s supreme leader saying the two allies will continue to resist pressure from Washington.

The United Arab Emirates on Monday banned the public screening of the Walt Disney-Pixar animated feature film “Lightyear” in cinemas ahead of its release this week, a government body said. The Ministry of Youth and Culture’s Media Regulatory Office wrote on Twitter that the film violated the country’s media content standards, without specifying the violation.

Security concerns raised by Turkey in its opposition to Finland’s and Sweden’s NATO membership applications are legitimate, NATO Secretary General Jens Stoltenberg said on Sunday during a visit to Finland. “We have to remember and understand that no NATO ally has suffered more terrorist attacks than Turkiye,” Stoltenberg said.

A 98-million-year-old fossil discovered in the Egyptian desert six years ago has been revealed to be a new kind of large-bodied meat-eating dinosaur.

An expedition team from Egypt’s Mansoura University unearthed the fossil at the Bahariya Oasis in the country’s Western Desert region in 2016. The fossil was identified in a study published by the UK’s Royal Society on Wednesday as “the oldest definitive record of the clade from Egypt and northeastern Africa.”

The yet-to-be-named species belongs to a family of dinosaurs called “Abelisauridae,” described by the Carnegie Museum of Natural History as “a kind of bulldog-faced, small-toothed, tiny-armed theropod that is estimated to have been roughly six meters (20 feet) in body length.”

“The Bahariya Oasis would’ve been one of the most terrifying places on the planet … how all these huge predators managed to coexist remains a mystery,” study leader Belal Salem was cited as saying by the Carnegie Museum.

The oasis is a gold mine for paleontologists due to the variety of fossils found there. Unfortunately, all the fossils collected there prior to World War II have been destroyed. In 1944, a collection of fossils discovered by German paleontologist Ernst Stromer was obliterated by Allied bombs that hit a building that housed the collection in Munich.

When will Israel’s seashores get well from the tar spill?