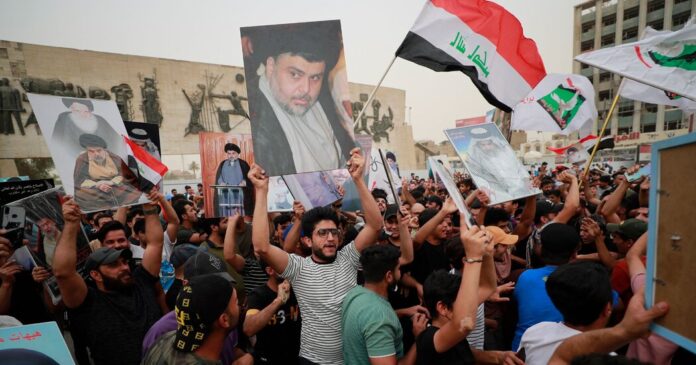 Seven months of efforts to form a new government in Iraq were in turmoil on Monday, a day after the powerful Shiite cleric Muqtada al-Sadr directed members of Parliament who are loyal to him to resign from the seats they won in an October election.

Mr. Sadr, who has become one of the biggest political forces in Iraq since emerging in 2003, has no formal role but commands the allegiance of the single largest bloc in the 329-seat Parliament. The 73 lawmakers of his movement submitted their resignations on Sunday after the collapse of months of negotiations by Mr. Sadr to form a coalition government with Sunni and Kurdish partners.

On Monday, Mr. Sadr’s candidate for prime minister, Jaafar al-Sadr, a cousin of the Shiite cleric and currently the Iraqi ambassador to London, said in a post on Twitter that he was withdrawing his candidacy.

The talks on forming a government broke down amid disagreements over who would be president. Under Iraq’s parliamentary system, established after a U.S.-led coalition toppled Saddam Hussein in 2003, the president nominates a prime minister and cabinet ministers. The mercurial Muqtada al-Sadr suggested that in abandoning the negotiations, he was sacrificing his bloc’s hard-won gains in the elections last year so that a government could be formed.

“This step is considered a sacrifice for the homeland and the people to save them from an unknown fate,” Mr. Sadr said in a statement. “If the survival of the Sadrist bloc is an obstacle to the formation of the government, then all representatives of the bloc are ready to resign from Parliament.”

His announcement culminated months of political paralysis that underscored the dysfunction of Iraq’s political system and the fragmentation of the multiple Shiite Muslim political blocs. Those inter-Shiite divisions have supplanted sectarian tensions between Sunni and Shiite groups in past years as a main source of Iraqi instability.

Mr. Sadr, the son of a revered Shiite cleric assassinated during Saddam Hussein’s regime, formed a militia in 2003 to fight American forces after the U.S. invasion of Iraq turned into an occupation. He also battled Iraqi government forces in Baghdad and in the southern city of Basra before disbanding the fighters.

It was not immediately clear whether the resignations were merely a negotiating tactic on his part or a real break with parliamentary politics. But his withdrawal from Parliament and a related announcement that he was closing most Sadr offices around the country raised fears that he could replace political negotiations with destabilizing street protests — something he has used before as a lever of pressure.

“With the Sadrists apparently out of the actual political process, their history is that when they are not engaged in politics, they’re out in the streets,” said Feisal al-Istrabadi, director of the Center for the Study of the Middle East at Indiana University.

Mr. Sadr, who presents himself as an Iraqi nationalist, is considered the Iraqi Shiite political leader least tied to Iran. His withdrawal opens the door for other, Iranian-backed parties to make headway in forming a government.

The resignations themselves will not prompt elections. Instead, the candidates who received the next-highest number of votes in October would replace the Sadr loyalists in Parliament, according to legal scholars.

Constitutional experts said that the parliamentary resignations were effective after being accepted by the speaker, the Sunni politician Mohammed al-Halboosi, and did not require parliamentary approval.