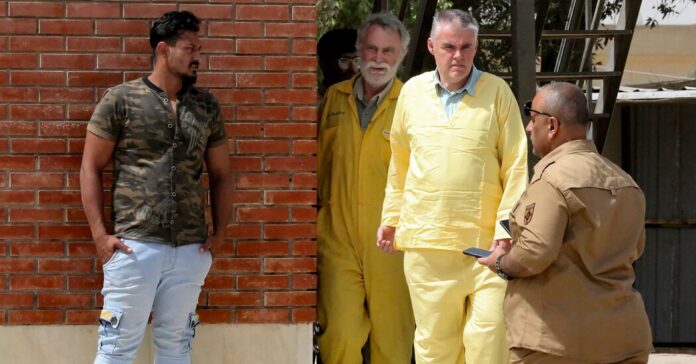 A British tourist who took pottery shards from an archaeological site was sentenced on Monday to 15 years in an Iraqi prison after a Baghdad court convicted him of trying to smuggle the artifacts out of the country.

The court found James Fitton, a 66-year-old retired geologist, guilty under a 2002 law that carries a sentence of seven to 15 years in prison for stealing artifacts or antiquities. Looting antiquities with weapons or with other people is a crime punishable by death in Iraq.

“The site where he took the small pieces and stones was open with no guards so he took some pieces as souvenirs,” said Mr. Fitton’s defense lawyer, Thair Soud, adding that his client made no attempt to hide the pieces, wrapping them in Kleenex and putting them in his luggage.

The harshness of the punishment has raised questions in a country where antiquities looting is rampant but few Iraqis are known to have faced such severe sentences in recent years. Mr. Soud, who said he was extremely surprised by the sentence, maintained the items had no commercial value and said he would appeal.

Mr. Fitton was part of a British-based tour group on a visit to Iraq in March when they toured the Sumerian site of Eridu in the south. He told the court that while at the site — which, like many of Iraq’s archaeological sites, is largely unexcavated and unguarded — he picked up shards of pottery and stones to take them home as souvenirs. He said he did not know that was illegal.

Airport security found 12 pottery shards and stones in Mr. Fitton’s luggage as he and other tour group members were flying out of Baghdad in March.

The British tour director Goeff Hann, who was 85, and in ill health, was prevented from being medically evacuated out of the country after suffering a stroke because he was wanted for questioning in the case, according to British media. Hinterland Travel, the tour company, said Mr. Hann died in a Baghdad hospital on April 12. Mr. Hann, the founder of the adventure travel firm, had led trips to Iraq for years and was co-author of one of the few guidebooks to the country.

The court on Monday acquitted another tourist from the same group, 60-year-old German citizen Volker Waldman, who had two artifacts in his luggage, after accepting his defense that he had been given the items by Mr. Fitton to carry.

Iraq’s culture minister, Hassan Nadhem, said in a telephone interview that his ministry had no input into the sentencing, saying the ministry’s only role was providing experts to confirm that the items were artifacts from Eridu.

While the minister had no comment on Mr. Fitton’s specific case, he did say: “We support any kind of legal action against those who try to steal and smuggle artifacts.”

The current Iraqi government has placed a major focus on repatriating looted antiquities from abroad, including artifacts purchased by the U.S.-based Hobby Lobby chain for its Museum of the Bible in Washington, D.C. The most high-profile of the pieces, a tablet with a fragment of the world’s oldest known epic poem, was returned this year to Iraq and is now on display at the Iraq Museum in Baghdad.

Iraq, ancient Mesopotamia in antiquity, is known as the cradle of civilization, and was home to the first known cities that sprung up between the Tigris and Euphrates rivers. Widespread looting of artifacts began after 1991 when the dictator Saddam Hussein temporarily lost control of the south of Iraq.

In 2003, thousands of pieces were stolen from the Iraq Museum after the U.S. military deployed for the invasion of Iraq stood by while it was looted.

Mr. Nadhem said looting at archaeological sites, most of which have not yet been excavated by archaeologists, has been a major problem in Iraq.

But he said he did not know of any Iraqis who, in the past two years since he has been minister, had been convicted on similar charges.

Iraq, which receives millions of religious pilgrims a year, has a nascent sector catering to Western tourists traveling to see archaeological sites. Mr. Nadhem said he estimated the numbers at about 1,000 a year and did not think Mr. Fitton’s sentencing would affect the industry.

“The numbers are very small so I don’t think there will be an impact on this,” he said.

Energy crisis: How long will it last and what happens if...

Digital currencies an opportunity but IMF warns of trust cost

Making water in a desert, from daylight and air

For tech corporations close to Gaza, rockets are ‘again to the...