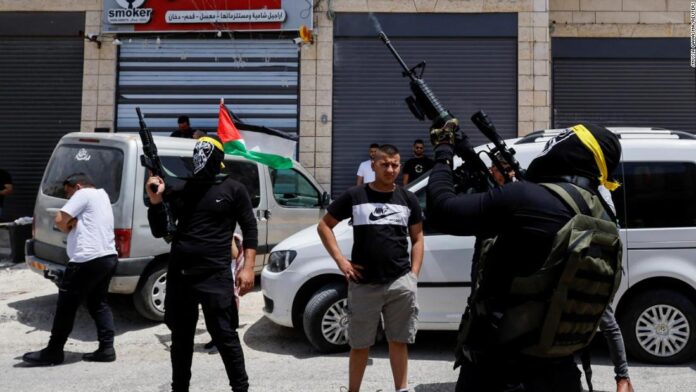 The family of the victim, Zaid Saeed Ghuneim, said the teenager had just finished dinner and was on his way to his grandparents’ house when he was shot. His brother, Yazan Ghuneim, told CNN that his brother was hiding in a garage when Israeli soldiers cornered him.

“They put two bullets in his legs, two in his back and one in his neck. They assassinated him,” Ghuneim told CNN at the family home. “He was my best friend. A lovely, peaceful boy who wanted to help everyone.”

An eyewitness to the shooting, Um Muhammad Al Wahsh, showed CNN a video she took immediately after the incident. In the footage, there is blood pooled on the floor of a parking garage and smeared across a car. According to Um Muhammad, she saw Zaid Saeed Ghuneim run into the garage and heard him plead for his life.

“He was screaming and kept saying, ‘I didn’t do anything! Don’t shoot me!'” she told CNN.

According to the Palestinian Ministry of Health, Ghuneim was rushed to hospital with bullet wounds in his neck and back. Doctors were unable to keep him alive.

In a statement provided to CNN, the Israeli military said that several soldiers in the Al-Khader area of Bethlehem were conducting “routine security activity” in the area when “suspects hurled rocks and Molotov cocktails at the soldiers, endangering their lives.”

In pursuing the assailants, the soldiers responded with live fire, injuring one of the suspects, according to the Israeli military. The statement added that soldiers provided initial medical treatment at the scene before transferring the injured to the Palestinian Red Crescent. The incident is now under review. The statement did not name Zaid Saeed Ghuneim.

This is the second killing of a minor by Israeli forces in less than a week, after a string of raids across the West Bank. While covering one of those raids, Palestinian-American journalist Shireen Abu Akleh was shot and killed by what the Palestinian Attorney General described as a targeted attack by Israeli soldiers.
Tensions have been steadily escalating across Israel and the Palestinian territories. In March, a spate of attacks by Palestinians killed 19 Israelis. In response, the Israeli military launched “Operation Breakwater,” conducting nearly daily raids across the West Bank to arrest suspects. Soldiers have since arrested dozens of West Bank residents and encountered violent resistance. The Palestinian Ministry of Health says at least 55 Palestinians have died because of Operation Breakwater.

According to the human rights group B’Tselem, Israeli forces also maintain an “open fire policy” across the West Bank, allowing the use of live ammunition to respond to even minor security incidents such as isolated rock throwing. The policy has resulted in several deaths, B’Tselem said, including two Palestinian teenagers shot and killed in Bethlehem in February of this year.

IDF cracking down on troops who smoke marijuana