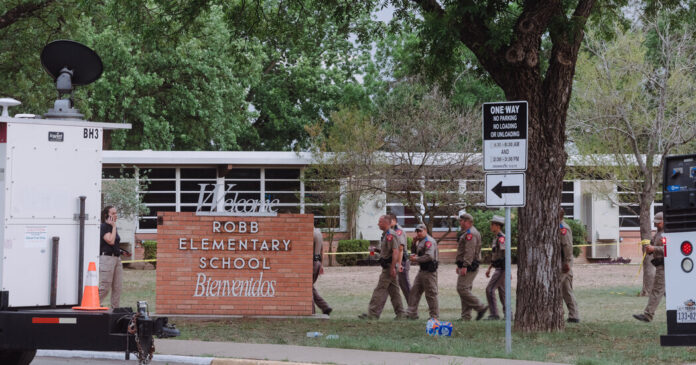 Read the latest about the deadly school shooting in Uvalde, Texas.

A gunman killed at least 19 children and two teachers on Tuesday in Uvalde, Texas, a small city west of San Antonio, in the deadliest school shooting since the murders at Sandy Hook Elementary School in Connecticut in 2012.

Here’s what we know so far.

The victims were mostly children.

Officials have not yet released the names or ages of the students, but the school taught second through fourth graders. In addition to the 19 children killed, several other children were wounded.

Two teachers were killed. Lydia Martinez Delgado said her niece Eva Mireles, a teacher of fourth graders who died in the rampage, had taught for 17 years and took pride in teaching mostly students of Latino heritage.

The gunman was identified as an 18-year-old who was a resident of the same county where the shooting took place and had attended a nearby high school. He died at the scene, the authorities said.

He was armed with a pistol and possibly a rifle, Gov. Greg Abbott said.

Investigators are still piecing together what happened and what his motivations were. The gunman appeared to have crashed a pickup truck through a barrier at the school before heading inside. It was not immediately clear whether the shooting took place in one classroom or several.

At least two law enforcement officials who had tried to engage the gunman were injured, neither seriously. “Upon entering the building, Agents & other law enforcement officers faced gun fire from the subject, who was barricaded inside,” Marsha Espinosa, an assistant secretary at the Department of Homeland Security, wrote on Twitter.

Shortly before the shooting, a 66-year-old woman who appeared to be the gunman’s grandmother was shot in her home in Uvalde. Officials are investigating whether there is a connection.

It continued a devastating pattern in the United States.

The shooting is one of the deadliest school attacks on record. It is also one of more than 200 mass shootings to have been recorded in the United States so far this year. Just 10 days earlier, a gunman fatally shot 10 people at a Buffalo grocery store.

Gun control is in the spotlight.

President Biden’s nominee to lead the Bureau of Alcohol, Tobacco, Firearms and Explosives was set to appear before the Senate Judiciary Committee on Wednesday. Steven M. Dettelbach’s confirmation would be a make-or-break moment for the president’s stalled agenda on gun control. Read more about Mr. Dettelbach here.

In an address to the nation on Tuesday, Mr. Biden did not call for a specific gun control proposal. “When in God’s name will we do what we all know in our gut needs to be done?” he asked.