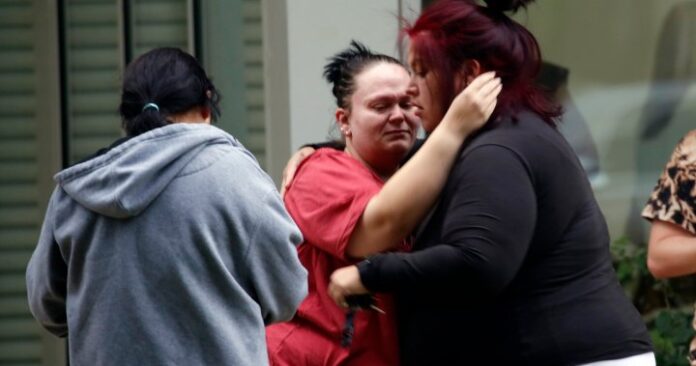 The victims of a mass shooting at an elementary school in Texas include a “loving 10-year-old little boy” and an “adventurous” teacher who was a caring mother and wife.

Officials in Uvalde on Wednesday notified all the families who lost loved ones in Tuesday’s slaying that saw 19 children and two teachers killed, CNN reports.

Those numbers may change as authorities provide updates, but what is known so far is that the victims were in the same Grade 4 classroom at Robb Elementary School.

Details about the victims are beginning to emerge. Here is what we know so far.

Uziyah Garcia was the “sweetest little boy” Manny Renfro has ever known.

“I’m not just saying that because he was my grandkid,” Renfro told The Associated Press about the eight-year-old boy who was among those killed.

“We started throwing the football together and I was teaching him pass patterns — such a fast little boy and he could catch a ball so good,” he said.

“There were certain plays that I would call that he would remember and he would do it exactly like we practised.”

Amerie Jo Garza, 10, was identified by her father, Angel, as one of the victims in a Facebook post that has now gone viral.

“Thank you everyone for the prayers and help trying to find my baby. She’s been found. My little love is now flying high with the angels above. Please don’t take a second for granted. Hug your family. Tell them you love them. I love you Amerie jo. Watch over your baby brother for me,” he said.

At least 21 dead after shooting at Texas elementary school: officials

That came as an update to a post he published hours earlier, asking for help finding his daughter.

“I don’t ask for much or hardly even post on here but please It’s been 7 hours and I still haven’t heard anything on my love,” he said.

Eva Mireles was a Grade 4 teacher at Robb Elementary School, according to the institution’s website.

The 44-year-old mother and wife was an educator for 17 years who loved running and hiking.

“She was adventurous. I would definitely say those wonderful things about her,” said 34-year-old relative Amber Ybarra, of San Antonio.

“She is definitely going to be very missed.”

Calls grow for U.S. gun control after Texas school shooting: ‘Our kids are living in fear’

Mireles was co-teacher with Irma Garcia for five years, the school’s website added.

Irma Garcia was a mother to four children and had been married to her husband for 24 years, Robb Elementary said on its website.

2:54
Update on the mass school shooting in Texas

Update on the mass school shooting in Texas

Garcia was in her 23rd year of teaching, all of them being at Robb Elementary.

She loved to barbecue with her husband, listen to music and take country cruises to Concan, Texas.

Garza said Xavier was eagerly awaiting a summer of swimming.

“He was very bubbly, loved to dance with his brothers, his mom,” she said.

“This has just taken a toll on all of us.”

2:48
Warriors coach Steve Kerr asks after Texas school shooting: ‘When are we going to do something?’

Warriors coach Steve Kerr asks after Texas school shooting: ‘When are we going to do something?’

On social media, pictures of smiling children have been posted with their families begging for information.

Classes at Robb Elementary had been winding down for the year and each school day had a theme. Tuesday’s was Footloose and Fancy. Students were supposed to wear a nice outfit with fun or fancy shoes.
Multiple children did survive the shooting, but were injured, a Texas public safety official said on Wednesday.

“We do know that there were multiple children that did survive, that were injured. I do not have the exact number at this time,” said Lieutenant Chris Olivarez in an interview with Fox News.

More information about the victims is expected to emerge as the investigation unfolds.

— with files from The Associated Press and Reuters