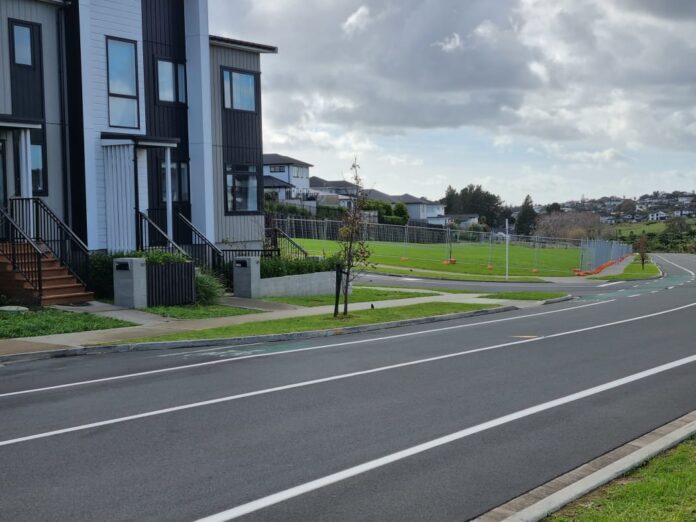 Residents of a northern Auckland street are up in arms about a Kāinga Ora development they fear could change the character of their neighbourhood.

But community representatives say there is no ‘NIMBYism’ (Not In My Back Yard) in their neighbourhood, and they remain hopeful housing officials will reconsider the plan for Bonair Crescent.

Two-storey townhouses on the Millwater street provide an impressive backdrop to the scenic park and children’s playground.

The Crown agency said it was listening to community concerns, and the houses were to meet existing need in the community.

She thought she had left that behind and did not want her family to live with that.

“When I think of 37 houses coming in next door it actually terrifies me. I don’t know why it has to be 37. Why can’t it be KiwiBuild?” she said.

“We bought three years ago and we thought we found the perfect place. We have the park across the road for our kids and our grandkids, and we just thought this was going to be our forever home and that we were safe.

“I’ve been really stressed out about it.”

Some of that concern was fuelled by gang trouble at a nearby Kāinga Ora development in Weir Lane, Silverdale.

Other residents said they felt ambushed to learn of the development without warning.

Not everyone RNZ spoke on Wednesday was against Kāinga Ora’s plans.

One man, Robert, said he was in two minds about it.

“I grew up in an area which has social housing in it and it was never really a problem there, so I don’t anticipate it here.

“There are plenty of areas of Auckland that have social housing, inner-city suburbs. I don’t believe it’s a problem there as well.”

Sue, who lived in the area nearby and whose family used the street’s playground, said she was not happy about it.

She held concerns about social housing coming into a family-based community.

About 2140 people have signed a petition on Parliament’s website against the development.

One of those was Fanci (Cor) Wok, although she said she was reconsidering her opposition.

“Initially I thought the houses were for people just wandering the streets, but this morning I heard it was for homeless families, so I might change my mind a little bit.

“It depends how [Kāinga Ora] set up to protect neighbouring properties and children, because there’s so many children coming here to play.”

More than 8700 households in Auckland are on the waiting list for public housing.

Local MP, National’s Mark Mitchell, said he hosted a meeting with Kāinga Ora officials at his office 10 days ago.

“[Kāinga Ora] sent a letter back to us last week, saying this has been elevated up to senior management and that they’re now working through a process, and they’ll come back to us with their own recommendations.”

Mitchell said he could not comment further while that process continued, but he denied opposition to the development was NIMBYism.

“No, absolutely not. They whole community recognises that there’s a need for social housing amongst the community. All of us want to see that met, so it’s nothing to do with that at all.”

Hibiscus and Bays Local Board chairman Gary Brown agreed it was not NIMBYism.

“It’s not a case of that. We have people in our community who are looking for housing, desperately. I think there’s about 200 families, so if we can find housing for them that would be fantastic.”

He was hopeful Kāinga Ora would listen to community concerns about the Bonair Crescent development.

Kāinga Ora regional director Taina Jones said she had met with the community and would continue to engage with residents.

“The overwhelming majority of our nearly 200,000 customers live well in their homes, and it is unfair to make generalisations that people who need public housing cause disruptive behaviour.

“These homes are intended to meet existing need from within the community. We have a number of homes in the Whangaparāoa area already, but there are currently 102 individuals and whānau from within the area of Silverdale, Millwater and Ōrewa who need homes.”

Jones said when people were placed into homes Kāinga Ora looked for connections with the local community.

“At this stage we cannot comment further on the plans, but we have committed to keeping the community informed.”

Surgeries, clinics on hold as thousands prepare to strike