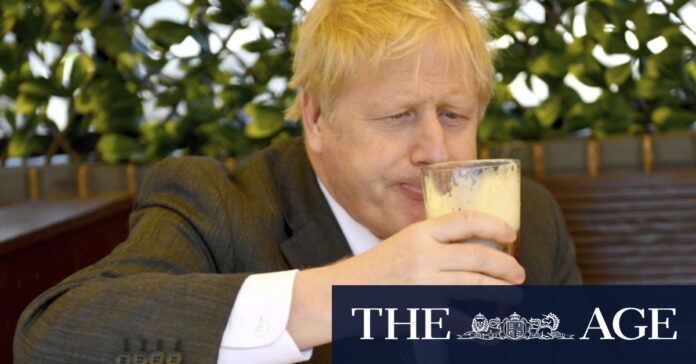 Many Tory MPs have said publicly they would suspend judgment on Johnson’s conduct until Gray had reported in full. He still faces an investigation by the House of Commons privileges committee into whether he lied to his fellow MPs over the affair.

In December, he insisted that “the rules were followed at all times”. The committee may not report until the end of the year.

Pressure on Johnson has increased this week when photos emerged of him holding a drink and toasting a departing staff member in November 2020, while the country was under strict stay-at-home measures.

Ahead of the report, a BBC investigation revealed that partygoers in Downing Street were so cramped together at a leaving do attended by Johnson that some were forced to sit on each other’s laps.

Officials speaking anonymously to BBC Panorama said they sometimes arrived at work to find bins overflowing with empty bottles from parties the night before and security guards who tried to stop one illegal gathering taking place were laughed at.

In January, the PM said sorry to the Queen after aides held a drunken party on the eve of Prince Philip’s funeral.

The police probe, which cost taxpayers an estimated £460,000 ($816,000) was asked to look only at potential criminal activity, with officers gathering testimony and photographic evidence from 12 events between May 2020 and April 2021. These included a notorious “bring-a-bottle” party in the garden of 10 Downing Street.

Johnson was fined only once, although he attended several rule-breaking parties. Rishi Sunak, the chancellor of the exchequer, and Carrie Johnson, the prime minister’s wife, also received fines.

The prime minister is expected to again apologise and take responsibility for the breaches, but turn his attention to a major cost-of-living package, which could slash council tax cut and other wider measures like slashing consumption tax on energy bills.

While the police focussed only on who broke the rules and when, the Gray aimed to establish responsibility and apportion blame.

Gray established herself as a meticulous arbiter of the ministerial code of conduct, which governs how members of the government should behave as the official in charge of propriety and ethics in the Cabinet Office from 2012 to 2018.

Lord Kerslake, the former head of the Civil Service, said on Wednesday he believed Johnson had “intentionally” misled Parliament over the scandal.

Boks in isolation after coronavirus scare