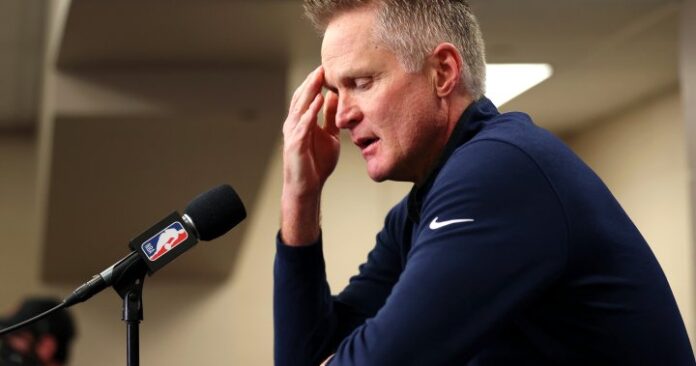 Steve Kerr, the head coach of the NBA’s Golden State Warriors, made a passionate speech against gun violence in the wake of a mass shooting at Robb Elementary School in Uvalde, Texas, that left 19 children and two teachers dead.

Kerr was set to do a pregame press conference ahead of Game 4 in the Warriors’ playoff series with the Dallas Mavericks on Tuesday. Instead, Kerr refused to speak about basketball and used his time in front of press cameras to call for substantive action against gun violence.

“In the last 10 days, we’ve had elderly Black people killed in a supermarket in Buffalo, we’ve had Asian churchgoers killed in Southern California, now we have children murdered at school. When are we going to do something?” Kerr said as he slammed his hand down on the table in front of him.


Kerr took a few seconds to take deep breaths before continuing: “I’m tired. I’m so tired of getting up here and offering condolences to the devastated families that are out there. I’m tired of the moments of silence. Enough.”

“There’s 50 senators right now who refuse to vote on H.R. 8, which is a background check rule that the House passed a couple years ago. It’s been sitting there for two years. There’s a reason they won’t vote on it: to hold onto power.”

H.R. 8 was passed in the U.S. Congress in March 2021, but has been stalled in the Senate for over a year. Ten Republican votes are needed to end the filibuster.

Kerr looked directly into the cameras before saying, “I ask you, Mitch McConnell. I ask all of you senators who refuse to do anything about the violence and school shootings and supermarket shootings. I ask you: Are you going to put your own desire for power ahead of the lives of our children and our elderly and our churchgoers? Because that’s what it looks like. It’s what we do every week.”

Kerr has been a longtime advocate for gun safety. His father was assassinated outside his office in Beirut in 1984 while he served as a university president.

Texas school shooting is among deadliest in U.S. history. Here are some of the others

“We’re going to play the game tonight,” Kerr continued. “But I want every person here, every person listening to this, to think about your own child or grandchild, mother or father, sister, brother. How would you feel if this happened to you today? We can’t get numb to this.”

Kerr said that by refusing to vote on tighter gun restrictions, some U.S. senators are keeping the American people “hostage.”

“It’s pathetic! I’ve had enough,” Kerr said, raising his voice, before storming out of the press conference.

Tuesday’s game between the Warriors and the Mavericks was preceded by a moment of silence.

Warriors guard Damion Lee also spoke about gun safety before the game, saying to reporters, “Obviously, everyone saw Steve’s pregame presser. Those are my exact same sentiments. It’s sad the world that we live in. We need to reform that.”

“Guns shouldn’t be as easily accessible. It’s easier to get a gun than baby formula right now. That’s unbelievable in this country that we live in.”

Mavericks head coach Jason Kidd spoke out about the Uvalde shooting in his pregame press conference, as well. “We will truly play with heavy hearts tonight for the community, for the school of Robb Elementary School.”

The NBA added that it is “devastated by the horrific shooting that took place today in Uvalde, Texas.”

The Mavericks won Tuesday’s game 119-109 but the Warriors are up three games to one in the series.

Celebrities outside of the world of sports are also weighing in on the Uvalde shooting. Actor Matthew McConaughey, who resides in Uvalde, posted a heartfelt statement on social media.

Hillcrest Memorial Funeral Home, which is located across the street from Robb Elementary School, said in a Facebook post on Tuesday evening that it would be assisting families of the shooting victims with no cost for funerals.

— With a file from The Associated Press

Alec Baldwin says it’s ‘strange’ to be back at work after...

Opinion: Expect markets to be on a wild ride until the...