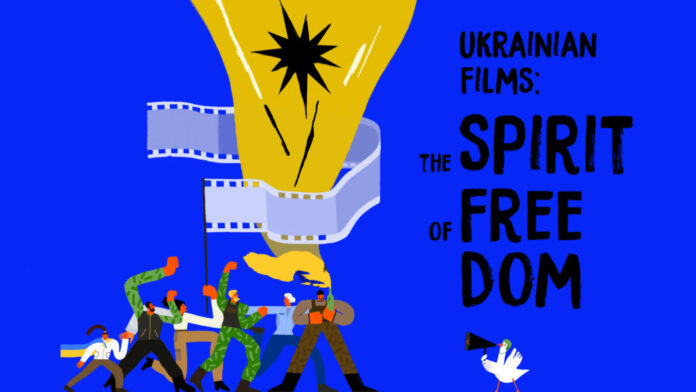 A fundraiser for Ukraine is underway this week with “The Spirit of Freedom” – a screening of five Ukrainian short films by the Show Me Shorts Film Festival trust in collaboration with the Kyiv International Short Film Festival.

“The Spirit of Freedom” is a screening of five Ukrainian short films by the Show Me Shorts Film Festival trust in collaboration with the Kyiv International Short Film Festival.
Photo: Supplied

All proceeds from the events are being donated to humanitarian agencies in Ukraine, and screenings have already taken place at sold-out venues in Auckland, Christchurch and Wellington, with one more scheduled for New Plymouth on Friday.

The funds raised from the screenings will be sent back to Kiev International Short Film Festival who will distribute it to humanitarian causes.

“My team is friendly with the team that runs the Kyiv International Short Film Festival in the Ukraine. We’ve been working and collaborating with them for the last decade, so obviously we were really worried about what was happening in there,” Show Me Shorts Festival Director Gina Dellabarca said.

“We were asking them what we could do for them to help support them through this time, and it was their idea to screen a collection of short films. They contacted a range of local Ukrainian short film makers and got them to donate their short films and put them in a collection, and now they’re making those films available for fundraising screenings in New Zealand and around the world.”

Events manager Harley Neville said “It sounded like a great idea to us because we want to support Ukraine, and it added a personal element because we actually know these people which is why we put it together as quickly as we could”.

“They touch on issues of war and displacement.”

The five Ukrainian short films being screened were all serious dramas that were recently produced. One was filmed in the now destroyed city of Mariupol, another two centred on those affected by Ukraine’s war with Russia in 2014.

“They were made in the last year or two by Ukrainian film makers and they touch on issues of war and the displacement of people, and they also visit interesting locations that are under attack at the moment such as Mariupol,” Dellabarca said.

“One is about a man who has returned from a war and he is depressed until he meets a friendly dog who helps him to find some connection and warmth again, and there’s another about a woman whose son is missing and she’s waiting anxiously to find out what’s happened to him. I think people are very interested in Ukraine at the moment so watching these movies is a good way a getting to know a little more about Ukrainian culture.

“We’ve been so worried about our friends in the Ukraine so we feel very good that we can turn our concern into action, so I think it’s nice that we can do something that shares Ukrainian culture as well as raise funds for people really need it at the moment.”