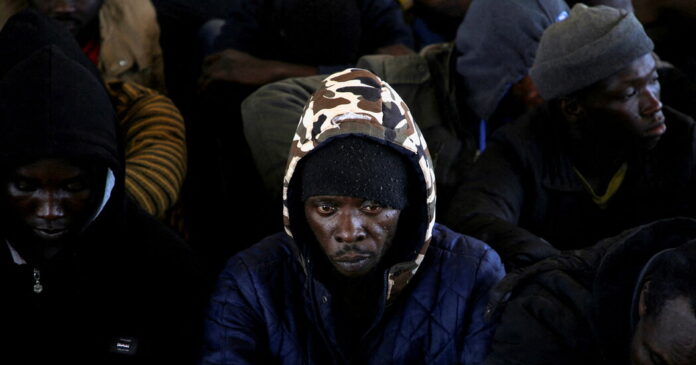 Seventy-six migrants were presumed dead after their boat, which departed from Libya, sank off the coast of Tunisia, the United Nations migration agency said on Wednesday.

“Unfortunately they are a lot,” said Flavio Di Giacomo, a spokesman for the agency, the International Organization for Migration. “But also unfortunately, this isn’t anything new.”

The boat carried about 100 people when it left the Libyan port city of Zuwara most likely bound for Italy, and only 24 of them were rescued, the Tunisian branch of the I.O.M. said on Twitter. The Tunisian Coast Guard, which rescued the shipwrecked people on Tuesday, only found one person dead in the water, Mr. Di Giacomo said, adding that the 75 other people who went missing were certainly also dead.

“In the sea people drown in few minutes,” he said.

The shipwreck brings the total number of deaths in the central Mediterranean Sea this year to over 650, according to the I.O.M., a figure similar to the one from the same period last year.

In a separate incident late Tuesday, a boat from the Spanish N.G.O. Open Arms, which operates search and rescue operations at sea, found another boat in trouble near Tunisian territorial waters, the N.G.O. said on Twitter. The organization said its personnel tried to distribute life vests to the passengers, who numbered more than 100, and called for help to Italy and Malta, but as they waited for a response, the overcrowded, wooden boat, that had already taken on water, capsized, and the migrants fell at sea.

The organization said it rescued the migrants from the water, but officials were not sure if some of them went missing.

“It was night, and we couldn’t know for sure if there were any corpses or not,” said Laura Lanuza, a spokeswoman for the N.G.O., adding that the migrants had departed from the Libyan port of Abu Kammash and were headed to Italy. “It was a really dramatic situation.”

“We need a safe port to disembark them,” Mr. Canals said in a Twitter video. “We need the authorities to act immediately and to provide a safe port.”

This year, 17,900 migrants arrived in Italy by boat, compared with 13,700 in the same period last year, according to the Interior Ministry. Despite efforts by the European Union to limit the number of African migrants and asylum seekers, thousands still undertake this dangerous journey, though the numbers are dwarfed by those of 2016. In that year, at the height of the migrant crisis, more than 180,000 people arrived in Italy by sea.

Mr. Di Giacomo, the I.O.M. spokesman, said that the relative increase this year does not justify alarms about a “worrisome increase in arrivals by sea.”

But he added that while Europe does not face an emergency in terms of numbers, “it is clear that there is a humanitarian emergency because people continue to die.”

The number of arrivals has been much higher for Ukrainian refugees, with more than 120,000 who have entered Italy since the start of the war, according to the Interior Ministry.

“This is not comparable to 18,000 who came in five months by the sea,” said Mr. Di Giacomo. “Now we can put everything into perspective.”

Who is Rishi Sunak?

Kremlin Deploys New Troops to Ukraine as Both Sides Gird for...