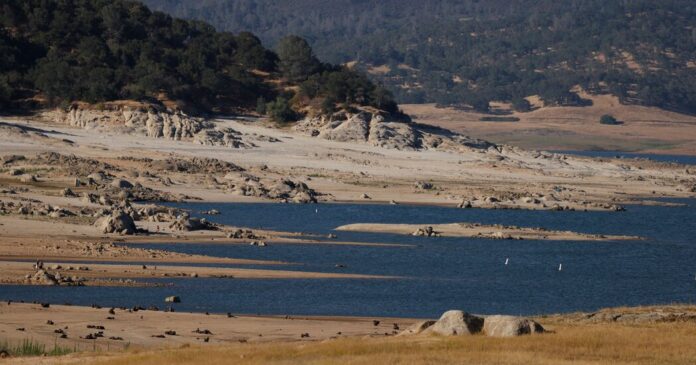 Ten months ago, Gov. Gavin Newsom called for Californians to voluntarily cut water consumption by 15 percent. But that goal remains far off — water use has come down less than 4 percent — and the state’s drought has only been getting worse.

So state officials on Tuesday adopted emergency regulations aimed at delivering the most drastic statewide cuts to address the drought thus far.

The rules require local water agencies to reduce water use by up to 20 percent and prohibit any watering of ornamental lawns at businesses and other commercial properties. Officials earlier this year announced penalties for watering yards after a rainstorm.

The latest measures are part of an effort to push water suppliers toward what’s “going to be needed in this new normal,” said Laurel Firestone, a California State Water Resources Control Board member.

“We are in this unprecedented drought. We need to act like it,” Firestone said at Tuesday’s board meeting.

California’s large reservoirs are depleted, and the snowpack has shrunk to 12 percent of what it usually is this time of year.

Newsom warned that without significant reductions this summer, the state could enact even more cuts. In the previous drought, Jerry Brown, the governor at the time, ordered a mandatory 25 percent across-the-board reduction in urban water use.

“California is facing a drought crisis and every local water agency and Californian needs to step up on conservation efforts,” Newsom said in a statement on Tuesday. “We all have to be more thoughtful about how to make every drop count.”

What exactly are the new regulations?

The rules ban anyone from irrigating ornamental lawns at commercial and industrial properties with potable water. That doesn’t include your house’s yard, parks or sports fields, but it does include decorative turf at businesses and in common areas of housing subdivisions.

Second, each local water supplier must, by June 10, adopt rules aimed at cutting water usage by 10 to 20 percent. I’ll explain how that could play out below.

What new rules will my local water agency implement?

Most local water suppliers have contingency plans for water shortages, devised to account for up to six levels of action depending on the severity of the shortage.

Water regulators are calling for suppliers to adopt Level 2 of the plan, which is intended for a shortage of 10 percent to 20 percent. Actions could include limiting landscape irrigation to two days a week, requiring covers for pools and allowing restaurants to serve water only upon request.

Exactly which restrictions will be implemented in your city depend on what your local supplier has laid out in its plan.

Whom do the rules affect?

Before the new regulations were adopted on Tuesday, about half of California’s population was under water restrictions implemented by local agencies, according to the governor’s office.

These include the Metropolitan Water District of Southern California’s recent sweeping limits on outdoor watering and the city of Healdsburg’s ban on irrigating yards. Also on Tuesday, officials in Santa Clara County announced fines of up to $10,000 for wasting water.

With the latest statewide mandates, every urban area throughout the state will be covered by a local plan for reducing water use. In other words, if you haven’t felt any cuts yet, you will soon.

“Every summer, we head north to spend a few days around Guerneville, located in Sonoma County. Escaping the noisy city, we immerse ourselves in the peace and tranquillity provided by the Russian River, among the redwoods. There are plenty of things to do, but the main attraction has to be the river.

Our first stop is always on the main street, River Road, where you’ll find an array of food and supplies. Pop into Stumptown Brewery to grab a drink with a front-row seat of the river.

Next, we head over to Johnson’s Beach, or the less crowded Monte Rio, where we’ll find the perfect spot to set up. The river continues for miles, and each bend reveals a different story. You’ll experience everything from families of ducks on their search for food, to kids on their first kayaking lesson, and groups of friends enjoying their time together. The draw of the river brings people of all walks of life on a hot, sweltering day.

I can’t think of anything else that represents summer more than the calm bliss that washes over you as you’re drifting down the Russian River.”

And before you go, some good news

Henderson Moore Blumer and Suzanne Zoe Joskow started off as classmates, with studios down the hallway from each other at the Otis College of Art and Design in Los Angeles.

They became sounding boards for each other as fellow artists. They gathered with friends at Tattle Tale, a dive bar near campus. On their own, they explored local architecture and drove around to estate sales.

Despite their increasing closeness, it came as a surprise when, after a reception following Blumer’s solo show at a gallery in Long Beach, they shared their first kiss.

“Both of us were smiling, but stunned because of the friendship,” she said. He was also still unsteady after his recent divorce.

So they kept things platonic. At least for the next few months.

Read the rest of their love story in The Times.

Thanks for reading. I’ll be back tomorrow. — Soumya

Briana Scalia and Mariel Wamsley contributed to California Today. You can reach the team at CAtoday@nytimes.com.

Sign up here to get this newsletter in your inbox.