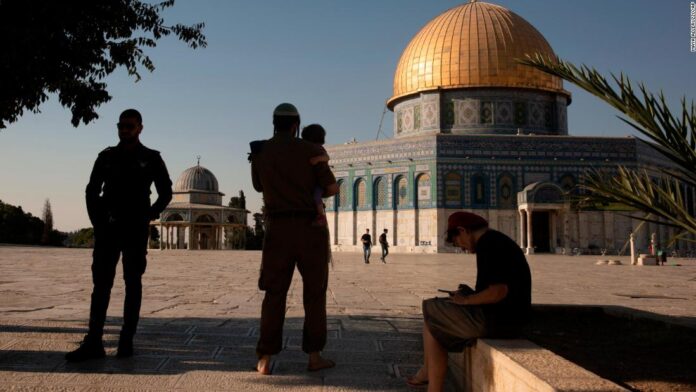 Israeli Magistrate’s Court Judge Zion Sahrai ruled Sunday that three Jewish youths were not violating security conditions when they recited a Jewish prayer at the contested holy area known to Jews as the Temple Mount and to Muslims as Haram Al-Sharif.

Police had charged all three with security violations for reciting the Shema, banning them from entering Jerusalem’s Old City for 15 days.

Under the so-called Status Quo agreement dating back to Ottoman rule of Jerusalem, only Muslims are allowed to pray inside the Al-Aqsa mosque compound.

Israel and other states agreed to maintain Status Quo access to these holy sites after Israel captured them in the 1967 war.

In his ruling, Judge Sahrai wrote: “In my opinion, it is not possible to say that bowing and reciting prayer — in the circumstances of the case before me — raises a reasonable suspicion of conduct that may lead to a breach of the peace.”

He also explicitly stated that the ruling should not be taken as a decision on the right to Jewish prayer in the area. “I cannot sign my decision without clarifying that it does not interfere with the work of the police in enforcing public order on the Temple Mount in general, nor does it constitute a determination concerning the freedom of worship on the Temple Mount. These matters have not been discussed in this decision.”

The Israeli Prime Minister’s Office said Sunday night: “There is no change, nor is any change planned, on the status quo of the Temple Mount.”

“The Magistrate Court’s decision is focused exclusively on the matter of conduct of the minors brought before it, and does not include a broader determination regarding the freedom of worship on the Temple Mount,” the prime minister’s office said.

Israel’s State Prosecutor is appealing the ruling, and Israeli police issued a statement reiterating that the court decision would not change access to the holy site: “The rules of visiting the place remain the same and the Israel Police will continue to enforce them as they are.”

Nonetheless, the Islamic-Christian Committee of Jerusalem and its Sanctuaries warned that the court decision was a violation of the existing agreement on holy sites: “The Israeli decision constitutes a revolution against the Status Quo in Al-Aqsa Mosque and creates a new situation that paves the way for the legalization of the Jewish presence in Al-Aqsa mosque.”

The Islamic trust charged with administering the compound also issued a condemnation of the ruling, stating that “all these decisions aimed at Judaizing the blessed Al-Aqsa Mosque are illegal, imposed by the force of the occupation.”

Some religious nationalist Jewish groups have been demanding access to the Temple Mount area for Jewish prayer. There have been several instances of Jewish visitors conducting prayers in the disputed area, sparking outrage from Muslim authorities and forced removals by Israeli police.

On Monday, far-right Knesset member Itamar Ben Gvir, tweeted a video of two Jewish men in prayer shawls attempting to access the Temple Mount but being turned away by police. In his post, Bengvir cited the court ruling: “This morning, I am very worried about the fate of democracy!!! To my amazement, the police do not respect the decision of the court, which in fact ruled that Jews are allowed to pray on the Temple Mount and that reciting prayers is not a crime. Police are sending a message of anarchy and, unfortunately, are telling youth not to take the judgement seriously. Terrible.”

Tensions are already high in Jerusalem. In what has become a controversial annual event, Jewish religious nationalist groups plan to march past some of the holiest sites in the Old City this week to mark Jerusalem Day, a national holiday in Israel. Hamas and other Palestinian militant groups have threatened to retaliate if the march goes ahead as planned.