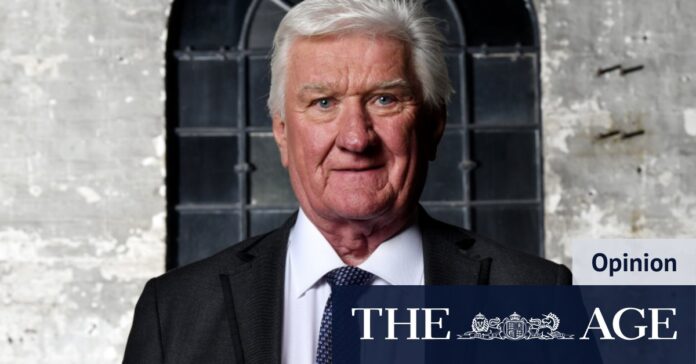 While Warren ponders his future, Wide World of Sports executives are scrambling through myriad scenarios about what their coverage will look like for this series.

If Warren does decide to call, will he be comfortable commentating first-up from a spell? Maybe he could call the first match, in Sydney, and that’s it? Could he call game two, in Perth, from Nine’s plush digs in North Sydney, which he’s done for three matches now without missing a beat?

If Warren doesn’t call, the duties will likely fall to Mat Thompson, who has been covering Sydney games in Warren’s absence.

Nine hasn’t imposed a deadline on Warren but a decision could come as early as Friday.

I was lucky enough to get a deep insight into “Rabbits” while ghost-writing his book The Voice (which flew off the shelves, such is his popularity) and his greatest fear, even 12 years ago, was making an error.

Like cricket without Richie Benaud, footy without Rabs will sound different. It’s sounded different this season.

But his booming calls have become synonymous with Origin — Oooh, crunch! Oh, look at Tallis! That’s not a try, that’s a miracle! — and while he has nothing to prove and he’s earned the right to do whatever he wants, it won’t be the same without him.

How good that Mick Potter is getting first crack at the Bulldogs job. One of rugby league’s truly great people, he deserves it.

In his final days at the Wests Tigers in 2014, as speculation swirled about his future, he was sending screenshots from Game of Thrones of decapitated heads on a stick, having a laugh at his looming demise.

When his contract wasn’t renewed, he said of coaching the Tigers: “It was a political hotbed. I knew the first day I went in there it was going to be a tough gig. I went in there to coach, not be a politician.”

They’re quickly running out of sticks to put heads on at Belmore after the events of this week.

Now that coach Trent Barrett has departed, all eyes are on general manager Phil Gould and whether he can turn things around.

People argue that drama follows Gould wherever he goes. It’s fair comment although understandable: you don’t kick a few heads without some collateral damage.

Gould will always be a dominant character wherever he goes, much like it is with Wayne Bennett and it was with the late Bob Fulton. They are giants of the game with big reputations and egos who divide opinion and always newsworthy.

At some point, they inevitably find themselves in a power struggle with chairmen and chief executives and someone is sacked or resigns.

I wrote in this space last year that the rebuild at Canterbury will take a decade, a sentiment shared by people within the club. After what’s transpired this year, it could take longer.

When Gould was brought in to save Penrith in 2010, with the club on the verge of insolvency, he wondered on more than one occasion that the problems were so endemic he would struggle to fix them.

The problems at the Bulldogs don’t seem to run as deep: it has a profitable leagues club behind them, and the salary-cap dramas can be turned around with the right recruitment.

It’s just going to take a long time, a lot of patience, a few mistakes along the way.

In Gus the Bulldogs faithful must trust. What choice do they have?

Symonds one of a kind

It doesn’t really soften the blow, but there’s been a flood of heart-warming stories about the late, great Andrew Symonds following his death in a car accident on Sunday.

Perhaps few befit him more than the yarn about him flying to a funeral where he was a pallbearer. When he touched down, he realised he’d forgotten his suit.

No worries: Symonds carried his mate’s coffin on his shoulder wearing shorts and thongs.

Royce ready to roll into town

They don’t make footballers like Royce Simmons any longer and we are worse for it.

The Penrith legend is in the middle of a 300km charity walk after being diagnosed recently with dementia.

Simmons started off from his home town of Gooloogong in the central west on Tuesday and will finish at BlueBet Stadium just before the match between the Panthers and Roosters at the SCG on Saturday night.

Before he does that, he’ll be given a guard of honour at the retirement village near the leagues club which is called, fittingly, The Royce.

Simmons was joined on the journey by Paralympic legend Kurt Fearnley, who is a cousin.

“We share a grandma,” Fearnley said. “I loved Royce because he was the guy who just slogged. He just worked hard. When you grow up in the bush, that resonates. You have to fight for every metre. That’s what I loved about the old bloke.”

You can donate at www.roycesbigwalk.com.au

“Has anyone’s childhood hero disappointed them as much?” — Australian legend Karrie Webb becomes the latest golfer to take a number and get in the queue to whack Greg Norman over his involvement in this Saudi-backed world golf league thing.

After being awarded the rights to the 2027 Rugby World Cup, and women’s tournament in 2029, Rugby Australia has been particularly mouthy, declaring last Friday a “National Day of Celebration” and then promising to raid the NRL’s ranks for talent with money it doesn’t have. About time rugby fired up. Rah-rah-rah-something.

NRL officials were crushed on Monday morning after a hugely successful Magic Round was stained by a group of gibbering men who started a fight with other fans, including former Manly player Owen Cunningham. If they find them, they should be banned for life. And publicly shamed. And put on an indefinite grog ban.

IT’S A BIG WEEKEND FOR …

Liverpool fans who will be pretty much impossible to be around if their side beats Wolverhampton and Aston Villa get a result against Manchester City on the final day of the season, delivering a second EPL title in three years and adding to last weekend’s FA Cup win on penalties against Chelsea.

IT’S AN EVEN BIGGER WEEKEND FOR …

Tiger Woods, who says he’s feeling stronger and fitter heading into the PGA Championship at Southern Hills Country Club in Oklahoma, which is the second major of the year and Woods’ second tournament since that horror car crash. Who needs a Lefty when you have a Tiger?

Shock quartet to do battle for Paris crown