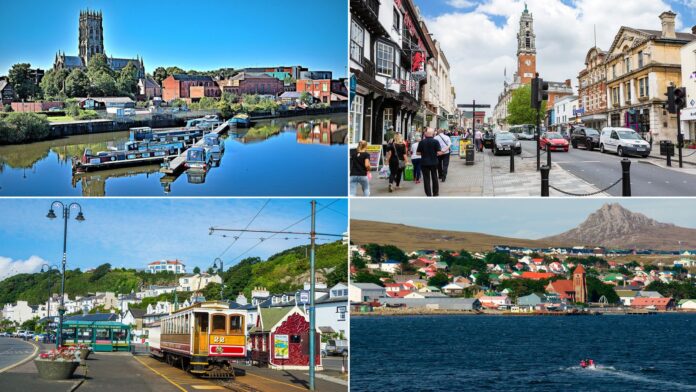 Eight new cities have been created as part of the celebrations for the Queen’s Platinum Jubilee taking place in two weeks.

The Cabinet Office announced the capital of the Falkland Islands is among the eight places to win coveted city status, alongside Bangor in Northern Ireland, Douglas on the Crown Dependency of the Isle of Man, Colchester, Doncaster, and Milton Keynes.

Dunfermline in Scotland and Wrexham in Wales have also won the honour.

These are some of the places that “make Britain great”, Steve Barclay, chancellor of the duchy of Lancaster said.

The new cities are expected to boost local communities and open new opportunities for people that live there, according to Mr Barclay.

He added: “What was clear to me during the process of assessing each application was the pride that people felt for their communities, local heritage and the Royal family.

“As we celebrate Her Majesty The Queen‘s colossal contribution to society, I am thrilled that we are able to recognise some of the many places that make Britain great.”

The award of city status to Stanley on the Falklands Islands is of particular significance for the Royal Family. Prince Andrew served as a helicopter pilot on HMS invincible during the Falklands war 40 years ago. More recently, the Duke of Cambridge was deployed there for a six-week tour as a search-and-rescue helicopter pilot in 2016.

Douglas is a cultural hub for The Royal Hall, home to the annual flagship concerts by the Isle of Man Symphony Orchestra. Her Majesty is also a patron of the Royal National Lifeboat Institution which operates from there.

Doncaster has showcased community spirit and resilience after the 2019 floods, Wrexham has become the home to the new National Football Museum of Wales while Dunfermline attracted 30,000 local people to their firework display and 10,000 to their Christmas light event.

Bangor became a key site for allied forces during the Second World War, Colchester is Britain’s first recorded settlement and its first capital, while Milton Keynes’ new town has 84,500 citizens who are volunteers. They claim to have the highest number of volunteers per head of population in the UK.

Whale put down after turning into stranded in River Thames in...