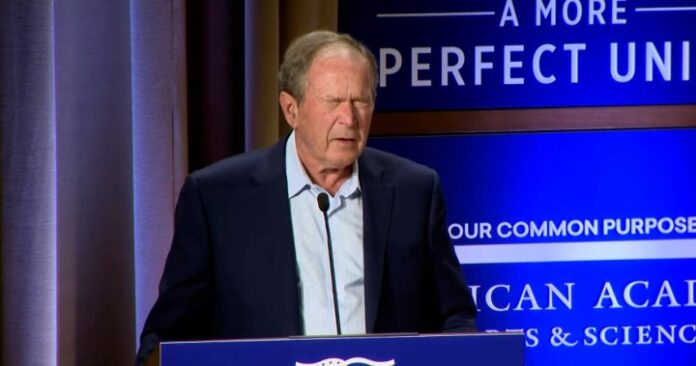 During a speech in Dallas on Wednesday, former U.S. president George W. Bush made what some are calling “history’s greatest Freudian slip.”

The gaffe happened as Bush took aim at Russia’s political system in a speech that addressed the importance of fair elections.

“Russian elections are rigged, political opponents are imprisoned or otherwise eliminated from participating in the electoral process,” he said.

“The result is an absence of checks and balances in Russia, and the decision of one man to launch a wholly unjustified and brutal invasion of Iraq. I mean… of Ukraine.”

As many will remember, Bush presided over the war in Iraq — in fact, he was the one who ordered the U.S.-led operation in 2003. The invasion resulted in the deaths of tens of thousands of Iraqi citizens, and the weapons of mass destruction that Bush claimed Iraq was hiding were never found.

As quick as the former president was to correct his words, he got a laugh from the crowd. The 75-year-old blamed the mistake on his age.

Of course, some Twitter users had a field day, taking great amusement in the mistake.

This is a Freudian slip for the ages…

George W. Bush didn’t do a Freudian slip.
He did a Freudian Confession. https://t.co/snIwFI0fA2

Others called out the laughter from the audience, and Bush, himself.

Everyone’s focused on the Freudian slip but what about everyone just laughing afterward???? https://t.co/eFLU7RzYth

George Bush just had a Freudian slip and admitted he launched a “wholly unjustified and brutal invasion of Iraq.”

Bush made the comments during an event at his presidential centre at Southern Methodist University.

In his speech, he applauded Ukrainian President Volodymyr Zelenskyy for his adherence to fair elections and for leading Ukraine during Russia’s invasion, comparing him to Winston Churchill and calling him a “cool little guy.”