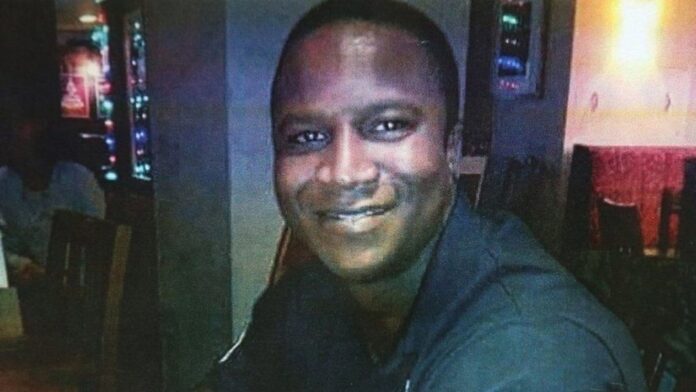 A police constable has told a public inquiry into the death of Sheku Bayoh in police custody that he appeared to be in a “rage or zombie state” when officers tried to detain him.

PC Craig Walker said Mr Bayoh walked towards him with a “thousand-yard stare” and had no reaction to the irritant spray PAVA.

Giving evidence in the second week of the inquiry, PC Walker said race had played no part in his risk assessment of the situation.

Mr Bayoh, 31, died after being restrained by police officers in Kirkcaldy on the morning of 3 May 2015. The officers were responding to reports of a black man carrying a knife and striking cars in the street.

PC Walker told how he and a colleague, PC Paton, had located Mr Bayoh but upon arrival, he ignored them.

He said: “We got out in front of him, asked him to stay where he was, let me see your hands, etc – but he was continuing to walk and not really engaging with the fact that we were there.”

He said that PC Paton deployed CS spray towards Mr Bayoh but the officer “ducked away” after the spray “blew back on him”.

At that point, PC Walker shouted: “Stay there, drop your weapon,” and he said it prompted Mr Bayoh to turn round and start walking towards him. The officer told the inquiry he deployed the irritant spray PAVA but it did not have the intended effect.

He said: “I got good contact with the eyes and face. It appeared to have no reaction at all, and then he just wiped the spray that was on his face and just sort of flicked it away.”

In a written statement to the inquiry, PC Walker said he formed the opinion that Mr Bayoh was “physically capable of causing serious injury to someone and was clearly in some sort of rage or zombie state”.

In oral evidence, he explained: “That would be when you get yourself so worked up, so angry, that you lose control of your surroundings. Somebody that’s got that angry, that irate, that he’s lost his senses.

“He wasn’t focusing on me, he was looking through me, it was quite an imposing, intense stare.”

PC Walker stated that race was not a factor in his risk assessment following calls by members of the public who had given descriptions of a man in the street carrying a knife and striking vehicles.

In a statement prepared ahead of the hearing and presented at the inquiry, he said: “The only factors considered when assessing the risk were the words big, muscular, and carrying a knife. Race did not play a part in my risk assessment.”

PC Walker told the inquiry that when he first encountered Mr Bayoh, he was not acting aggressively at that stage and the officer did not see a knife.

He was asked by Angela Grahame QC: “What would have stopped you, at that stage, from parking a little bit further away and observing matters for a few seconds, 10 seconds or a few minutes?”

The officer replied: “The risk to the public that had been passed. Although there’s nobody present at the time we arrive, there’s a row of houses on one side, there’s passing vehicles.

“Just because he wasn’t doing nothing there, I don’t think it would reflect too well on the police if we just parked up and watched him and somebody came out their house and he attacked that person, whilst we were parked up watching that happen.

“It makes much more sense to take advantage of the fact that he doesn’t appear to be in possession of the knife at that point, approach him, try and communicate with him and bring him into custody.”

PC Walker is due to continue giving evidence to the public inquiry, chaired by Lord Bracadale, on Friday.

It is looking into the circumstances leading to the death of Mr Bayoh, how the police dealt with the aftermath, the subsequent investigation and whether or not race was a factor.