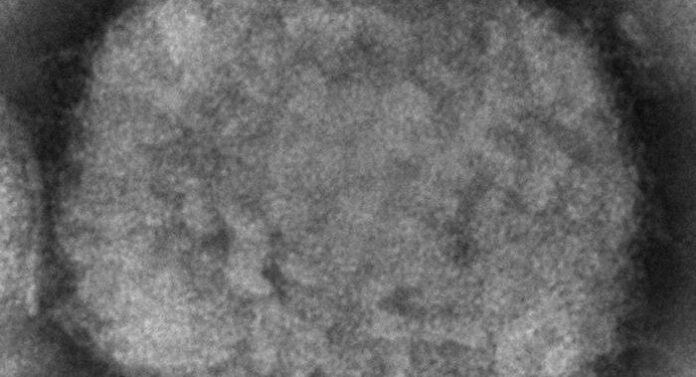 Recent cases of the monkeypox have researchers in Canada and elsewhere in the world trying to figure out just how widespread the virus is.

Monkeypox is rarely found outside of Africa, but potential cases in Europe and North America, including 17 in Montreal, have caught health officials’ attention.

How contagious can it be, and why is it called monkeypox in the first place? Here’s what we know so far.

Monkeypox is an orthopoxvirus that causes disease, typically transmitted to humans from animals, a spokesperson for the Public Health Agency of Canada (PHAC) told Global News.

Human-to-human transmission can occur through close contact with another person, through bodily fluids, lesions on skin like blisters, and/or respiratory droplets.

Symptoms of monkeypox include fever, headache, fatigue and muscle aches, according to the Centers for Disease Control and Prevention.

It added that after one to three days of fever, sufferers of monkeypox can develop a facial rash that then spreads to other parts of the body as lesions, which later fall off.

The incubation period for monkeypox is usually seven to 14 days, but can range as wide as five to 21 days. There is no cure for the virus, but most people recover from a monkeypox infection within a few weeks.

Why is it called monkeypox?

Monkeypox was first found in monkeys in 1958, hence the name, although rodents are now seen as the most common animal host.

“People get it in the countries where it’s endemic in Africa by contact typically with rodents,” said Angela Rasmussen, a virologist with the Vaccine and Infectious Disease Organization at the University of Saskatchewan.

“It’s not as transmissible human to human, so oftentimes when there is a new outbreak, it is associated with exposure to rodents.”

For example, Rasmussen cited a 2003 outbreak of monkeypox in the United States where 47 people in six states had confirmed or probable cases.

They caught the virus from pet prairie dogs that were housed near imported small mammals from Ghana.

However, with the monkeypox cases we’re seeing now, there doesn’t appear to be a connection with rodents, with multiple cases being reported in Europe and North America, Rasmussen said.

“That suggests that essentially these cases are the result of chains of transmission that were undetected. Presumably they resulted from travel, but many of these cases have no travel history,” she said.

“It’s going to be really important for the epidemiological investigations to try to understand what these different patients are to each other in terms of their connections, what kind of interactions they’ve had with each other, what their travel histories are so that we can get a better understanding of how this has spread.”

How prevalent is monkeypox?

In Africa, where the disease is most prevalent, close to one in 10 people die after contracting monkeypox.

The World Health Organization estimates there are thousands of monkeypox infections in about a dozen African countries every year. Most are in Congo, which reports about 6,000 cases annually, and Nigeria, with about 3,000 cases a year.

However, recent cases of monkeypox around the world have raised alarm, including in Canada.

“Most cases are mild, although there are obviously some more severe cases that have been identified, but in general, this will be more of a milder illness,” said Dr. Isaac Bogoch, an infectious disease specialist at Toronto General Hospital.

“It’s also fair to say that we don’t know too much about this. This is categorized as a neglected tropical infection in that it mostly impacts low-income countries, and there’s just, unfortunately, not a lot of research into infections like this.”

Monkeypox cases are now suspected in U.K., Spain, Portugal — here’s what you need to know

No confirmed cases of monkeypox have been reported to PHAC as of Thursday morning, the agency told Global News. However, 17 suspected cases of the virus are under investigation in Montreal.

The U.S. confirmed its first case on Wednesday in a man who recently travelled to Canada, the Massachusetts Department of Public Health said in a statement.

It’s the first time monkeypox appears to be spreading among people who didn’t travel to Africa. In Europe, infections have been reported in Britain, Italy, Portugal, Spain and Sweden.

“It seems like it involves mostly the men who have sex with men community,” said Dr. Sapha Barkati, a medical microbiologist and infectious diseases specialist at McGill University who is treating suspected monkeypox cases.

“Basically when you have a patient with this epidemiological link … that’s when it raises your suspicion.”

Toronto Public Health ‘not aware’ of any local cases of monkeypox

Barkati said patients haven’t needed to be hospitalized, but they do need to isolate.

“They need to be in isolation until all the lesions have healed, which means they all crusted and the scab has fallen off,” she said.

How is monkeypox spreading, and how contagious is it?

Health officials in Spain are investigating after eight men started showing symptoms of the viral infection. Those cases have yet to be officially confirmed, and a spokesperson for Madrid’s regional health department said the National Microbiology Centre is working to determine a final diagnosis.

The U.K. announced on Monday that they have detected four more cases of monkeypox, bringing the country’s total up to seven cases. The first case in the U.K. was detected on May 4.

In Portugal, five cases of monkeypox have been found, with 15 more people being tested. National authorities said everyone affected is in stable condition, and that all 20 cases were among men who live in Lisbon and the Tagus Valley.

The U.K. Health Security Agency said its cases are not all connected, indicating there may be multiple chains of transmission happening.

The U.K. Health Security Agency also highlighted that the recent cases were predominantly among men who self-identified as gay, bisexual or men who have sex with men, and advised those groups to be aware.

The infections in Portugal were picked up at a sexual health clinic, where the men sought help for lesions on their genitals.

“The community of men who have sex with men has been historically incredibly stigmatized with relation to virus infection, so I want to be very careful to say that that link has not been finalized yet,” Rasmussen said.

“Everybody should keep in mind how monkeypox can be transmitted, and that is through shared air, through aerosols, through direct or indirect contact, but through prolonged physical proximity with a person who is infected.”

Rasmussen added while there’s multiple ways monkeypox spreads among humans, it requires fairly extended contact with another person to get sick.

Do vaccines work against monkeypox?

Monkeypox puts virologists on alert because it is a member of the smallpox family, although it causes less serious illness.

Smallpox was eradicated by vaccination in 1980, and the shot has since been phased out.

But it also protects against monkeypox, and so the winding down of vaccination campaigns has led to a jump in monkeypox cases in areas where the disease is endemic, said Anne Rimoin, an epidemiology professor at UCLA in California.

Urgent investigations of the new cases are important as “they could suggest a novel means of spread or a change in the virus, but this is all to be determined,” she said.

Authorities in Great Britain however have begun offering smallpox vaccine to some health-care workers and others who may have been exposed to monkeypox, a U.K. Health Security Agency spokesperson said.

Vaccines that were used to eradicate smallpox are up to 85 per cent effective against monkeypox, according to the World Health Organization.

Some countries have large stockpiles of the smallpox vaccine as part of pandemic preparedness, including the United States.

Denmark-based drugmaker Bavarian Nordic said on Thursday that it secured a contract with an undisclosed European country to supply its smallpox vaccine in response to the monkeypox outbreak.

How can Canadians stay safe from monkeypox?

PHAC is closely monitoring the string of monkeypox cases being reported around the globe, a spokesperson said.

“PHAC is currently collaborating closely with international partners including the World Health Organization, the US Centers for Disease Control and Prevention, and the U.K. Health Security Agency,” they said.

“PHAC has alerted provincial and territorial public health authorities and laboratory partners across Canada to be alert for and investigate any potential cases. As the situation evolves we will continue to keep Canadians informed.”

In the COVID-19 era, Canadians could be triggered when they see outbreaks of other viruses in the world, but Rasmussen said monkeypox is “very rare” compared with the coronavirus.

“First and foremost, take as many precautions as possible to avoid getting the virus that’s all over the place right now, and that is SARS-CoV-2, which causes COVID,” she said, adding that protective measures like masking and proper ventilation implemented for COVID-19 can help limit monkeypox spread.

“I’m not willing to forecast that this isn’t going to be a bigger problem than it is now, because this is still a concerning situation, but I would be very surprised if we’re in for a monkeypox pandemic.”

Oxygen will get armed escort in India as provides run low...