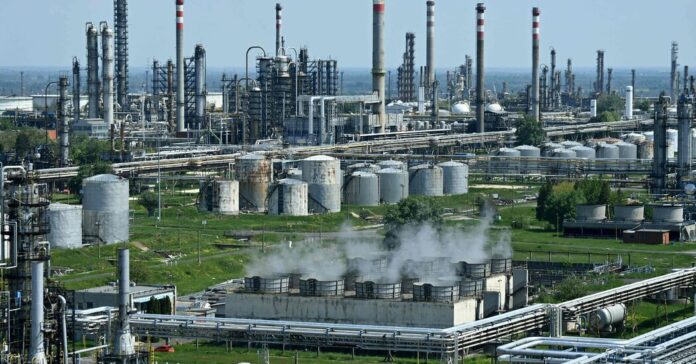 BUDAPEST — Prime Minister Viktor Orban of Hungary has fiercely resisted a proposed European embargo of Russian oil, saying it would devastate his country’s economy. Another potential casualty of such a ban would be something close to his heart: a financial gravy train for culture warriors in Europe and in the United States that has been fueled by Hungary’s profits from Russian crude.

Gorged with cash thanks to cheap supplies of Russian oil and gas, the Hungarian energy conglomerate MOL — one of the Central European nation’s biggest and most profitable companies — last month announced it would pay dividends of $652 million to its shareholders.

More than $65 million of that will go to a privately managed education foundation that last year hosted the Fox News host Tucker Carlson at a festival of right-wing pundits in Hungary. It has also provided stipends and fellowships to conservative Americans and Europeans looking for a safe haven from what they bemoan as the spread of “cancel culture” back home.

Some of them featured this week at the first Hungarian edition of the Conservative Political Action Conference, or CPAC, a gathering of the right wing of American politics. The event, attended by Mr. Orban, opened in Budapest on Thursday under the slogan “God, Homeland, Family.”

Hungary has for years served as a beacon for foreign conservatives who admire Mr. Orban’s hostility to immigrants, L.G.B.T.Q. rights, George Soros and liberals in general. Russia’s invasion of Ukraine, however, has put severe strain on that role, stirring anger among some conservatives about Mr. Orban’s cozying up to the Kremlin.

It has also threatened to strain Mr. Orban’s pact with voters, who gave his Fidesz party a landslide victory in elections last month on the promise that, thanks to cheap energy from Russia, gas and utility prices would not skyrocket as has happened elsewhere in Europe.

A steady supply of Russian energy has become such a central part of Mr. Orban’s economic and political model that ending it “is a red line for him,” said Andras Biro-Nagy, founder and director of Policy Solutions, a Budapest research group. “Russian oil and gas are absolutely vital to his whole scheme.”

This dependence has alarmed even some of his foreign fans who have taken up paid positions at Mathias Corvinus Collegium, known as M.C.C., the education foundation that benefits from the Hungarian energy company’s business with Russia. The foundation holds a 10 percent stake in MOL, which relies heavily on deliveries of Russian oil to feed its main refinery southwest of Budapest and another one it owns in Slovakia.

“I am very unhappy about the Hungarian position vis-à-vis Russia broadly speaking, and specifically about energy,” said Daniel Pipes, a conservative American scholar awarded a paid “senior fellowship” by the foundation. “At the same time, I am very positive about the Hungarian stance on immigration,” he said. “So I’m ambivalent. I dislike the Russia policy and I do like the immigration policy.”

Also unhappy is Poland, whose governing party, Law and Justice, shares Mr. Orban’s hostility to liberals but has been infuriated by his dogged resistance to efforts by the European Union to ban Russian oil, his refusal to let arms destined for Ukraine pass through Hungary and his failure to condemn Russia’s president, Vladimir V. Putin.

Worried that the Hungarian energy company is too beholden to Russia, the Polish Senate passed a resolution in March blocking a deal with Poland’s state-owned energy company that would have allowed MOL to acquire more than 400 Polish gas stations.

Bogdan Borusewicz, the opposition senator who initiated the move, said in an interview in Gdansk, the site of a big Polish refinery, that the war in Ukraine had made it dangerous to let a Hungarian company dependent on Russia into his country’s market.

“You could debate about this before the war,” he said, “but now it is impossible to have any illusions” about the loyalties of Mr. Orban, whom he described as “Putin’s most important ally in the E.U.” For the MOL conglomerate, he said, “cooperation with Russia is a crucial part of its business and even its survival.”

MOL declined interview requests but, in public statements, has stressed the difficulty and expense of shifting to non-Russian oil. Its Danube Refinery, south of Budapest, invested heavily over eight years to accommodate crude from other countries, which is generally more expensive, but it still depends on Russia for 65 percent of its needs.

Reporting a big jump in profits, the Hungarian company warned in its annual financial report this spring that it was exposed to Russia through a minority stake in a small Russian oil company, BaiTex, and by “the physical flow of crude oil through the transportation system in Russia and Ukraine.” That flow, it noted, had not “to date” been restricted.

Since then, the executive arm of the European Union has sought to cut it off entirely.

Doing that, said Tamas Pletser, an oil and gas analyst with Este Bank in Budapest, would be a severe blow. MOL, he said, has profited until now from a widening price difference between European Brent and the cheaper Russian crude.

“They make an additional $10 million per day on this current situation, which is based on the Russian supply and Russia’s invasion of Ukraine,” Mr. Pletser said.

Many millions of dollars have gone to the Mathias Corvinus Collegium and two other nominally independent foundations, which together hold 30.49 percent of the energy company and are its biggest shareholders. The shares used to be held by the state, but Mr. Orban two years ago gifted them, along with other valuable assets, to the foundations as part of what he said was an effort to overhaul education but which critics called legalized theft. The chairman of M.C.C. is Balazs Orban, who is also the prime minister’s political director (though not a relation).

Zoltan Szalai, the foundation’s general director, acknowledged in an interview, “This year, MOL has been very good to us.” The dividend money M.C.C. received this year from MOL is more than double its annual budget.

Mr. Szalai said his foundation should be able to cope with a decline in energy company profits if Mr. Orban loses his fight to keep Russian crude flowing. “We are thinking in the long term, and MOL is a very good and serious company,” Mr. Szalai said.

When it comes to banning Russian oil, “it is not true that Hungary does not have a choice,” said Piotr Wozniak, Poland’s energy minister in a previous Law and Justice government and longtime energy executive. “It will not be cheap or easy but it is not impossible.”

But, he added, “The question is whether Hungary wants to make this choice.”

In Mariupol. Hundreds more Ukrainian fighters that had been in a steel plant in Mariupol surrendered to Russia. Ukrainian officials have said the fighters will be exchanged for Russian prisoners of war, but they have provided no details about the agreement.

Shortly before the Ukraine invasion, Mr. Orban traveled to Moscow to meet Mr. Putin, securing assurances that Hungary could count on supplies of Russian natural gas.

Moscow last month abruptly cut off deliveries to Poland and Bulgaria but is still supplying Hungary. Any suspension, either by Russia or as a result of Western sanctions, would force Hungary to buy more expensive supplies on the market.

Giving the keynote address at CPAC on Thursday, Mr. Orban mentioned the war in Ukraine, calling Russia the “aggressor,” but mostly focused on advising conservatives how to succeed politically. “The first point,” he said, “is that we must play by our own rules.”

Mr. Carlson, the Fox News host who recently said that he was “rooting” for Russia in its war with Ukraine, sent a brief video message of support for the conference.

Most speakers avoided the issue of Ukraine, though one, Gavin Wax, a conservative commentator from New York, complained about tens of billions of dollars spent supporting Ukraine and “nonstop media propaganda pushing for World War III” with Russia.

The main organizer of the event is the Center for Fundamental Rights, a Hungarian outfit funded by the government that says it is fighting to repel the “relentless attack” on “Judeo-Christian culture, patriotism, sovereignty, the family, the created nature of man and woman and our commitment to life.”

The center initially said it was working on CPAC’s Budapest event with the Mathias Corvinus Collegium. The foundation, however, denied helping to organize CPAC, though it said it supported its aims.

Mr. Szalai, the M.C.C. general director, denied his foundation pushed any political agenda, saying in an interview that its mission was to promote “classic common sense.”

“To say we are far right is not fair,” he added.

Mr. Orban’s critics say that M.C.C. has established itself as what Mr. Biro-Nagy of Policy Solutions calls “one of the crown jewels of Orban’s mission to create a conservative, cultural hegemony.”

Among the foreign culture warriors listed by the Mathias Corvinus Collegium among the “guest instructors” this year was Rod Dreher, an American writer who has praised Hungary’s hard-line stance against Muslim immigrants.

Mr. Dreher said he was “not in the least bothered” that M.C.C. benefited from Russian oil. He said his own pay, however, came from another Hungarian government-funded entity.

“I deplore Russia’s invasion, and hope Ukraine prevails, but I don’t share this horror of Russia and ties to Russia that the ruling class in the U.S. and Western Europe do,” he said.

Prince Harry to Write a Memoir

Macron: ‘I really want to piss off’ the unvaccinated