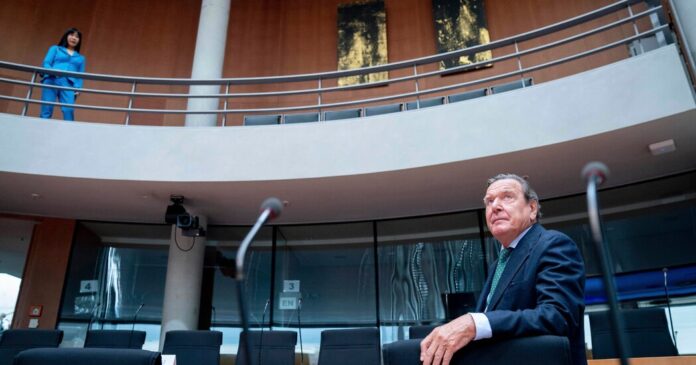 BERLIN — Germany’s former chancellor, Gerhard Schröder, a lobbyist for Russian energy companies and a personal friend to President Vladimir V. Putin of Russia, will lose his government-funded office because of his unwillingness to distance himself from Mr. Putin or to quit his posts, a German parliamentary budget committee decided on Thursday.

The committee, which meets in private, justified the move by noting Mr. Schröder “no longer fulfills any continuing obligation arising from his office.”

In addition to a generous pension, chancellors in Germany receive an office with a driver, a chief of staff and researchers.

All of Mr. Schröder’s government-paid staff, including his office manager and a former speechwriter who had been with him for 20 years, quit soon after Russia’s invasion because of his reluctance to distance himself from Russian interests. The decision on Thursday means no new staff will be hired. Neither Mr. Schröder’s security, which is handled by federal police, nor his pension will be affected.

The news comes nearly a month after The New York Times published an interview in which Mr. Schröder defended his ties to Russian energy companies and to Mr. Putin. It is the only interview Mr. Schröder has given since the invasion.

But even before that, his party — the Social Democrats currently in power under Chancellor Olaf Scholz — had been trying to eject him, a slow and bureaucratic process that could take months. Similarly, his hometown, Hanover, started proceedings to revoke his honorary citizenship until he gave it up voluntarily.

In early March Mr. Schröder flew to Moscow, where he met with Mr. Putin in an apparent effort to stop the war. Although the German government said it did not know of the trip beforehand, it welcomed his attempt at diplomacy. Nothing seems to have come of the meeting, however, and Andriy Melnyk, Ukraine’s ambassador to Berlin, later labeled the mission as “failed.”

Also on Thursday members of the E.U. Parliament voted to put Mr. Schröder — as well as other former European leaders still on Russian energy payroll — on future sanctions lists agreed to by the bloc. The nonbinding resolution passed with a clear majority by a show of hands.