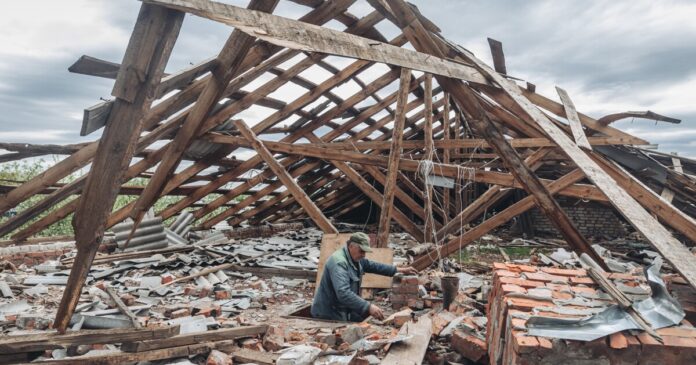 As fighting continued to rage in Ukraine on Saturday, with Kyiv making gains in a northeast offensive and Russia mounting a push amid fierce defenses in villages of the eastern Donbas region, senior Ukrainian officials predicted a “new, long-term phase” of fighting to last through much of the summer.

Now in its 80th day, the war hit new flashpoints with the opening of the first war crimes trial of a Russian soldier in Kyiv and a Russian accusation that Ukrainian shelling killed a civilian in a Russian village near the Ukrainian border.

“We are entering a new, long-term phase of the war,” Ukrainian defense minister Oleksii Reznikov posted on Facebook. While he welcomed a growing supply of Western arms flowing into his nation, he said he expected “extremely difficult weeks” ahead, adding, “How many there will be? No one can say for sure.”

In an interview on Sky News on Saturday, Ukrainian military intelligence leader Kyrylo Budanov said he expected battles to last through the summer and predicted, perhaps prematurely, a Ukrainian win.

“The breaking point will be in the second part of August. Most of the active combat actions will have finished by the end of this year,” he said.

Meanwhile, Western analysts and intelligence groups said Ukraine’s mounting response to Russian assaults were showing signs of success in Kharkiv, the northeastern city that had been under near-constant bombardment since February, and in the Donbas, the Ukrainian industrial heartland where Moscow has fomented unrest through its support of pro-Russia separatists.

In its daily intelligence update, the British Ministry of Defense said that Moscow’s attempts to hold a pro-Russia referendum in Kherson, a southeastern district that was the first to fall, “highlights the failure of Russia’s invasion to make progress towards its political objectives in Ukraine.”

“A central part of Russia’s original invasion plan was highly likely to use rigged referendums to place the majority of Ukraine’s regions under long-term pro-Russian authority,” the ministry said. “The fact that Russia has only succeeded in imposing a pro-Russian local leadership in Kherson highlights the failure of Russia’s invasion to make progress towards its political objectives in Ukraine.”

Russian state media on Saturday reported that a high-ranking Russian lawmaker, Anna Kuznetsova, recently visited Kherson, where she promised to “provide all kinds of assistance” to locals. It is unclear when Kuznetsova was in the region. The area has also seen anti-Russia protests in recent weeks.

In another analysis released on Friday, the Institute for the Study of War, a U.S.-based think tank, said Ukraine has “likely won the battle of Kharkiv.

“Ukrainian forces prevented Russian troops from encircling, let alone seizing Kharkiv, and then expelled them from around the city, as they did to Russian forces attempting to seize Kyiv” several weeks ago, the institute said.

Despite Ukrainian gains, the fighting has continued across the nation, including in the southern city of Mariupol, Ukrainian President Volodymyr Zelensky said in an overnight address. Hundreds of Ukrainian civilians have been evacuated from the bunkers and tunnels of a sprawling steel plant complex — Azovstal — that is Kyiv’s last holdout in the shattered southern port city on the Sea of Azov.

“We do not stop trying to save all our people from Mariupol and Azovstal. Currently, very difficult negotiations are underway on the next stage of the evacuation mission,” Zelensky said. The president said “a large” amount of individuals remained trapped in the complex, though he did not give a number.

Zelensky’s speech came amid new diplomatic responses in Europe to the war that Russia launched on Feb. 24.

On Saturday, the foreign minsters of Sweden and Finland were scheduled to meet with North Atlantic Treaty Organization representatives in Germany after leaders of both nations expressed strong interest in joining the defense alliance.

Finland said Thursday that it would apply for membership, a move that the U.S. and several NATO member states have welcomed.

On Saturday, the Finnish power company Fingrid said that Russia cut off electricity supplies to the nation. A representative for the company said that Finland “can cope” and that the power grid would not be interrupted.

Also Saturday, a statement released by the office of Finnish President Sauli Niinisto said he spoke with Russian President Vladimir Putin and told him that the invasion of Ukraine has fundamentally changed “the security environment of Finland” and that his country will seek NATO membership “in the next few days.”

Sweden is expected to follow with its own NATO announcement. At least one member state, Turkey, has expressed hesitation on the moves.

Speaking in Russian state media, Moscow’s Deputy Foreign Minister Alexander Grushko said Saturday that he saw no “real” reason for the Scandinavian nations to join the alliance. He said Russia would respond to their admission “by taking adequate precautionary measures.” Finland’s border with Russia is more than 800 miles long.

The United Nations this week estimated that more than 14 million people to have been displaced by the war in Ukraine. The number represents about a third of the nation’s population. The U.N. also reported more than 3,500 civilian deaths, though it said the real number is likely much higher.

Kaleem reported from London and McDonnell from Lviv, Ukraine.