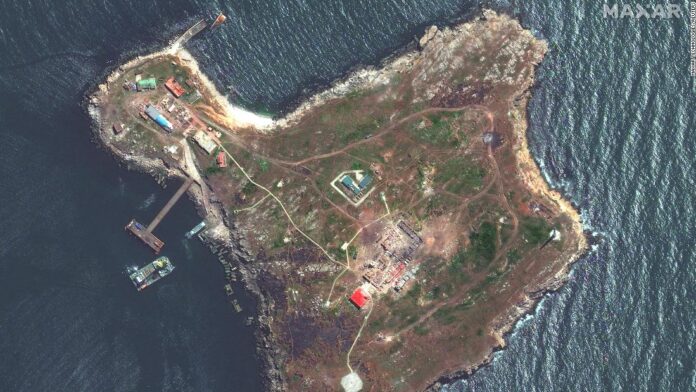 The isle — known as Zmiinyi Ostriv in Ukrainian — lies around 30 miles (48 kilometers) off the coast of Ukraine and close to the sea lanes leading to the Bosphorus and Mediterranean.

Moscow has never laid claim to Snake Island, and it’s a long way from any part of the Russian mainland. It’s over 180 miles from Crimea, annexed by Russia in 2014. In no geographical or historical sense could Russia claim it as their own.

But history be damned because it has strategic value and the Russians clearly thought it would be easy pickings. Even before the conflict, Ukraine knew that it was vulnerable. Last year, President Volodymyr Zelensky flew to Snake Island, where are there are no voters but some sheep, to emphasize that it mattered. “This island, like the rest of our territory, is Ukrainian land, and we will defend it with all our might,” he said.

The Russians went for Snake Island on the very first day of the war in late February, when a now famous exchange between its Ukrainian defenders and the Russian navy transpired. Ordered to surrender, the small detachment of sailors on the island radioed back, “Russian warship, go f**k yourself,” an exchange that became a motif of Ukrainian resistance.

But Snake Island has far more than a symbolic importance. Allow the Russians to establish facts-on-the-rocks there, and Ukraine would no longer be able to guarantee the freedom of sea lanes between the port of Odesa and the rest of the world. It’s through Odesa that much of Ukraine’s agricultural wealth travels to global markets.

Ukraine’s defense intelligence chief, Kyrylo Budanov, said Friday that whoever holds Snake Island controls “the surface and to some extent the air situation in southern Ukraine.”

“Whoever controls the island can block the movement of civilian vessels in all directions to the south of Ukraine at any time,” Budanov added.

For that reason alone, Ukraine has vowed that even if it can’t immediately retake the territory it will deny it to the Russians.

In a series of attacks in the last 10 days its drones and other assets have attacked Russian units trying to consolidate their presence on the island.

Satellite imagery from May 12 shows a landing ship submerged close to the island’s only quay and Ukraine says it struck two patrol boats nearby as well.

At the weekend other imagery showed two columns of smoke rising from the island. One is thought to have been from an Mi-8 helicopter that had been bringing in Russian marines. It was targeted by a missile according to drone video released by the Ukrainian military, which has also published footage of anti-aircraft installations on the island being attacked.

The Odesa Regional Military Administration claimed on Thursday that a Russian support ship, the ‘Vsevolod Bobrov’ was on fire and being towed to Sevastopol from the area of Snake Island. The claim remains unverified by CNN and Russia has denied any losses around the island.

So why are the Russians expending so much effort on holding Snake Island? Because it has the potential to be an unsinkable, if static, aircraft carrier, crammed with electronic warfare and anti-ship capabilities. On Thursday, the Ukrainian Ministry of Defense said the Russians were trying to “improve their position on the island in an effort to block Ukrainian maritime communications and capabilities in the northwestern Black Sea, particularly toward Odesa.”

Budanov also pointed out that Snake Island could also be useful to the Russians if they wished to reinforce their presence in the breakaway region of Transnistria in Moldova, which is run by a pro-Russian administration and where some 1,500 Russian troops are based.

Snake Island has actually been fought over before, but only in the courts. Romania and Ukraine had a long-running territorial dispute over the island and the surrounding seabed, which may contain hydrocarbon potential. The International Court of Justice finally determined the island’s status, and the borders of Ukraine’s and Romania’s exclusive economic zones in 2009.

This time around, it seems extremely unlikely that the fate of Snake Island will be decided in a court.

Dozens of Migrants Die After Boat Sinks Off Tunisian Coast

An Exhibition on Cancer Puts Hope for the Future on Display

Kissinger suggests that Ukraine give up territory to Russia, drawing a backlash.

How aid organizations are responding to the crisis in Ukraine —...

A Minnesota man is released after being held by Russian troops...