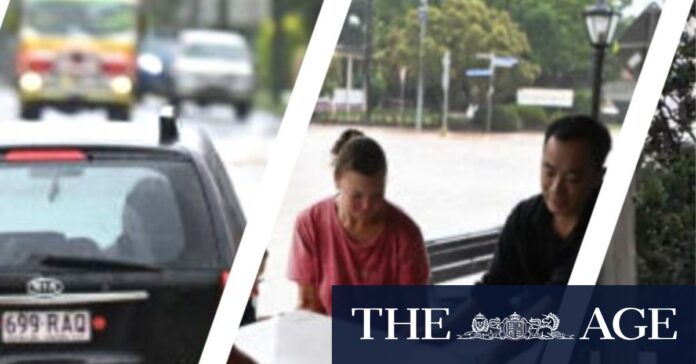 Across the Lockyer Valley, homes and businesses were flooded, with eight evacuation centres opened in the region.

In the Southern Downs region, the floodwaters have started to recede, revealing major damage to roads and buildings.

The Bureau of Meteorology warned that heavy rain was still likely to affect the northern end of the Sunshine Coast through to the top of the Wide Bay region on Saturday, however many areas have now been downgraded.

Rain was still forecast for wide parts of the state, and the weather bureau was also warning of the potential for sudden heavy showers in many areas, which could cause flash flooding in saturated catchments.

Hundreds of roads have been cut by floodwaters across the state, with authorities, as always, urging people to avoid travelling across flooded roads, and to avoid entering floodwaters at all costs.

“For most of the region, it’s still going to be that wet weather; it’s not going to be as intense as Friday, with those real heavy severe storms and that intense downpour,” meteorologist Brooke Pagel said.

“In Brisbane, we’re expecting up to 15 millimetres. It doesn’t sound like a lot but because it’s obviously so wet and there’s riverine flooding and flash flooding, it’s just going to add to everything that’s already happening.”

For integrity’s sake, Australia needs a change of government

Ros Benson went from Simply The Best to looking after the...

One dead as Sri Lanka police fire on demos