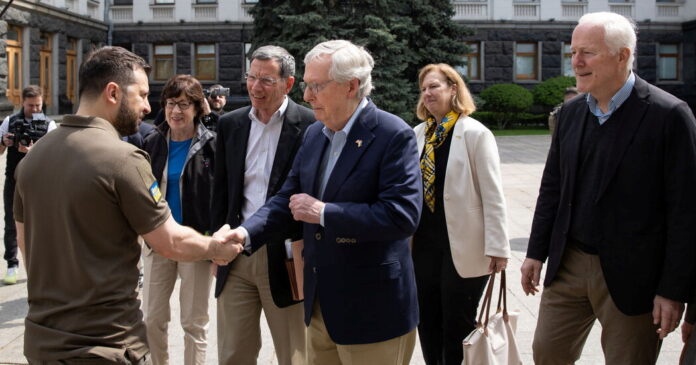 WASHINGTON — Senator Mitch McConnell of Kentucky, the minority leader, visited Ukraine on Saturday to meet with President Volodymyr Zelensky, leading the latest delegation of American lawmakers to the country as the United States deepens its commitment to Kyiv’s fight against the Russian invasion.

The surprise visit by Mr. McConnell, who was accompanied by three senior Republican senators, comes as the Senate is working to pass a $40 billion emergency military and humanitarian aid package for Ukraine. It follows a string of other clandestine visits, including by the first lady, Jill Biden, and Speaker Nancy Pelosi.

The trip, a rare international visit for Mr. McConnell, highlights the widespread bipartisan support for Ukraine in Washington as the country tries to fend off Russia’s invasion, even as questions remain about the Biden administration’s overall strategy toward the conflict and the scope of American assistance.

“Helping Ukraine is not an instance of mere philanthropy — it bears directly on America’s national security and vital interests that Russia’s naked aggression not succeed and carries significant costs,” Mr. McConnell said this week. “If Ukraine fails to repel Russian aggression, there is no question that the threat to American and European security will grow.”

The trip was disclosed by Mr. Zelensky’s office. Details were not yet available from the lawmakers.

On Thursday, the Senate failed to expedite passage of the $40 billion emergency package for Ukraine as one Republican senator, Rand Paul of Kentucky, refused to agree to waive procedural hurdles and approve the measure without being granted an opportunity to add a proposal establishing an inspector general to oversee how the money is spent. The measure is still expected to pass as soon as next week.

At the Logistics Games, Just Arriving Is a Victory