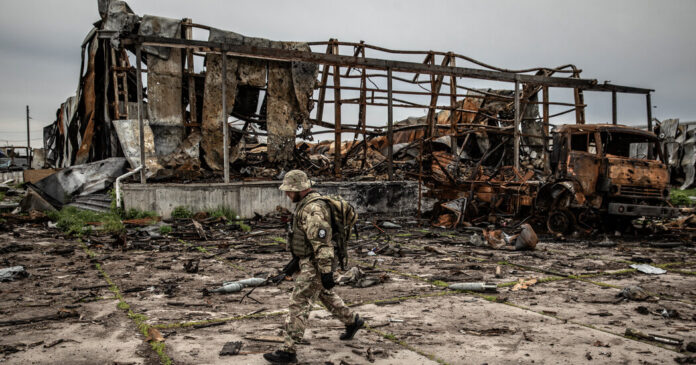 For years, President Vladimir V. Putin has viewed the expansion of NATO as an existential threat that would leave Russia hemmed in with Western missiles on its doorstep. Now, Moscow’s invasion of Ukraine seems to be bringing the Russian leader’s nightmare to life, with NATO on the brink of starting its largest potential expansion in nearly two decades.

After navigating the postwar era in nonalignment and neutrality, Sweden and Finland are now actively exploring ascension to the military alliance forged in the Cold War, with officials from both countries set to meet with their NATO counterparts on Saturday.

Russia lashed out immediately, halting exports of electricity to Finland and promising an unspecified “military-technical” response after warning that the move would pose a clear threat to its own national security.

Some analysts were concerned that Russia was laying the groundwork to threaten the deployment of nuclear weapons near the border with Finland. But officials in both Sweden and Finland played down that threat, noting that with the Russian enclave of Kaliningrad only 200 miles away, Moscow already has nuclear-capable missiles in easy range.

An acceptance of Sweden and Finland into NATO, a process that could take up to a year to finalize, would bring the Western military alliance right to Russia’s 810-mile-long border with Finland and would mark another profound shift to Europe’s strategic landscape brought on by Russia’s war in Ukraine. At the same time, the Pentagon is rotating new troops into Europe to bolster the alliance’s eastern flank, signaling that the temporary troop buildup is likely to become permanent.

As Western powers buckled down for what Ukraine’s defense minister called a “new, long phase” in the war, developments on the ground bore out the idea that Ukraine was still fighting Russia doggedly in the east and reporting that it was gaining ground.

In recent days, Ukrainian forces have begun consolidating control over the major city of Kharkiv after months of Russian attacks and heavy shelling. In a seeming replay of the Russian retreat from Kyiv, its battered battalions are withdrawing in order to protect critical supply lines to the east and to reinforce struggling units elsewhere in the Donbas in the country’s east, Ukrainian officials said.

The head of Kharkiv’s regional military administration said on Saturday that Ukrainian forces had started a counteroffensive against Russian forces around the northeastern city of Izium, which Russia captured last month and had hoped to use as a base for a drive south into other major cities.

In a flurry of U.S. diplomacy, Senator Mitch McConnell of Kentucky, the minority leader, made a surprise visit on Saturday to Ukraine to meet with President Volodymyr Zelensky. The accompanying delegation of American lawmakers was just the latest to travel to the country as the United States deepens its commitment to Kyiv’s fight against the Russian invasion.

The United States Secretary of State, Antony J. Blinken, was scheduled to travel to Germany on Saturday, to meet with NATO counterparts ahead of discussions with Sweden and Finland.

In a phone call on Saturday, President Sauli Niinisto of Finland said he told President Vladimir V. Putin of Russia that his country is seeking to join NATO because Moscow’s invasion of Ukraine had “fundamentally” altered Finland’s security environment.

Mr. Putin warned the Finnish leader it was a “mistake” to abandon Finland’s longstanding policy of military neutrality, the Kremlin said in a statement.

“By joining NATO, Finland strengthens its own security and assumes its responsibility,” the Finnish president said in a statement, adding that Finland wants “to take care of the practical questions arising from being a neighbor of Russia in a correct and professional manner.”

There was initial alarm as Turkey, a longtime NATO member, signaled this week that it might seek to block the Nordic countries’ joining the alliance. But on Saturday, a spokesman for President Recep Tayyip Erdogan of Turkey walked back any potential challenge, saying that Turkey was merely trying to ensure that all alliance members’ security concerns were heeded.

The potential growth of NATO added to a mounting list of setbacks for Mr. Putin. Russia’s military offensive in eastern Ukraine remains stalled, and The Institute for the Study of War, a Washington think tank, said in its latest assessment that the Ukrainians had now won the battle for Kharkiv.

Having failed in its initial campaign to take the Ukrainian capital and oust the government, the Kremlin can ill afford to accept another defeat in the east.

In an interview with Britain’s Sky News on Saturday, the country’s military intelligence chief, Major General Kyrylo Budanov, said the months ahead would be decisive.

“The breaking point will be in the second part of August,” he said. “Most of the active combat actions will have finished by the end of this year.”

But as Moscow’s forces around Kharkiv are driven back toward the Russian border, they are expected to fight hard to keep open critical supply routes running through the region. Russia also controls a wide swath of land across southeastern Ukraine, where it is increasingly fortifying its position. The military campaign, analysts say, will continue to devolve into a protracted slog characterized by heavy casualties on both sides and devastating long range bombardment.

Ukraine’s defense minister, Oleksii Reznikov, warned of “extremely tough weeks” ahead. “No one can say for sure how many of them there will be,” he said in a statement.

President Volodymyr Zelensky acknowledged that the fight to regain control of Russian-occupied territories would be long and hard, but he vowed that they would not be abandoned.

“The gradual liberation of the Kharkiv region proves that we will not leave anyone to the enemy,” he said.

Two countries inch closer to NATO. The foreign ministers from Sweden and Finland are poised to meet with their NATO counterparts to discuss the prospect of joining the alliance. In apparent retaliation, Russia halted exports of electricity to Finland after saying that a NATO expansion would pose a threat to its own national security.

A possible spoiler? A day after President Recep Tayyip Erdogan of Turkey suggested that he would be reluctant to welcome Finland and Sweden into NATO, a spokesman for the leader said the country was not trying to block the two nations’ potential membership in the alliance, but rather ensure that all members’ security concerns are considered.

On the ground. Russia’s military offensive in eastern Ukraine remains stalled, and the Ukrainians are on the offensive around the northeastern city of Kharkiv. Ukraine’s defense minister warned that the war had entered a “new, long phase” with “extremely tough weeks” ahead.

War crime case. The Ukrainian judicial authorities began a case against a Russian soldier accused of shooting a civilian. It is the first trial involving a suspected war crime by a Russian service member; the victim was a 62-year-old man on a bicycle in a village in Ukraine’s Sumy region.

The impact of the battlefield clashes continue to ripple around the world.

“Russia’s war of aggression has generated one of the most severe food and energy crises in recent history, which now threatens those most vulnerable across the globe,” the leaders of the world’s wealthiest democracies, the Group of 7, said on Saturday.

The war has interrupted wheat production in Ukraine and Russia, both major suppliers, while fighting and blockades in the Black Sea have disrupted transport of the grain. And poor harvests in China, along with a heat wave in India and drought in other countries, have further snarled global supply.

But India, the world’s second-largest wheat producer, says it is banning exports with some exceptions, a move that could compound a worldwide shortfall worsened by the war in Ukraine and deepen an already dire forecast for hunger across the globe.

India has about 10 percent of the world’s grain reserves, according to data from the United States Department of Agriculture, a large surplus resulting from its heavy subsidizing of its farmers. It has been seen for months as a country that could help make up for global supply shortages.

The wheat export ban, announced in a Commerce Ministry notice dated Friday, appeared to be an about-face from earlier statements from Prime Minister Narendra Modi, who had told President Biden in April that the country was ready to supply the world from its reserves. He had also urged domestic wheat producers to seize the opportunity, saying that Indian officials and financial institutions should support exporters.

The Commerce Ministry notice on Friday said that wheat exports were immediately banned, with some exceptions, because a sudden spike in the crop’s price had threatened India’s food security. The export ban is a further blow to international organizations working to counter the increasing threat of widespread hunger.