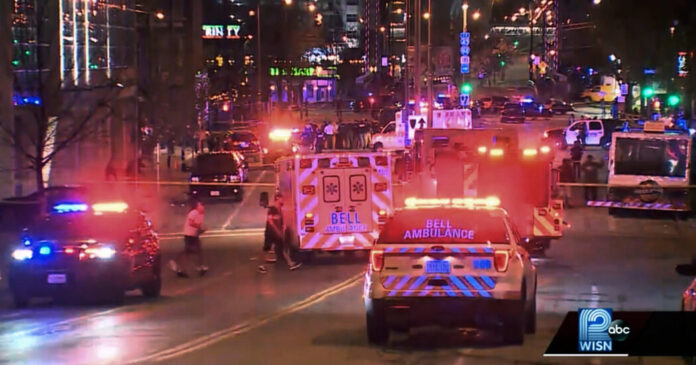 At least 17 people were wounded in a shooting in downtown Milwaukee on Friday night, blocks from the arena where an N.B.A. playoff game had ended hours earlier, the police said.

The Milwaukee Police Department said that there were no fatalities in the shooting, which happened around 11:09 p.m. in a popular nightlife area. The victims were between 15 and 47 years old and were all expected to survive, the police said.

Ten people were in custody in connection with the shooting, and the police said they recovered nine guns from the scene, which was near the arena, the Fiserv Forum. The police said the investigation was continuing and that they were still looking for others who might have been involved in the gunfire. What led up to the shooting was unknown.

At least 11,000 people had gathered outside the arena at a watch party in an area known as the Deer District to watch the Milwaukee Bucks play the Boston Celtics in Game 6 of the Eastern Conference semifinals.

The next game in the series is on Sunday in Boston. Another watch party that also has the capacity for 11,000 people is scheduled in the Deer District in Milwaukee.

A little less than two hours earlier on Friday, three people were wounded in a shooting in another nightlife area adjacent to the Deer District. The victims were two men, ages 26 and 29, and a 16-year-old female. They were all expected to survive, the police said. A 19-year-old man was in custody in connection with that shooting, the police said.

Bil Reinemann, 72, a parking attendant at a lot near the arena, was perched on a camper chair watching the score of the game on his phone when he heard what sounded like gunshots nearby.

“I definitely knew it was something beyond firecrackers,” Mr. Reinemann said.

People began “running in masses” down the street, past the parking lot, he said. Though he estimated the game still had about four minutes left, people had already started to leave the arena because the Bucks were losing.

Mr. Reinamann watched as a chaotic scene filled the street, with some fans running away from the shooting and others continuing toward it, likely unaware of what had happened, he said.

Mr. Reinemann said that he worried that the shooting might deter people from coming to the area around the arena to watch Sunday’s game and from frequenting the businesses and shops in the area in general.

“It doesn’t do anything positive for the imagery of the downtown area, particularly that neighborhood,” he said.

U.S. lawmakers say they are largely opposed to a no-fly zone...

‘So Much Hatred’: Jury Foreman Shaken by Evidence in Arbery Trial