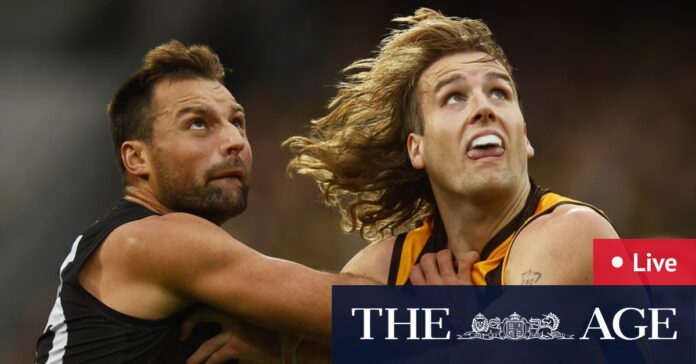 AFL 2022 round 9 LIVE updates: Lynch leads Tigers to lead over Hawks at MCG while Power on top of Kangaroos

The Tigers have struggled to kick goals in the last few minutes but Dustin Martin has come up with a goal from a seemingly impossible angle.

Martin grabbed the ball from a scrum on the ground close to the left point post and threw it onto his left boot and sliced a kick into the goals.

His teammates were in awe, so were the crowd.

Tom Lynch has kicked his fourth goal after pulling in a contested mark.

Richmond’s pressure defence is locking the ball in their front half of the ground and the Hawks have no answers for it so far.

If this continues, Lynch could have a bag of goals as the Tigers are repeatedly creating scoring chances.

Mitch Lewis has responded for the Hawks kicking his second goal after the restart.

Tom Lynch has snapped his third goal and extended Richmond’s lead at the start of this third term.

Lynch outsmarted his man Tom Sicily and ran from behind the goals to the front of the pack where he marked on the goal line and snapped the goal.

According to Fox Footy, Lynch has kicked 16 goals in the last three games including this one.

The Power are still well ahead of the Kangaroos at half time but faced a much tougher opposition that term.

Jeremy Finlayson’s late goal has pushed the lead back out to 31 points.

The Kangaroos have cut Port Adelaide’s lead to under five goals in the second term after a tidy goal from Tarryn Thomas who converted a set-shot from a tight angle.

The Power are still well in front leading by 26 points but the Kangaroos are looking better in the contests and contested areas.

This is a sensational contest at the MCG with the Tigers taking a one-goal lead into the second half after bolting back into the match in the second term behind plenty of pressure plays led by Shai Bolton.

The Hawks are in the wars with Jack Gunston out with an ankle injury and Jack Scrimshaw needing treatment on a shoulder/AC joint issue as the half-time siren sounded.

Scrimshaw looked in some discomfort although sometimes those kind of injuries can be painful for a few minutes and then come good.

The Tigers have looked great when pressuring the ball in their own forward line while the Hawks have shone when the chance has emerged for them to push forward and set up their forwards.

Tom Lynch has shown elite vision under pressure coming up with the ball in the forward pocket and seeing Ivan Soldo alone.

Lynch centrered the ball and Soldo kicked the goal from point-blank range.

Sam Frost dropped a stab-kick at the top of the goal-square and the ball fell to Shai Bolton who was onto the ball in a flash finding room to kick and then snapping a goal.

This is a great contest.

Port Adelaide are completely in control of proceedings against the Kangaroos in Hobart this afternoon taking a five-goal lead into quarter-time.

This was to be expected although the Kangaroos would have wanted to keep it close for a longer period of time than just the opening minutes.

Todd Marshall has kicked two goals for the Power, so has Mitch Georgiades while Nick Larkey has the sole goal for the Roos.

Hawks forward Mitch Lewis is back in the side today after a hamstring injury and has taken a mark on the lead and gone back to kick his first goal of the day.

Lewis was the Hawks’ most dangerous forward target in the opening weeks of the season until he went down injured, the Hawks need him now.

Dylan Moore is back on the ground for the Hawks after going to the rooms earlier this quarter.