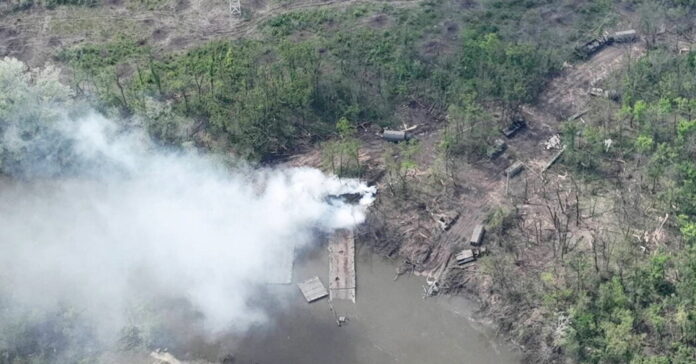 The British defense ministry on Friday said satellite imagery has confirmed that Ukrainian forces decimated a Russian battalion as it tried to cross a series of pontoon bridges over a river in northeast Ukraine earlier this week, a dramatic setback for Russian forces already struggling to make significant progress along the eastern front.

While it was not clear how many soldiers were killed trying to cross the Seversky Donets River, the numbers of burned-out and destroyed vehicles scattered along the riverside suggested that Russian forces suffered heavy losses.

The British assessment came after Ukraine’s military released drone images on Wednesday of what it said were the remains of a Russian battalion. The pictures showed at least two bridges submerged in the river west of Sievierodonetsk and dozens of destroyed Russian military vehicles scattered on both sides of the river bank and the surrounding area.

The 650-mile-long river originates in Russia and meanders southeast through the eastern Donbas region before re-entering Russian territory, forming oxbow lakes, floodplains and swamps. Its winding path cuts through the heart of the region where Russian forces are battling Ukrainian defenders — around the cities of Izium, Sloviansk, Kramatorsk and Sievierodonetsk — creating major obstacles to Moscow’s offensive in eastern Ukraine.

Russian troops are deployed across the front line in a crescent moon stretching from Izium in the north to Donetsk in the south and have been trying to encircle tens of thousands of Ukrainian soldiers.

So far, however, Russia has failed to make significant advances, and its troops have been repeatedly thwarted trying to cross the Seversky Donets, leading to heavy losses and slowing their already plodding advance, according to Ukrainian officials and Western military analysts.

“Conducting river crossings in a contested environment is a highly risky maneuver and speaks to the pressure the Russian commanders are under to make progress in their operations in eastern Ukraine,” the British Ministry of Defense said on Friday.

It said Russia had lost “significant armored maneuver elements of at least one Battalion Tactical Group,” while trying to cross the river. While the ministry said satellite imagery confirmed the loss of Russian equipment, it did not address Ukrainian claims that as many as 1,000 Russian soldiers were killed, which have been impossible to verify. Russian battalion groups generally have between 700 and 1,000 men.

Whatever the casualty count, Russia’s losses crossing the river underscored its army’s broader struggles to carry out its limited objective of taking more territory in eastern Ukraine after retreating from the capital, Kyiv, in the north.

More recently, Ukrainian forces also have driven Russian troops back from the area around the northern city of Kharkiv, making it possible for them to threaten Russian supply lines to Izium, which Russia is using as a staging area for its offensive.

The Institute for the Study of War, a Washington-based think tank, said there has been a “notable decline in the energy” in Russian’s advance from Izium, suggesting that Moscow may eventually abandon efforts for a wide encirclement of Ukrainian troops. Instead, the analysts said, Russia may seek to build on marginal gains and attempt “shallow” encirclements of Ukrainian troops in the cities of Sievierodonetsk and Lysychansk.

Man arrested after meals injected with needles at supermarkets