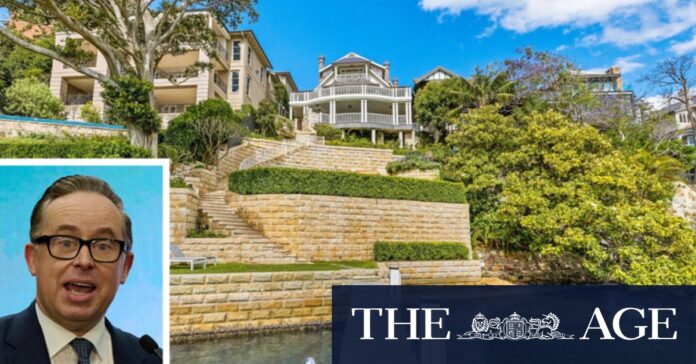 Mosman’s trophy-home owners are set to welcome Qantas boss Alan Joyce and his husband Shane Lloyd to the well-heeled neighbourhood after the couple bought a Federation mansion on Mosman Bay for $19 million.

The 15-room residence is an impressive step up the property ladder from their eyrie in the Harry Seidler-designed Cove Apartments building at The Rocks, which the couple bought in 2008 for $4.575 million.

Their new home is a 1908-built residence redesigned in 2015 by US architect Paul Moon into a three-level home with six bedrooms, formal and informal living areas, home cinema, wine cellar and a parterre garden that descends to a netted harbour pool, jetty and private berth.

As property watchers would know, the house was being shopped around late last year, but with no sale to show for it was relaunched more recently with a $19 million asking price with Ray White Lower North Shore’s David Gillan and Geoff Smith.

Settlement in recent days shows Joyce and Lloyd met the market, ending almost 30 years’ ownership by former foreign exchange dealer Alison Ethell and her sister Jane, who bought it in 1993 for $1.25 million.

Like so many Mosmanites, Joyce and Lloyd already have their Palm Beach getaway, having purchased their summer holiday home in 2015 for $5.25 million.

“Mr Sydney FC” Scott Barlow and his wife Alina have, by their own account, been looking to buy a new trophy home since selling their former Point Piper designer digs last year for $40 million to Macquarie Bank’s top earner Nick O’Kane.

Exercising at home is over. Can Apple’s virtual gym survive?

AFL 2022 round seven LIVE updates: Cats burst out of blocks...

Supermarket plans in the mix