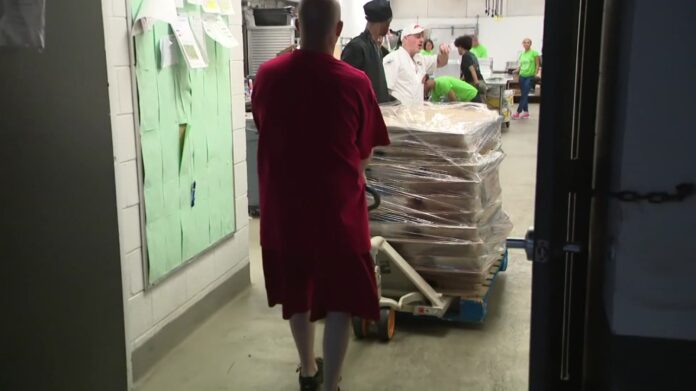 MIAMI (CBSMiami) – After the Superbowl in Miami, 45,000 pounds of extra, unused food was collected and distributed. This week, it took more than 100 volunteers to collect 90,000 pounds of leftover food from the Formula 1 Miami Grand Prix.

The fact that all this extra food didn’t go to a landfill not only helped the environment but non-profits in various locations.

CBS 4 followed the food to the Miami Rescue Mission where it ended on someone’s plate.

“There’s great food here. It’s very healthy,” Richard Segarra said. Segarra is one of the residents and he has compliments for all the chefs who help to prepare the food from scratch.

“I know Brian Pollock and I give shout outs to him what he’s done in the kitchen since he’s been there has been amazing,” Segarra said.

And a plate of food at the mission is sometimes much more than a meal, it’s bit of healing for the soul. “I was a troubled child out there,” Segarra explained.

Segarra has been taking part of an 18 month transitioning program and is about to finish on Saturday. He’ll join 40 other people at the Mission with a small ceremony for completion. So, as luck would have it, excess food from Formula 1 Grand Prix Miami came in at just the right time to help with a graduation dinner. In fact, it’s already been used in hundreds of meals.

“We had over 8 different trucks coming and going. 125 volunteers” Ellen Bowen, Food Rescue US South Florida Site Director said. The group helped to collect the 90,000 pounds of food and take it to the mission.

Part the surplus included fruit, vegetables, frozen meat and sweets, all of it untouched.

The windfall has been a big help to Chef Ivor Wilson who has noticed his purchasing power decrease with inflation.

In addition, the donation has saved money. “We usually do about $3,000 food purchasing a week but this week our purchase was down to $1,200,” Wilson told CBS 4.

Food Rescue is not sure if there will be as much surplus next year, but plans to save whatever they can. Meanwhile this year, some of the remaining donations will help sweeten the mission’s ceremony.

Girl embezzled practically $1 million after she ‘routinely overpaid herself,’ North...

Russia may have found a buyer for its cheap oil: India