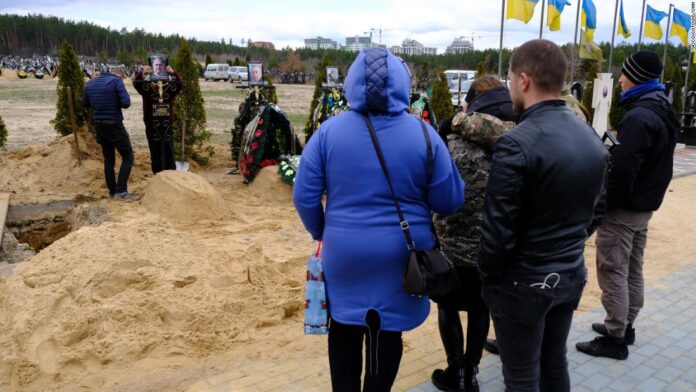 “Fire,” he shouts, before bracing and pressing the trigger. A fraction of a second later, an ear-ringing bang pierces through the otherwise silent countryside.

This is the sixth controlled explosion 34-year-old Opanasenko and his demining unit have carried out since Russia withdrew its forces from the Kyiv region earlier this month. Today, they blew up 16 unexploded artillery shells, each weighing around 45 kilograms (nearly 100 pounds), in one explosion. They have another 30 shells to go through before the day is over.

Their unit is one of many operating in the region. In total, they say they’ve destroyed 2.5 tons of ammunition in the past week and a half alone.

“If we are all alive, then everything is successful,” Opanasenko says.

As Russian forces retreated, they left behind scores of unexploded shells and bombs in addition to mines they planted to slow down the Ukrainian advance, to protect their withdrawal, or perhaps, simply to scorch the earth.

Mines, ammunition and rusty machine guns from destroyed armored vehicles can be dangerous for civilians now returning to their homes, so Opanasenko’s unit goes from village to village, scouring the ground for any of these deadly ordnances that need to be cleared out.

Signs warning of mines can be seen across towns and villages around Kyiv. Units like Opanasenko’s will continue their work for months to come across the country as the war rages on, according to Ukraine’s State Emergency Service (SES).

“As of now, we need to survey more than 300,000 hectares,” the head of the SES, Serhiy Kruk, told journalists last Wednesday.

“Therefore, in cooperation with the Armed Forces and the National Police of Ukraine, we are actively working and doing everything to return people and restore livelihoods,” he said, adding Kyiv will be a model for similar efforts in other regions.

At a different location near the capital, Opanasenko shows CNN another dangerous ordnance they’ve found in a backyard. It’s tube shaped, with a blunt red tip and six fin-like attachments at its end.

“It is one of the elements of a cluster bomb dropped from an airplane,” he says. “There are about 50 such elements in one bomb.”

His unit has found several of these explosives around the Ukrainian capital, he says.

Mine sweeping goes hand in hand with other clean-up efforts as residents from the Kyiv region begin to embrace their new reality and try and return to what is left of their shattered lives following Russia’s withdrawal.

Around 30,000 people have returned to the area, according to local authorities. Some businesses are reopening, and traffic is significantly increasing. Some military checkpoints have also been removed from the city’s arteries and some public transportation is resuming.

As they do, authorities are continuing to remove debris from the streets, including shells of destroyed tanks and other armored vehicles.

It’s a seemingly endless clean-up task for public officials, especially those who are tasked with collecting bodies caught in the cross fire.

At the main cemetery in Irpin, a Kyiv suburb, rows of graves for soldiers and civilians have been freshly dug.

Here, the military burials take place in quick succession. Russia may be regrouping, shifting its forces towards the East, but the war is not over — and there’s not a moment to spare.

Tetyana Bliznyuk is surrounded by her husband’s comrades as his body is laid to rest just before the sun sets, the last of the day’s burials for members of Ukraine’s Armed Forces.

When she last saw her husband, Oleksandr Lytkin, he promised her he’d be right back, Bliznyuk says.

“It’s so scary! No one thought this was possible in the 21st century,” she says, adding that the war “must be stopped.”

Her pain is shared by millions around Kyiv, as the death and destruction left by Russia’s invading forces becomes increasingly visible.