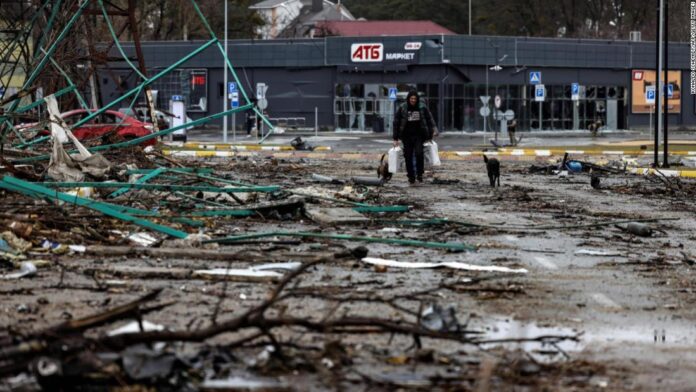 The hands of one man are tied behind his back with a piece of white cloth. Another man lies alone, tangled up in a bicycle by a grassy bank. A third man lies in the middle of the road, near the charred remains of a burned-out car.

The shocking images of the carnage in Bucha were captured by Agence France-Presse on Saturday, the same day Ukraine declared the town liberated from Russian troops. Accounts of alleged Russian atrocities are emerging as its forces retreat from areas near Kyiv following a failed bid to encircle the capital.

The town of Bucha has endured five weeks of near-constant firefights. Now officials and rights groups are blaming the civilian deaths on the departed Russian forces.

“Corpses of executed people still line the Yabluska street in Bucha. Their hands are tied behind their backs with white ‘civilian’ rags, they were shot in the back of their heads. So you can imagine what kind of lawlessness they perpetrated here,” Bucha mayor Anatoliy Fedoruk told Reuters on Saturday.

The alleged atrocities have drawn international outrage, with Western leaders calling for war crimes investigations and fresh sanctions on Russia.

“This is a special appeal aimed at drawing the world’s attention to those war crimes, crimes against humanity, which were committed by Russian troops in Bucha, Irpin and Hostomel,” Arestovych said. “These are liberated cities, a picture from horror movies, a post-apocalyptic picture.”

“Victims of these war crimes have already been found, including raped women who they tried to burn, local government officials killed, children killed, elderly people killed, men killed, many of them with tied hands, traces of torture and shot in the back of the head. Robberies, attempts to take gold, valuables, carpets, washing machines. It, of course, will be taken into account by the Prosecutor’s Office of Ukraine and law enforcement agencies and international criminal courts.”

CNN has not been able to independently confirm the details around the men’s deaths. CNN has requested comment from the Russian defense ministry regarding allegations of the execution of civilians in the Kyiv region and other parts of Ukraine.

The evidence of apparent atrocities in Bucha came as Human Rights Watch (HRW) announced it had documented allegations of war crimes in the occupied areas of the Kyiv, Chernihiv and Kharkiv regions.

The rights group said Sunday that the allegations include “a case of repeated rape; two cases of summary execution, one of six men, the other of one man; and other cases of unlawful violence and threats against civilians between February 27 and March 14, 2022.”

In Bucha, Russian forces “rounded up five men and summarily executed one of them” on March 4, HRW wrote. A witness told the rights group that soldiers forced the men to kneel on the road and pulled their shirts over their heads, before shooting one of the men in the back of the head.

HRW also alleges that on February 27, six men were rounded up in the village of Staryi Bykiv in the Chernihiv region and later executed.

In Malaya Rohan, a village in the Kharkiv region, a Russian soldier repeatedly raped a woman in a school where she was sheltering with her family on March 13, the victim told HRW. “She said that he beat her and cut her face, neck, and hair with a knife,” HRW wrote. The woman fled to Kharkiv the following day, “where she was able to get medical treatment and other services.”

And in the village of Vorzel, 31 miles northwest of Kyiv, Russian soldiers “threw a smoke grenade into a basement, then shot a woman and a 14-year-old child as they emerged from the basement, where they had been sheltering,” HRW said.

“The cases we documented amount to unspeakable, deliberate cruelty and violence against Ukrainian civilians,” Hugh Williamson, HRW’s Europe and Central Asia director said in the statement. “Rape, murder, and other violent acts against people in the Russian forces’ custody should be investigated as war crimes.”

CNN has not independently verified the details of the HRW report, and has requested comment from the Russian defense ministry.

The accounts and footage have hastened calls for war crimes investigations.

US Secretary of State Antony Blinken said Sunday that the State Department would help document any atrocities the Russian military committed against Ukrainian civilians.

“You can’t help but see these images as a punch to the gut,” Blinken told CNN’s Dana Bash on “State of the Union” Sunday.

“Since the aggression, we’ve come out and said that we believe that Russian forces have committed war crimes, and we’ve been working to document that, to provide the information we have to the relevant instructions and organizations that will put all of this together. And there needs to be accountability for it.”

UK Foreign Secretary Liz Truss said in a statement Sunday that “indiscriminate attacks against innocent civilians during Russia’s illegal and unjustified invasion of Ukraine must be investigated as war crimes.”

No New Incursion, but Putin Has Already Weakened Ukraine’s Economy