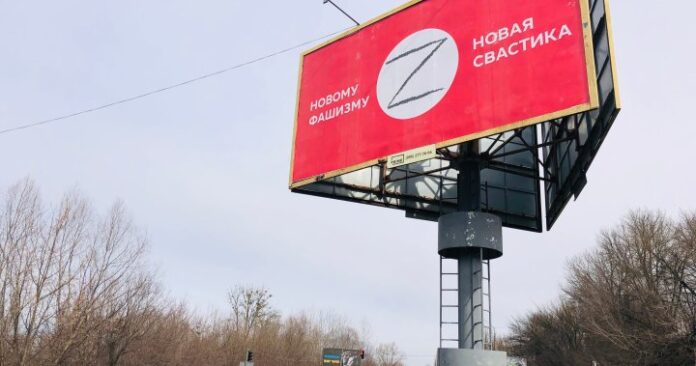 The signs of war are everywhere.

All along west Ukraine’s roads and highways, billboards have become a form of resistance.

With pointed slogans, they taunt Russian President Vladimir Putin and his invasion force, giving voice to an outraged country.

If Russian troops advance into the west, they will see posters almost the size of cinema screens reminding them they are unwanted.

One near Lutsk features the mysterious Z logo spotted on Russian military vehicles in Ukraine. Experts believe the letter is a way of marking Russian equipment so as to avoid friendly fire.

It may also be shorthand for a Russian term for victory, but the Ukrainians have a different take.

The Ukraine conflict is a contest between armies, but it is also a war of memes. Putin has branded his war an exercise to “demilitarize and denazify.”

But just as they have unexpectedly stalled Putin’s plans with firepower, Ukrainians have also fended him off with catchphrases.

“Russian soldiers f—k off,” reads one of the most common billboards.

Another shows the Kremlin as a ship sinking in blood.

“Russian military ship, go f—k yourself,” it says, quoting the response of Ukrainian border guards when told to surrender.

The 13 soldiers were stationed on Snake Island in the Black Sea when a Russian warship demanded they capitulate. Their answer, which surfaced in an audio recording, has been embraced by Ukrainians.

During the First World War, posters were used to recruit (Uncle Sam wants you), and they encouraged discretion during the Second World War (Loose lips sink ships).

Although messaging now plays out largely online, war-related road signs are flourishing in Ukraine as expressions of defiance and unity.

One of the more striking signs is near the garrison church in Lviv, where Ukrainians gather to bid farewell to their fallen soldiers.

It shows a Ukrainian woman looking down at Putin, holding a gun in his mouth.

The poster seizes on a remark Putin made after meeting French President Emmanuel Macron last month, when Russian troops were amassing on Ukraine’s border.

Commenting on President Volodymyr Zelenskyy, Putin recited what some call a Russian rape joke: “Like it or not, put up with it, my beauty,” he said.

It’s doubtful Putin knows these signs exist. The Russian troops may never see them. But they must serve a purpose or they would not be so omnipresent.

“Do not run away,” reads a sign coloured the yellow and blue of Ukraine’s flag.

Ultimatum ignored in Mariupol as attacks intensify in east Ukraine