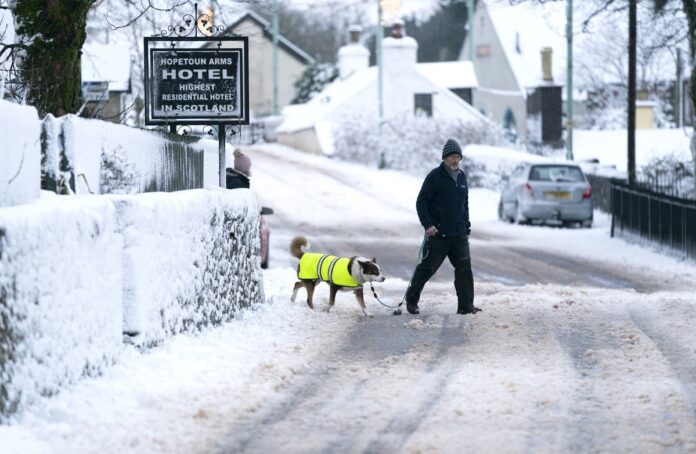 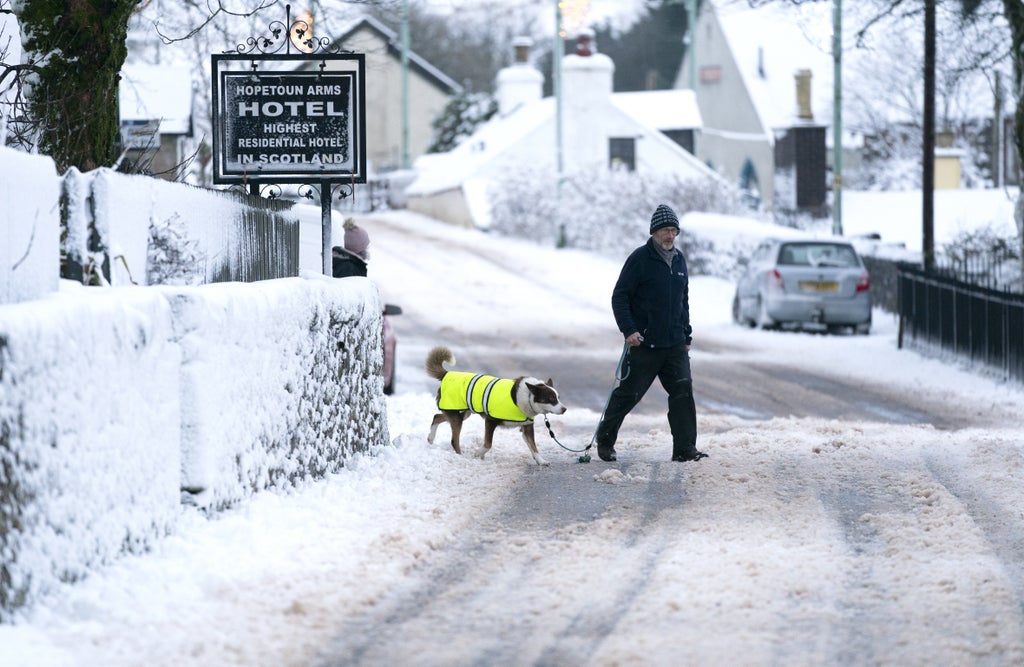 The Met Office has issued a yellow weather warning as up to four inches of snow are forecast to hit parts of the UK this week.

The yellow weather warning covers parts of Scotland on Wednesday and Thursday – with travellers being warned road and rail journeys could be affected.

The Met Office said: “Showers will fall as snow to quite low levels on Wednesday evening and night. Accumulations of 2-5 cm are possible above 200 metres elevation, with perhaps around 10 cm on some of the highest routes above 400 metres. At lower levels some slight slushy falls are possible, as well as a risk of icy surfaces, before the snow becomes more confined to high ground during Thursday morning.”

Snow is expected to fall between 4pm this afternoon and 11am tomorrow.

Yellow weather warnings for ice have also been issued across Northern Ireland on Wednesday and Thursday.

The Met Office said: “Wintry showers will continue this evening in many places before becoming more confined to western counties later in the night. This will bring a risk of icy patches, especially on untreated surfaces.”

The wintry showers come as temperatures in the region are set to plummet this week with a low of -3C in parts of Scotland.

Alongside snow warnings in parts of Scotland, is overlapping wind warnings in the region.

According to the Met Office a brief period of severe gale force winds will hit the Western Isles in the early hours of Thursday morning bringing gusts up to 75mph which will move eastward going further into Thursday morning and bringing wind speeds of 60mph.

The Met Office added: “Whilst such wind speeds are not unusual for the time of year, recently weakened trees and structures may mean a greater likelihood of localised damage or disruption.”

Met Office Meteorologist Clare Nasir said: “The air will turn steadily colder over the next few days, culminating in a severe frost on Thursday night and into Friday.

“Before that though, we hang on to some milder conditions just to the south of this weather front as it sinks down to southern England and Wales through the next 24 hours.

“Further north, an area of low pressure will bring with it gales, if not severe gales, through Thursday.

“And we are likely to see some snow accumulations on the high ground, particularly in Scotland but even on the hills of Northern Ireland and Pennine Districts over the next few days associated with any showery bursts of rain and snow.”

The forecast for the rest of the week states:

Rain clearing southern England, then southern and eastern parts bright. Rain and hill snow across Scotland will be replaced by wintry showers. Windy in the north, severe gales at first.

Outlook for Friday to Sunday

Friday fine and dry for many after a frosty start. Turning wet and windy across the northwest later, this then spreading to all parts over the weekend and turning milder.

‘Britcoin’ consultation to begin next year – but no launch before...