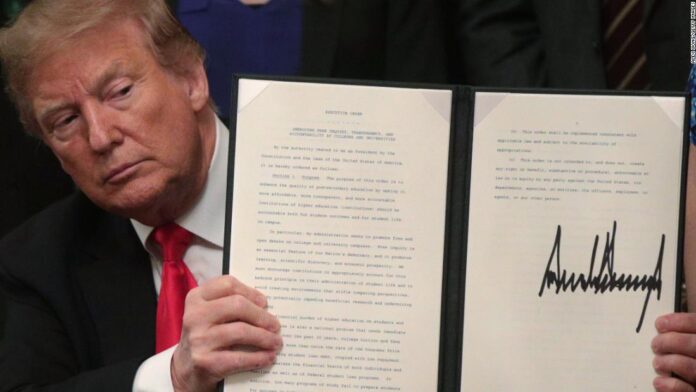 What follows him out of office are questions about whether he will face any consequences for his own mishandling of documents or, more importantly, for his effort to overturn the 2020 election he lost. More on that in a moment.

The growing irony of Trump’s “lock her up” chants. First, there’s the fact that he taunted Clinton and threatened to “lock her up” for deleting emails — when she served as secretary of state — that should have been preserved. This could have taught him not to destroy documents.

Then there’s the fact that Clinton lost some credibility among voters for appearing to hide her emails on a private server. This could have taught Trump to preserve everything.

Neither lesson was learned, according to two very interesting revelations about Trump’s mishandling of documents and possible violation of the law during and after his time as President.

Ripped-up documents. Trump, as President, routinely ripped up documents with his hands, ignoring the law about presidential records, only to have aides follow behind and tape them back together.

Trump has been at odds with the National Archives. It rejected his claim of executive privilege and, after a court battle, turned over documents to the House committee investigating the January 6 insurrection. The committee has received taped-together and torn-up documents from the National Archives.
What did Trump keep? Among the documents — which were previously in the White House residence, according to reports by CNN’s Gabby Orr and The Washington Post — are the letter former President Barack Obama left Trump at the White House in 2017 and letters to Trump from North Korean leader Kim Jong Un. Trump’s representatives are still searching for additional missing documents, according to the National Archives.

The document handover. No, the National Archives does not have a team of information agents. It was a “guy with a truck and work order” picking up the documents, a source told Orr, and the handover followed negotiations between the general counsel for the archives and Trump’s attorneys.

It’s not clear, at least not yet, if any documents taken to Mar-a-Lago were technically classified — although one can imagine his private correspondence with Kim, which Trump used to describe as “love letters,” would fall into that category.

Document shredding by hand. His reticence to give all his information to the National Archives is renewing interest in his tendency, throughout his presidency, to rip things up after looking at them.

Orr talked to three former White House officials who “said the former President sorted through file boxes in a rather methodical way — tearing up newspaper clippings or drafts of tweets that he had rejected and tossing them to the floor, or stacking papers he wished to hang on to in a disorderly stack atop his desk.”

Taking things from the National Archives is illegal. It has a curated list of prosecutions related to thefts of its documents. Most involve the sale of stolen items — from World Series to World War II memorabilia — on eBay. Thefts often lead to months or years behind bars.

But there is also the case of Sandy Berger, the national security adviser under President Bill Clinton, who went to the National Archives multiple times in 2003, folded documents related to the millennium terror plot, put them in his suit pocket and walked out of the building. He said he wanted to prepare himself to assist with the 9/11 commission.

Shredding evidence. In an echo of the actions undertaken by Trump, Berger cut up some documents with scissors. Read CNN’s 2005 report. Berger cut a deal with federal prosecutors for a fine and community service. He died in 2015.

“I think it’s a violation of the law. I don’t know it it’s ever been enforced on the President. I can understand in light of some of the things he said and done, why he wants to destroy the evidence,” the Illinois Democrat told CNN.

The Presidential Records Act was passed in the late 1970s, in the wake of the Watergate scandal, and has applied to every president since Ronald Reagan. It makes clear that presidential documents are public property, according to the National Archives.

A very big deal. It is already hard enough to separate fact from fantasy when it comes to Trump, who has conjured an alternate reality where the 2020 election was stolen from him.

This analysis is from CNN’s Chris Cillizza:

At every stage of his life, Trump has creatively edited the narrative to make himself look better. His many bankruptcies weren’t failures, they were savvy business moves. His party’s setbacks in the 2018 campaign were, actually, an upsetting of expectations and a victory. His botched handling of the coronavirus pandemic? He deserved more credit than he got. Riiiiight.

When you combine that series of Trump traits, you see a) how difficult it will be for the National Archives to ever get a complete picture of the Trump presidency and b) why it is so, so important that it does everything in its power to do so.

That term frustrated many Republicans who want the party to move on and focus on bread-and-butter issues before the midterm elections in November.

“This phrase is an odd way to describe the actions of a mob that chanted ‘Hang Mike Pence’ as it clashed with police before breaking through the doors and windows of the Capitol in an effort to stop the certification of the 2020 presidential election,” writes the Columbia University research scholar Nicole Hemmer for CNN.

A state case into election meddling. And that brings us to something Trump couldn’t tear up or hide from view: the recording of him pressuring Georgia election officials to change the 2020 results in their state. Fulton County District Attorney Fani Willis is looking into charges against people who meddled with election officials after the 2020 election.

The probe was launched last year, according to CNN’s Sara Murray and Devan Cole, following Trump’s call with Georgia Secretary of State Brad Raffensperger in which he pushed the Republican to “find” votes to overturn the election results.

“This is a criminal investigation. We’re not here playing a game,” Willis told CNN on Monday. “I plan to use the power of the law. We are all citizens.”

Analysis: The FBI just searched the home of a Texas Democratic...