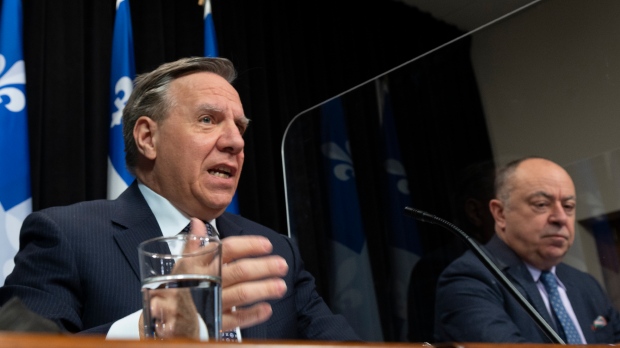 The Quebec government has announced a plan for getting out of the current lockdown and for how to “learn to live with COVID” over the longer term. It intends to lift nearly all public health restrictions by mid-March.

Premier François Legault said several measures will be lifted as early as Saturday, including those imposed on restaurants and private home gatherings.

Mask-wearing requirements and the vaccine passport, however, will remain in effect where they are already required because those are measures “that allow us to currently reopen,” Legault said during a news conference on Tuesday.

Hospitalizations have dropped from 3,400 to 2,400 in the past three weeks, he said, which was one of the key factors in moving ahead with a relaxing of the measures.

“We will need to learn to live with the virus. There may be a sixth wave eventually, but we will have to live with COVID,” Legault said.

MEASURES BEING LIFTED IN QUEBEC

When asked if the announcement on Tuesday had anything to do with the ongoing trucker convoys in Ottawa and Quebec City, the premier flatly denied the suggestion, saying the plan to reopen has been in the works with public health for the past few weeks.

The step to remove COVID-19 restrictions had the blessing of Quebec’s public health department, the premier said, as officials believe the province’s plan forward is based on a “calculated risk” in living with the virus.

“I just want to tell Quebecers that I understand that you’re fed up with these restrictions. But at the same time, I think it’s important that we remember why we have put in place these measures,” Legault said.

“Essentially, we have a health-care network that was fragile before the pandemic,” he said, adding that before, the “risk was too great” to open up too quickly.

“If we lifted too many measures, the hospitals would be overwhelmed and we wouldn’t be able to treat people. So that’s the dilemma that we had.”

Provinces are now grappling with their own paths forward as the Omicron wave of the pandemic continues to subside from a January peak.

Hours before Legault’s news conference, Saskatchewan Premier Scott Moe announced the proof of vaccination policy in that province will be eliminated at 12:01 a.m. on Feb. 14, but that masking will remain in effect until the end of February.

Quebec Health Minister Christian Dubé echoed the premier by justifying the masking and vaccine passport requirements, saying they were catalysts in the reopening plan. Those two measures, Dubé said, will stay in place “at least until mid-March.”

The City of Montreal will gradually reopen certain facilities as measures are lifted.

After almost two years of the pandemic, the opposition Parti Quebecois said its patience and collaboration with the Legault government had reached its limits.

There will be no more “carte blanche” for the CAQ, said PQ leader Paul Saint-Pierre Plamondon before the Legault news conference on Tuesday.

No new health measures will be accepted without a proper debate in the National Assembly, he said, and there is also no question of accepting the extension of health emergency decrees until the election campaign next fall.

Plamondon said citizens have consented to many restrictions because they were intended to be exceptional and temporary, but the government seems to want to extend them into permanent measures.

Premier Legault said his government is already working on tabling a bill in March “to create a framework for the need to have exceptional rules,” including the state of emergency.

Plamondon said in an interview with The Canadian Press that the lack of debate has ultimately damaged public confidence and fuelled opposition movements such as the trucker ‘freedom convoy’ that took place last weekend in Quebec City.

–With files from The Canadian Press