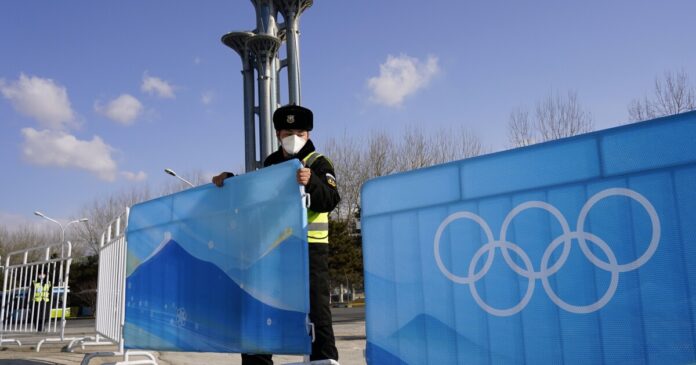 Three rows of fencing, two guard patrols and multiple “no crossing” signs mark the ominous border between the 2022 Winter Olympics and the rest of its host city. It feels like a parallel universe of ID-assigned bar codes, throat swabs and room service delivered by swift staff wearing goggles and full protective gear.

Like much else in a rigid China, little here is left to chance. It is a tightly scripted, surreal choreography: skiers, skaters, coaches — in carefully laid out paths — head for slopes and rinks, while outside the bubble life in Beijing hums aloofly along even as Olympic mascots pose in winter chill for photos along the fences. Much of the planet may be loosening coronavirus restrictions, but China, which can lock down a city in a nanosecond, is ever vigilant.

This is my first time back in Beijing after two years. But I am not really in this capital city. I can see it through fences and windows. But my old haunts, far from the established routes, are forbidden. I am a reporter in a “closed loop” of hotels, conference centers and sporting venues connected by dedicated buses and taxis, all part of China’s ambitious mission to adhere to its zero-COVID-19 policy while carrying out one of the world’s largest and most anticipated sporting events.

China has effectively built a microcosm of the COVID controls it put in place after the 2020 outbreak in Wuhan. The key is keeping people — in this case more than 50,000 athletes, media, coaches and workers — sequestered. Think “The Truman Show,” or a less sinister version of “Westworld,” where passion, drama, joy and failure play out in a highly stylized limbo designed never to collide with the real world.

Upon arrival, the rest of Beijing looked so much farther away than a glance through a window. Olympic banners and posters hung on street lamps and bus stops — otherwise there was little sign that legions of foreigners, some of whom were carrying the coronavirus, had descended upon the nation’s capital and its population of about 20 million.

Before entering the closed loop, Olympians and their entourages were expected to provide proof of vaccination, two negative coronavirus tests and a detailed log of body temperatures and possible symptoms for the two weeks prior. After landing, passengers were guided through customs, another virus swab and onto buses that arrived at designated, fenced-in hotels. The last negative test result granted you freedom beyond your hotel room.

From there, all residents are throat-swabbed daily. N95 or KN95 masks are required in all public spaces, and dining venues don’t allow takeout. Plastic partitions separate tables into single seating. A hotel front-desk worker suggested not even a hint of irony when explaining that any food delivery order from outside would have to go through full disinfection, rendering it inedible. So much for the Meituan or Ele.me apps ubiquitous within China.

This is how it is in the bubble. Some things make sense and others don’t — typical of the mishmash of pandemic restrictions we’ve all grown accustomed to. But in China there’s an air of trust and implacableness about them. A sense of engrained permanence.

The many restrictions — several steps further than what Tokyo enacted for its 2020 Summer Games — have so far paid off. As the sporting events have gotten underway, there’s been minimal disruption to operations, though 300-some participants including competing athletes have so far tested positive for the coronavirus. Both inside and outside the bubble, Beijing residents are blasé about infection risks, putting their faith in the Communist Party’s ability to quickly quash outbreaks.

During that time, China’s relations with the U.S. and other democratic countries have been strained. The Winter Olympics have become a point of political contention, after the U.S. and others announced a diplomatic boycott to protest China’s human rights abuses. China has warned participants against engaging in any political protest, and few signs of acrimony can be detected inside the bubble, though some athletes have complained of bleak conditions in isolation. Anti-riot gear has been propped up in our hotel lobby, perhaps as a precaution, or a warning. One never knows.

In his speech at the opening ceremony, International Olympic Committee President Thomas Bach called for unity and discouraged “erecting walls.” He was of course talking about political walls, not the endless maze-like physical barriers around every Olympics venue.

As someone who had been waiting for the opportunity to return to Beijing, the best of it has felt frustratingly out of reach.

From bus and taxi windows, I watch the streets and bikes and stores that were once my world pass by, all inaccessible except through memory. Outdoors, I try to suck in as much cold air as possible, as if that would give me more of a taste of the city. It would be an ill-advised move in normal times, given Beijing’s notorious pollution, which these days is not as thick as years ago. Looking out beyond the fences, though, the realization hit me: I am closer to friends and relatives than I have been in years, yet I have no way to see them.

Lining the walls of the media center are vivid portraits of some of China’s major attractions, the Great Wall, the Summer Palace. The effect was a low-level virtual tour of China’s landmarks and history, destinations the pandemic has prohibited for those of us in the bubble. It is as if the whole country is an unfolding map with no entry points.

The Chinese food offerings piqued my nostalgia but did little to satisfy any cravings for the outstanding authentic cuisines that I knew were theoretically just a phone tap and disinfection away. When I rushed to order a mala soup, whose name promised strong peppercorn flavor and spice, the woman taking the order leaned in to confide that it was not, in fact, spicy at all.

Elsewhere in the media cafeteria, sleek robotic arms dumped wontons into boiling water and built burgers layer by layer. Their technological prowess was diminished by the lackluster final products, and the fact that humans kept having to stick updated wait times on yellow post-it notes whenever the robots fell behind.

From the outside, the Winter Games, even as medals are being handed out, have seemed relatively opaque as well. The public’s access to sporting events has been limited by COVID controls, which also prevented organizers from releasing tickets to international spectators. Many of the fences that surround closed-loop buildings are patrolled by black-clad security guards and covered up with tarps and pictures of Olympic mascots.

“I know something is going on, but I don’t know where to enter and I don’t know which stadium is for what,” another Beijing resident said upon encountering the recently erected walls. “It’s like being a Muggle outside this Quidditch match.”

JetBlue cuts 1,280 flights through mid-January due to Omicron staff shortages...