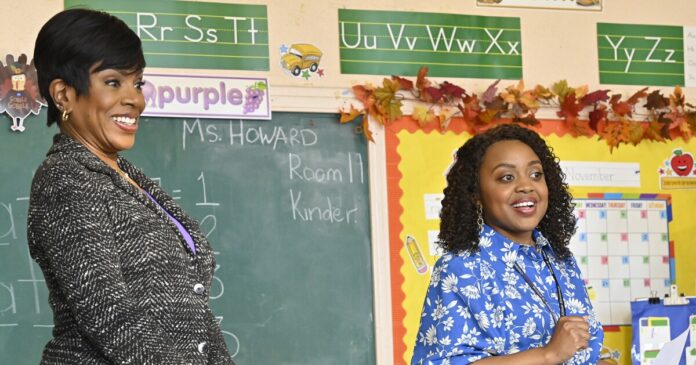 Don’t you just love those viral videos of teachers being awesome? Like the one of Kathleen Fitzpatrick — Ms. Fitz — swishing a long jumper, which led to her third-graders at Holy Trinity School in Washington, D.C., getting hot chocolate. This weekend I repeatedly watched a clip of a special education teacher helping a student enjoy recess by holding him in his arms as they hopped on a trampoline and jumped rope. The joyous smile on the child’s face epitomizes everything that’s good about us when we are good to each other.

I imagine that’s why “Abbott Elementary” is such a hit. The new mockumentary sitcom follows a group of passionate teachers in Philadelphia who do the best they can to help their underserved students despite a shortage of funding.

Quinta Brunson, the creator and star of the show, named the fictional school after her real-life sixth-grade teacher, Joyce Abbott. When Brunson was recently on “Jimmy Kimmel Live,” the host surprised her by bringing Abbott on the show via satellite, and the actress immediately started crying. That’s how important one teacher was to her. I’m sure many of us have a Joyce Abbott whom we invited into our hearts long ago and who has never left.

I wish the love we have for teachers were more evident in our society’s priorities. Right now our nation’s schools are short-staffed; our educators are broke, burned out or both; and the national dialogue about education is more focused on what not to teach.

Between 2006 and 2019, the number of education degrees dropped by 22%, while our population continued to grow.

Now COVID safety concerns are causing even more people to second-guess the profession, with the Bureau of Labor Statistics saying there are 567,000 fewer educators in our public schools today than before the pandemic. A recent poll commissioned by the National Education Assn. found 55% of educators looking to leave the profession earlier than planned.

Officials in Oregon, Michigan and elsewhere have been forced to lower the qualifications required for substitute teachers.

I know those viral videos are everywhere, but the profession is shrinking. We are in a crisis, one that has been decades in the making. Between 1985-86 and 2017-18, the average cost of attending college outpaced inflation by more than 2 to 1. The purchasing power of the average American hasn’t budged in 40 years. On average, teachers earn 11.1% less than other professionals with similar experience and education.

Toss in state budget cuts, leading more than 90% of teachers to buy school supplies with their own money, and you can see why teachers list burnout and salary as their top concerns.

Yet despite the financial burdens, disrespect from lawmakers, even the constant threat of dying in the classroom — last year the country set a record for school shootings — the Ms. Fitzes of the world continue fighting for other people’s children.

Right now in Oakland, there are teachers on a hunger strike in protest of the school district’s plan to close or merge 16 schools, which could displace hundreds of minority children. Teachers know well the added stress that not having a neighborhood school places on parents and what loosing childcare centers does to a community. Not to mention the racial disparity in school funding to begin with and this country’s habit of closing schools in predominantly Black and brown neighborhoods and transferring savings to schools in predominantly white ones.

“They’ve lost their humanity,” Moses Olanrewaju Omolade, one of the teachers on the hunger strike, told the Mercury News. “This is how we fight.”

But why do teachers still have to fight at all?

Thanks to COVID, millions of parents got a crash course in educating young people. We know it’s not easy. We know it takes a special person to want to stand in front of a classroom full of young minds and teach day after day, week after week, year after year.

We know how much that one special teacher meant to us — still means to us.

We know how much we love those viral videos of awesome teachers doing awesome things.

Our priorities must start to reflect this great knowing, or the noble profession of teaching is going to continue to hemorrhage good people.

In December, President Biden signed the National Defense Authorization Act, a $768-billion spending bill, which was $25 billion more than he originally requested from Congress for the military.

Also in December, we saw video of teachers in South Dakota on their hands and knees, stuffing $1 bills into their shirts and pockets, desperately trying to collect funds for class projects, as part of the entertainment during a break in a hockey game. As if the state being ranked 50th for average teacher salary wasn’t bad enough.

No wonder there’s a growing shortage.

It seems we love the viral videos of awesome teachers doing awesome things … but we just don’t have a lot of love for the people in them.

‘Why Don’t We Have Electricity?’: Outages Plague Puerto Rico