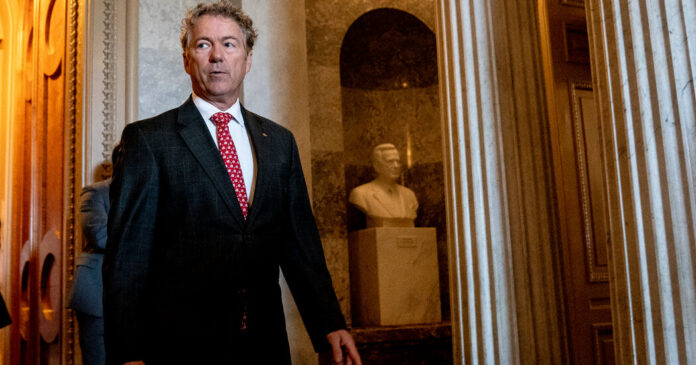 Days before the first phase of Washington’s vaccination entry requirement went into effect on Jan. 15, The Big Board, a family-owned bar in the popular H Street Corridor, tweeted that it would “always” be open to everyone.

The Big Board’s owners kept their promise, at a high cost. This week, the bar, a mile from the U.S. Capitol, was shut down after refusing to abide by Mayor Muriel Bowser’s order to check that patrons over the age of 12 had at least one dose of a Covid vaccine.

But the bar already seems to have another life, at least in conservative circles.

After a city health inspector posted a closure notice on The Big Board’s door on Tuesday saying that the bar “presents an imminent health hazard to the public,” Senator Rand Paul, Republican of Kentucky, dined at the bar with staffers, according to The Washington Examiner and The Daily Caller, two conservative news outlets. But since then, the bar has remained closed to the public.

Mr. Paul has introduced a bill before Congress to overturn Washington’s vaccination requirements. He also previously claimed that “masks don’t work,” despite the consensus among public health officials that they do limit the spread of the virus. A California study published by the Centers for Disease Control and Prevention this week also showed that consistent use of high-quality masks offers strong protection to wearers.

The Examiner and The Daily Caller reported that several other Republican members of the House joined Mr. Paul on Tuesday night, all of whom have also publicly criticized vaccine mandates, including Representatives Thomas Massie, Republican of Kentucky, and Ronny Jackson, Republican of Texas. Grinning and maskless, some of the lawmakers posed for pictures with a co-owner of the bar, Eric Flannery.

In a YouTube video made that evening, Mr. Flannery, with some of the congressional representatives standing next to him, vowed to “keep on fighting” and said the mayor’s order needed to be challenged in D.C. Superior Court.

And Representative Tim Burchett invited Mr. Flannery to relocate. “If you want to come to Tennessee, we’re a freedom-loving state, and we’d love to have you, brother,” he said.

The video was uploaded by the Daily Signal, a conservative site, and later shared by The Big Board on its Facebook page.

On Thursday, Glenn Beck, the unvaccinated conservative radio host who has previously been criticized for spreading misinformation about Covid vaccines, also interviewed Mr. Flannery and promoted the bar, directing listeners to a fund-raising campaign on GiveSendGo, a self-described Christian crowdfunding site. Another conservative talk radio show, The Clay Travis and Buck Sexton Show, which took over the time slot previously filled by right-wing talk radio star Rush Limbaugh, interviewed Mr. Flannery on Thursday and linked to the crowdfunding site. By Saturday afternoon, that site had logged more than $16,500 in donations.

The state of the virus in the U.S. The coronavirus has now claimed more than 900,000 lives across the country, and the Covid death rates remain alarmingly high. The number of new infections, however, has fallen by more than half since mid-January, and hospitalizations are also declining.

Boosters. New data from the Centers for Disease Control and Prevention confirmed that booster doses are most beneficial to older adults. For younger Americans, vaccination decreased the risk of hospitalization and death so sharply that the additional shot did not seem to add much benefit.

Around the world. Several countries are easing their pandemic protocols, though public health leaders at the World Health Organization continued to urge caution about relaxing restrictions. In Austria, a sweeping Covid vaccine mandate is set to become law.

And an earlier GoFundMe campaign for The Big Board’s owners set up by a correspondent with the Daily Caller on Jan. 19 and tweeted by Mr. Paul had logged more than $32,700 in donations by Saturday afternoon.

Mr. Flannery and The Big Board did not immediately respond to a request for comment.

In December, when Mayor Bowser announced that the vaccination entry requirement would be put into place, Washington was experiencing surging rates of positive Covid tests as the Omicron variant became dominant.

Covid deaths in the district have risen only slightly in the aftermath, likely because more than 92 percent of the population has had at least one dose of the vaccine.