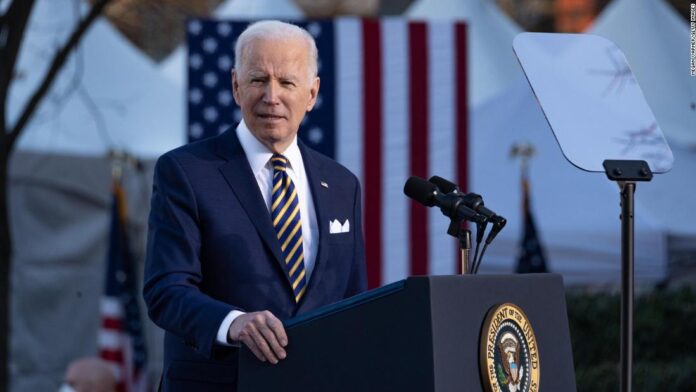 But Biden was finally on the receiving end of some much-needed good news on several fronts this week. Consider:

2) Covid-19 cases nationally are down 38% from last week, according to Johns Hopkins University, while hospitalizations are down 16%. (Deaths were 7% higher, but there are signs that number is plateauing.)
3) A successful US counterterrorism raid in Syria that was months in the making resulted in the death of a top ISIS leader.
4) And on top of all that, Biden kick-started the process of filling the upcoming vacancy on the Supreme Court.
Plus, the week was marked by infighting for the President’s opposition, with the Republican National Committee voting to censure two of the party’s most outspoken critics of former President Donald Trump: Reps. Liz Cheney and Adam Kinzinger. The RNC also received swift blowback for referring to the events of January 6, 2021, as “legitimate political discourse.”

Of course, it’s far from a guarantee any of these moments will lead to a boost in the President’s political standing in a meaningful or long-lasting way. And plenty of potential pitfalls await the administration.

Covid and its effects on the economy have proved unpredictable time and again. Inflation remains a major concern for Americans. The Supreme Court confirmation process could turn ugly. Tensions between Russia and Ukraine continue to rise. And Biden’s Build Back Better package is still “dead,” as Sen. Joe Manchin recently reaffirmed.

But this week’s developments could provide Biden, stuck in the low 40s in the polls, an opportunity to begin shoring up some of his vulnerabilities nine months out from the midterm elections.

Democrats have long said that first and foremost, the pandemic and the economy would need to be heading in the right direction for them to have any shot at holding the House and Senate this November. As CNN’s Stephen Collinson wrote, the Syria raid gives Biden a possible counterargument to Republicans who have painted him as weak on foreign policy.
And the Supreme Court vacancy allows Biden a chance to rally disillusioned members of his base and fulfill a campaign promise to nominate a Black woman.

The Point: Biden can point to a string of positive developments for his administration this week for the first time in a long while. But he will need, at the very least, many more weeks like this to reverse his political fortunes ahead of the midterms.

Police take down leading gang with help of undercover agent

US to allow in fully-vaccinated travellers