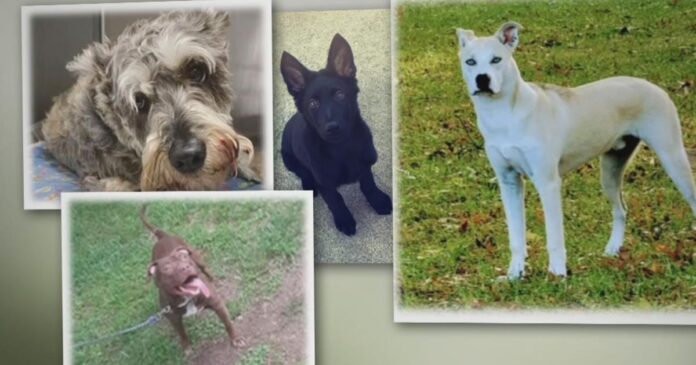 Someone in town is brutalizing and killing neighborhood pets. There have been four dogs attacked in the last several months, and it appears each attack gets more violent.

It started with Zeus—a Miniature Schnauzer. He was shot and nearly bled to death. Police followed his trail of blood and found him. He was taken to a veterinarian and survived. His treatment cost his owners $6,000, but they say Zeus is worth it.

“He is the best dog I’ve ever had,” said Jason Jones, Zeus’ owner. “I never would have expected it.”

There was a conviction in that case, but the attacks didn’t stop and the brutality escalated.

Bleu was next. He was well-known in the neighborhood and was described as a friendly dog. He was also shot. He was still alive when he was found limping in an alley, but could not be saved. The bullet traveled through his body and caused extensive organ damage.

Less than a month later, a third attack. Ranger was a pure bred black German Shepard puppy—just three months old. Ranger was in his owner’s fenced backyard with another pet at the time of the attack. Police believe Ranger was taken from the yard and beheaded. The killer then returned the decapitated body and muzzle to the backyard.

Ranger’s owner is a Parsons police officer. Police believe Ranger’s attack was targeted. The officer’s marked car was in the driveway.

“To see that corpse in that backyard, was I mad? Yeah,” said Chief Robert Spinks of the police department.

Just about two weeks after that, children discovered four-year-old Drako, a pit bull mix, wrapped in blanket and tied with a rope. He was dumped in a creek.

A post-mortem exam revealed Drako was tortured before his death.

“He had severe trauma and both his chest and that he was probably choked, until he was dead,” said Chief Spinks.

The department is taking the cases very seriously.

Police officers went to more than 250 houses in a three block radius looking for surveillance video.

They’re distributing a flyer with information about the killings. There’s a reward of nearly $40,000 for information leading to an arrest. There is now a criminal profiler working on the case—she’s volunteered her services.

“We certainly don’t want to see this individual ramp up into other kinds of crimes,” said Chief Spinks. The attacks escalated from a shooting, to a beheading, and torture.

The chief calls these “gateway crimes” that could evolve into something even worse.

That is a concern for other dog owners in town.

“This is not something that usually happens in Parsons,” said Anna Smith. We caught up with her while she was walking her dog, Lucy. “Definitely, I feel like (there’s) a serial killer in the making.”

People in Parsons are being warned by police to watch their pets and children.

Anyone with information is asked to call the Tip Line at 421-7057 or email at tips@parsonspd.com.

Fees re-filed in opposition to rapist who accused ex of murdering...

What’s behind the onscreen infatuation with haredim?