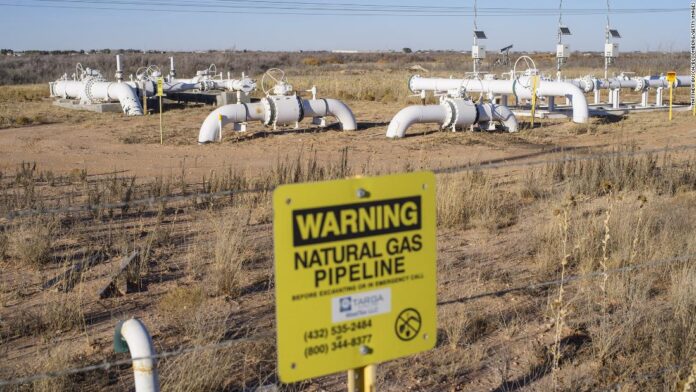 “As families across the country continue to face steep residential energy and heating costs, we urge you to take swift action to limit US natural gas exports and examine their impact on domestic energy prices,” the lawmakers wrote in a Wednesday letter to Energy Secretary Jennifer Granholm.

The letter, signed by 10 Democrats as well as Senator Angus King, an independent who caucuses with the Democrats, calls for the Energy Department to conduct a review of liquefied natural gas (LNG) exports and develop a plan to keep gas affordable for Americans.

“Until such a plan is completed, the Department should consider halting permit approvals of US LNG export facilities,” the lawmakers wrote in the letter, which was also signed by Senators Jack Reed, Elizabeth Warren and Richard Blumenthal.

The pressure on the Biden administration, from its own party, comes at a tricky time.

Home heating costs are rising sharply due in large part to higher natural gas prices — and that is contributing to historic inflation. The federal government recently estimated that energy costs for natural gas-fueled homes will climb by 30% this winter. And that forecast was issued prior to a recent spike in natural gas futures caused by concerns about major winter storms.
Yet US natural gas also provides national security benefits, providing US allies in Europe and elsewhere with a viable alternative to gas from Russia, which has been accused of weaponizing its own energy supplies. The United States recently surpassed Qatar and Australia to become the world’s leading exporter of LNG.
In fact, US officials have been in discussions with a number of countries and companies in Europe, the Middle East, North Africa and Asia about stepping up production of LNG to Europe in the event of a disruption caused by Russia-Ukraine tensions. Russia is the world’s second-biggest natural gas producer, behind only the United States. And Ukraine serves as a vital transit hub for natural gas.

In the letter this week, the lawmakers acknowledged there are “geopolitical factors” to consider when making LNG export policies, including the calls for US exporters to provide more shipments to Europe to ease impact of potential Russian supply disruptions.

“However, the administration must also consider the potential increase in cost to American families because of higher export volumes,” the lawmakers said in the letter.

A Biden administration official told CNN that it is not currently considering such a measure.

“A ban on exports is not something actively under consideration at the moment — but again — the administration continues to have a number of tools at its disposal.”

Mike Sommers, the CEO of the American Petroleum Institute, told CNN in December that he’s “concerned” about the risk of a natural gas export ban. Sommers, whose group represents Cheniere and other gas exporters, pointed to how US allies in Europe and Asia have long-term contracts to buy US LNG and banning those shipments would force them to turn to Russia and China for energy.

“One really good way to ruin our standing in the world is to violate those contracts at a time of high energy costs,” Sommers said.

4-year-old boy dies from gunshot wound after playing with a gun, police say

Authorities arrest man accused of stealing car with baby inside, and later dumping the child on the road

A Beloved Black-Run Bookstore in Los Angeles Is Closing

Who Will Help Care for Texas’ Post-Roe Babies?

Local singer finds her way back to music after battling addiction