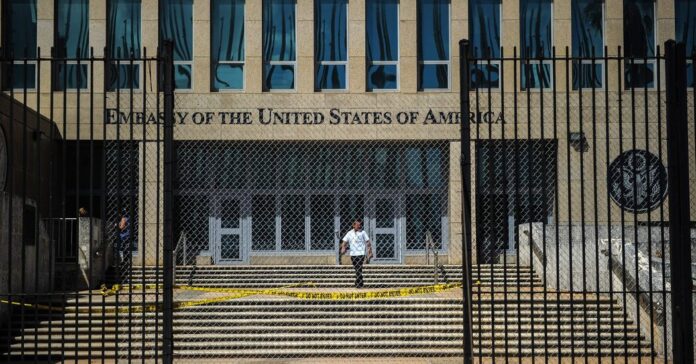 WASHINGTON — A panel of experts assembled by the Biden administration concluded on Wednesday that stress or psychosomatic reactions could not explain some of the incidents of Havana syndrome they had reviewed, and said that radio waves could have caused some of the injuries among C.I.A. officers and diplomats.

The panel, which included both government scientists and outside experts, did not try to determine who was responsible for the incidents, and officials said the conclusions did not contradict interim findings by the C.I.A. that unexplained incidents were not the result of a sustained global campaign by Russia or another adversary.

But there are tensions between the panel’s work and the C.I.A.’s conclusions. The panel’s findings could bolster the arguments of victims and lawmakers who believe a hostile foreign nation could have caused at least some of the injuries associated with Havana syndrome, perhaps by using a listening device.

The panel’s conclusions also undercut the arguments of some outside experts that mass hysteria, stress or psychosomatic reactions were the cause of the incidents. The panel found that stress reactions could have contributed to ongoing symptoms, but that no so-called functional illness or mass hysteria could explain the initial injuries in the cases that were the focus of its investigation.

Intelligence officials briefed on the panel’s findings did not say how many cases it had focused on, though they said between 10 and 20 victims were interviewed. They said the panel focused on cases in which victims heard a strange sound or felt pressure and then experienced a loss of balance and ear pain. In addition, the panel focused on cases in which the victims reported the sounds as coming from a specific direction.

The panel, assembled under the Office of the Director of National Intelligence and the C.I.A., was given access to more than 1,000 classified documents as well as medical records of some victims. Its mandate, officials said, was to determine what mechanisms could have plausibly caused the injuries.

The panel identified one potential cause as what it called pulsed electromagnetic energy, particularly in the radio frequency range, also known as directed energy. The panel said ultrasound also could have caused some of the injuries. That mechanism, however, is less likely, since any ultrasound device has to be much closer to people to injure them.

The panel ruled out the possibility that chemical and biological agents, ionizing radiation or audible sounds could have caused the unexplained injuries.

Havana syndrome was named after injuries reported by a group of C.I.A. officers and diplomats working in Cuba beginning in late 2016. Since then, incidents have been reported in 70 different countries, officials said. While some senior Trump administration officials viewed the incidents skeptically, the Biden administration came to office last year pledging to redouble efforts to learn their cause.

The Biden administration has assigned the task of attributing who is responsible for the unexplained cases to a C.I.A. analytical team known as the Global Health Incident Cell. That team reported in January that a majority of incidents could be explained by environmental factors or undiagnosed medical conditions. While the team ruled out a sustained global campaign to injure American spies and diplomats, the C.I.A. said it was continuing to look at several dozen cases.

Other officials have said the number of unexplained cases is closer to 100.

The panel’s findings suggest that in at least some of those cases, a hostile country could have used a directed-energy or ultrasound device to injure American officials either on purpose or inadvertently.

There is a consensus among American intelligence agencies that there was not a broad campaign by a single nation to injure U.S. spies and diplomats deliberately, officials said. But that does not mean that foreign adversaries were not involved in a limited number of incidents.

In an interview ahead of the release of the panel’s conclusions, Senator Susan Collins, Republican of Maine and a member of the Intelligence Committee, said she had hypothesized that eavesdropping devices using some form of energy had injured people in various locations.

“My theory has always been that it was some sort of collection device, and it wasn’t targeting people, rather their computers, their phones, their secret information,” said Ms. Collins, who has sponsored a bill called the Havana Act to compensate victims. “The injuries and illnesses were, if you will, collateral damage from the collection device.”

A group of victims who had been critical of the C.I.A.’s interim report released a statement on Wednesday saying that the panel’s work should have been included alongside the agency’s findings to present a fuller picture.

Mark S. Zaid, a lawyer who represents multiple victims of Havana syndrome, said that there needed to be more coordination in the government investigations, and that the inquiries needed to look at incidents further in the past.

“These piecemeal agency reviews at times reveal inconsistent and even contradictory results that undermine the effort to resolve this controversy,” Mr. Zaid said.

What is the Havana Syndrome? The mysterious illness, which has affected military officers, C.I.A. personnel and diplomats around the world, manifests itself in a host of ailments such as chronic headache, vertigo and nausea.

What is the source of the illness? Some officials are convinced that the symptoms are caused by Russian microwave attacks, but there is so far little evidence to support the theory. Outside experts have also suggested that the condition could be a psychosomatic reaction to stress.

On Tuesday, the White House announced that Maher Bitar, the senior director for intelligence on the National Security Council staff, would serve as the coordinator to oversee the investigation of the anomalous health incidents.

Intelligence officials insist the work done over the past year has been coordinated and say it is wrong to describe the panel’s findings as undercutting the C.I.A.’s analytic work. While pulsed energy or microwaves could, scientifically, cause unexplained brain injuries and the kind of symptoms associated with Havana syndrome, that possibility does not prove that a hostile country used those means to injure Americans, an intelligence official said.

Another report began being circulated by the State Department on Wednesday. That report, completed late last year by JASON, an independent group of scientists, looked at about 200 cases and said credible explanations had been found in all but 20 to 30 of them. Those remaining cases, the group found, were more complex and defied easy explanations.

The report, which was commissioned by the State Department’s Bureau of Diplomatic Security, said it was not possible to conclude whether the Havana syndrome symptoms were caused by an intentional attack. But the group could not rule out the possibility of “mechanisms that do not cause any physical harm but which might constitute harassment and lead to health conditions and functional disorders.”

The report eliminated some forms of directed energy as potential causes but said others were possibilities. Officials said the report looked at a subset of the data examined by the intelligence agencies’ panel.

The intelligence agencies’ panel recommended improving the collection of incident and medical data, and it called on doctors to work to identify new medical markers that could be detected in victims and help identify future Havana syndrome cases. In the long term, the panel said that better methods needed to be developed to diagnose inner ear injuries immediately after incidents occur.

The panel found that the use of a directed-energy device was theoretically possible, but it did not identify a specific device that could have caused the injuries, intelligence officials briefed on the findings said.

The panel’s membership included some members of a National Academies of Sciences, Engineering and Medicine group that concluded last year that a directed radio frequency energy device or microwave device could have caused the injuries associated with Havana syndrome.

Some intelligence officials believe that the sustained use of a collection device, particularly if multiple adversaries had used it, would have been detected by the United States. But hypothetically, a collection device or other piece of equipment used by a foreign adversary could have caused collateral health effects without the other nation being aware of the damage, at least initially.

Officials said there was no consensus yet on the hypothesis that an eavesdropping device could be involved in a limited number of cases, in large measure because the United States has not identified a device that could have caused the injuries and has not determined that such a device was used near the unexplained incidents.

Despite a landmark toll from Covid, there is still no U.S....