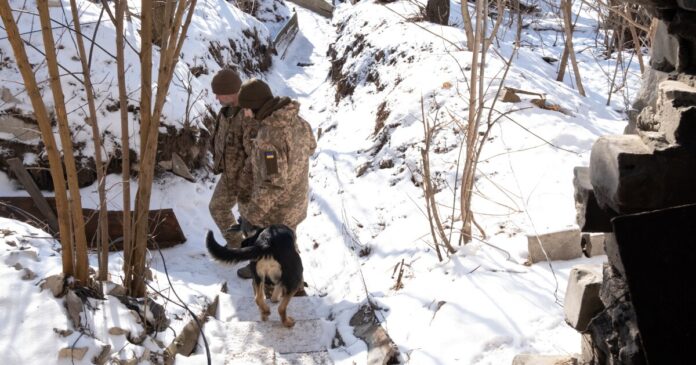 In his raspy smoker’s voice, the middle-aged Ukrainian soldier urged a visitor to hurry through a stretch of muddy trench that traversed an open clearing.

Gesturing eastward, he warned of snipers lurking only a few hundred yards away.

“We must run until we reach cover,” he said.

On the front lines of Ukraine’s long-running conflict with Russian-backed separatists, the smells, sights and sounds are in many ways reminiscent of trench warfare waged more than a century ago in Western Europe during World War I. The slog of fighting could also serve as an ominous precursor of what could flare into the continent’s first major land war in decades.

While the world’s attention is faced on high-stakes diplomacy aimed at staving off a new Russian incursion, this grinding standoff in eastern Ukraine has for years remained largely out of sight — except to weary combatants and a handful of unfortunate civilians who have nowhere else to go.

“It’s an experience I wouldn’t wish on my worst enemy,” said Sofia Anatoljevna, one of only eight residents who remain in the “red zone,” a heavily militarized area that includes the ruined village of Pisky. At 83, she is partially blind, with no relatives to help her and no means of resettling elsewhere. Her son died in earlier fighting.

The fierce combat that broke out eight years ago between Russian proxies and Ukrainian forces in two separatist statelets was at least partly overshadowed at the time by Russian President Vladimir Putin’s seizure and subsequent annexation of the Crimean peninsula, some 320 miles to the southwest.

That brazen grab drew Western opprobrium and tough sanctions, but the strategic Black Sea peninsula remains firmly in Russian hands, and Putin — who considers the 1991 breakup of the Soviet Union to be one of history’s great catastrophes — has redoubled his insistence that Ukraine, an independent country of more than 40 million people, is inextricably linked to Russia.

For weeks now, the Russian leader has signaled he might be poised to tear away another chunk of Ukraine. More than 100,000 Russian troops, with tanks and artillery, are massed near Ukraine’s borders, and the Kremlin has batted aside both threats and appeals from Western interlocutors.

The latest of those came Friday in Geneva, as U.S. Secretary of State Antony J. Blinken and Russian Foreign Minister Sergei Lavrov met for 90 minutes with no outward sign of progress.

Moscow renewed its demand that NATO pledge that Ukraine will never become a member of the alliance; Blinken told Lavrov to expect written U.S. responses to Russia’s proposals next week.

But public assessments by both U.S. and European officials have been bleak.

“My guess is, I think he will move,” President Biden said this week, when asked whether Putin was likely to send in troops despite U.S. and European vows of severe but unspecified consequences in the event of an invasion.

Along the “line of contact” between Ukrainian and Russian-backed separatist forces in eastern Ukraine, the diplomatic maneuvering can seem like an abstraction compared with the harsh realities of daily existence.

In Pisky, rows of crumbling concrete apartment blocks and bullet-ridden houses are testament to chaotic combat during 2014 and 2015, before a tenuous cease-fire took hold.

But the fighting never really stopped, an unreconciled history on a frozen landscape.

“There are no big changes here — there is always a danger for us,” said the 46-year-old Ukrainian serviceman navigating the muddy trench, whose name was not allowed to be publicized under army rules. Soldiers who have been identified in news accounts have found themselves and their families attacked and threatened by online trolls.

On a crisp, sunny morning this week, snow coated the ground and slicked the interiors of the meandering network of narrow trenches. The Ukrainian defensive line runs the length of the de facto border of the Donbas, the colloquial name for the Donets Basin, a mining and industrial region.

The Ukrainian troops are well aware the harsh conditions hark back to battles from a bygone era. Canadian trainers who visited, they said, were taken aback by what they saw, never having experienced trench warfare themselves.

Every few hundred yards there are observation points where Ukrainian soldiers can view enemy movements through binoculars or periscopes. The unpredictability is nerve-racking; sometimes there is incoming fire for days in a row, followed by a week of silence.

Such lulls are considered the most dangerous times, soldiers say, because it’s so easy to let one’s guard down. In the summertime, under cover of long grass, separatist fighters can come within 50 yards of the trenches.

Frontline fatalities, from snipers and occasional shelling, are a regular occurrence. The noncommissioned junior officer showing a journalist around tallied up 29 comrades in arms he knew personally who had died in fighting since 2014. He himself suffered a traumatic brain injury in 2015, when a shell landed near him, and spent two months in a hospital.

Data from monitors for the Organization for Security and Cooperation in Europe, or OSCE, recorded 80,000 explosions in the separatist regions since 2018, when the monitoring began. In all, the conflict has claimed more than 14,000 lives.

The privations of the front lines sometimes yield a bizarre yet tender domesticity. An army couple named Nika and Alexander, who met five years ago, live together in a makeshift bunker. Their room is warm and well lit, with a comfortable bed.

He is 47 and she is 50; Nika says their field existence has come to feel like a normal life.

Above their bunker home is a mess hall and billets for other troops. Soldiers cook homestyle meals and play with adopted dogs, some of them the offspring of abandoned domestic pets whose owners fled.

In the trenches, there are few illusions about the strength of this defending force against a full-scale invasion by the far more powerful Russian military, should it occur. But Ukrainian officers say the battlefield picture is different than it was in 2014.

“We are prepared,” he said.

Longtime Putin watchers say the stakes in Ukraine have repercussions far beyond the region. Fiona Hill, an author and former senior official for Russia affairs at the U.S. National Security Council, said Moscow’s moves amounted to a threat to the entire postwar order.

“If Russia can do this to Ukraine, what’s to stop countries doing this to neighbors?” she said on “Newsnight,” a BBC current affairs program. “This is exactly what we fought two world wars against — we’ve had a whole system in place that’s supposed to be pushing back against…. This is really one of those game-changers internationally.”