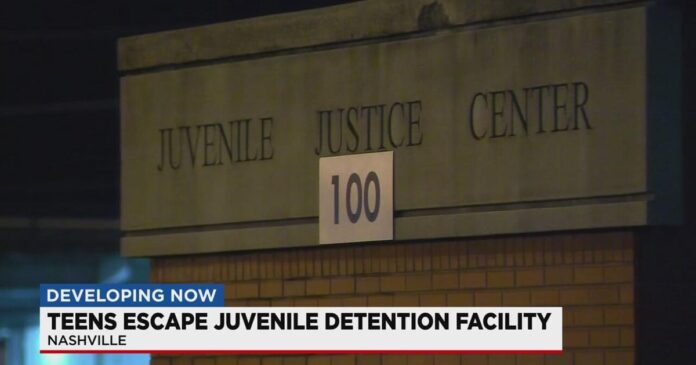 NASHVILLE, TN (WSMV) – Metro Police are looking for three juveniles who escaped from a detention facility on Sunday.

When the three teenagers ran away on foot from a DCS facility early Sunday morning, they became the latest to escape from a facility in Nashville run by the company Youth Opportunity Investments in the past five years.

MNPD identified the escapees as 16-year-old Ervyon Moore, 15-year-old Bruce Johnson and 17-year-old Bryon Reid. The boys escaped around 11:30 p.m. Saturday night after allegedly overpowering a guard and fleeing on foot from Rosewood Youth Academy. Police said they are believed to still be wearing their facility-issued blue pants and gray shirts.

Rosewood is a DCS facility for boys ages 13-19 in state custody operated by Youth Opportunity, a company out of Indianapolis.

In 2017, a juvenile, under the supervision of Youth Opportunity employees, was able to escape through a bathroom before falling through a ceiling.

In 2019, four teenagers escaped from the downtown detention center following mistakes made by Youth Opportunity employees, including how the offenders tricked staff into letting them ride the elevator to the basement and how one employee waited 30 minutes to call police.

In 2020, the president of Youth Opportunity was brought in before the metro council to face criticism about how easily the teens were able to escape.

Youth Opportunity did ultimately retain their contract to operate the Juvenile Justice Center and also took over the contract for Rosewood Youth Academy.

A spokesman for DCS said they would be evaluating how the teens escaped from Rosewood.

News4 Investigates did email two different staffers with Youth Opportunity to ask for an interview but did not get a response by our deadline.

Anyone with information on their whereabouts is asked to contact the Emergency Communications Center at 615-862-8600.

WSMV.com is now with you on the go! Get the latest news updates and video, 4WARN weather forecast, weather radar, special investigative reports, sports headlines and much more from News4 Nashville.

California’s Governor Was Examined by the Pandemic. Now a Recall Looms.