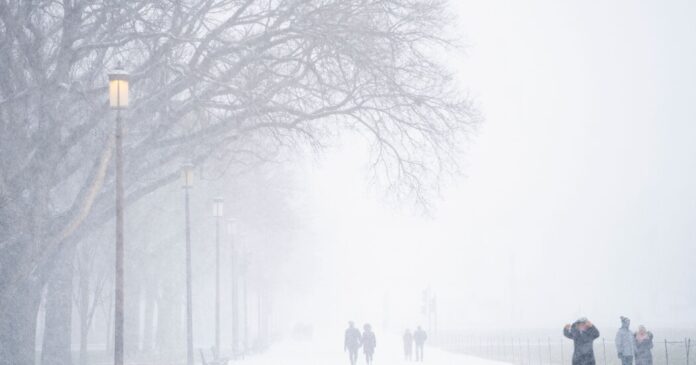 After slamming parts of the South over the weekend, a strong winter storm was pushing north on Monday, producing heavy snow over parts of the Lower Great Lakes, Central Appalachians and the Northeast. Rain was forecast for the coast of New England.

As of early Monday, a winter storm warning stretched from western North Carolina up through Maine, according to the National Weather Service.

Most of the New York City area, including parts of New Jersey, was under a coastal flood warning or advisory, the Weather Service said. Up to four inches of snow and ice was expected for interior parts of New Jersey and the Hudson Valley. New York City was forecast to see a light coating of snow with spotty freezing rain before changing over to plain rain.

“It is going to be solidly a rain event overall for the New York City area,” said David Stark, a meteorologist with the National Weather Service. Wind gusts of up to 50 m.p.h. were of greater concern than snow or rain, he said.

The storm had also affected air travel. By 6 a.m., more than 200 flights had been canceled out of the Charlotte Douglas International Airport, according to FlightAware. Dozens of flights out of Ronald Reagan National Airport were also canceled. Out of an abundance of caution, Amtrak canceled more than a dozen trains on Monday, including service between Washington and Chicago and service between Harrisburg, Pa., and New York.

The storm has left thousands without power.

Over the weekend, the storm wreaked havoc over parts of the South. Two people were killed in a car accident east of Raleigh, N.C., after driving off the road into trees, The Associated Press reported. They were pronounced dead at the scene.

The storm also left thousands without electricity across nine states. As of Monday morning, about 200,000 customers from Georgia to New York were without power, according to PowerOutage.us, which aggregates data from utilities across the United States.

In the South, where some governors declared states of emergency, areas such as central Mississippi and central North Carolina had received more than nine inches of snow, while parts of central South Carolina had up to a half-inch of ice, the National Weather Service said.

“This storm is going to be pretty significant in terms of generating travel impacts, outages and things of that nature,” said Rich Otto, a meteorologist with the Weather Service.

More than a quarter-inch of ice accumulated in parts of the Piedmont regions of North and South Carolina on Sunday, said Frank Pereira, a meteorologist with the National Weather Service.

Gov. Roy Cooper of North Carolina warned residents at a news conference on Sunday to stay off the roads because parts of the state had received up to a foot of snow.

“For today, the best way to avoid a car accident or getting stranded is to stay put,” he said.

The storm system also spawned two tornadoes in southwestern Florida on Sunday morning, the Weather Service said. There were no reports of deaths, local officials said.

Three people were treated for minor injuries, and there was widespread damage, including to 108 mobile homes in three parks in the Iona McGregor section of Fort Myers, Fla., said Richard Rude, a meteorologist with the National Weather Service in Tampa. About 200 people were displaced, local officials said.

How the Omicron Surge Is Straining California’s Health Care Workers